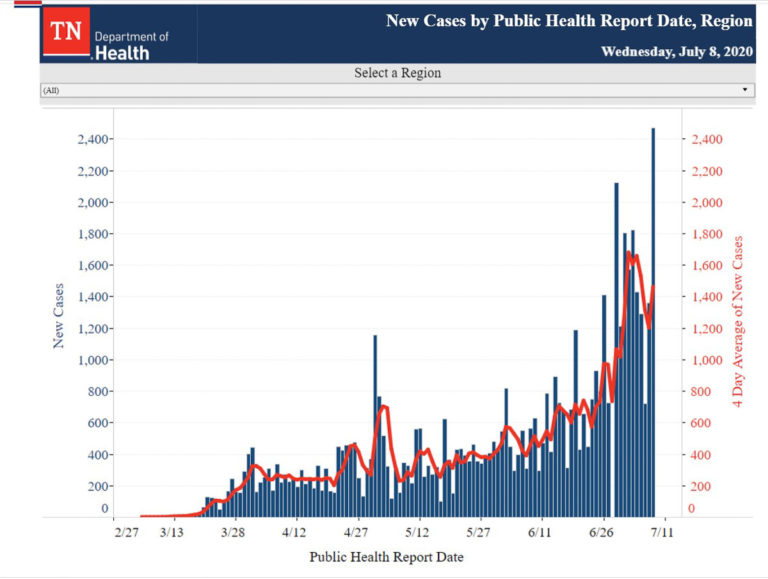 As the country, state and county continue to hit new levels of infection numbers, attention continues to be focused on both the illness and attempting to navigate normal life. Many businesses remain frozen in place or diminished and school opening dates are looming. While early in the pandemic we discussed economics and health as it the two were mutually exclusive choices, it has become apparent that all of it ultimately flows together. May we navigate the months ahead with intelligence and grace.

At the time of this writing, there are 12,251,869 confirmed and reported cases of COVID-19 worldwide since the beginning of the pandemic. 554,031 deaths have been attributed to the disease across the world. Yesterday, 213,279 new cases were reported, along with 5,518 deaths. The number of new cases is the second highest since the beginning of the pandemic, second only to the total from five days earlier. There have been more than 200,000 new cases announced on four separate days and each of them have been within the last week.

The number of deaths announced yesterday is the highest total since June 16 and marks the first back-to-back days over 5,500 since early May. While the global decline in deaths has been heralded as the silver lining of the last three months, the seven-day average has climbed each of the last four days and now sits at just over 4,700 deaths per day. The average peaked on April 18 at 7,036 before dropping to a low of 4,106 on May 26.

As has been the case in recent weeks, three countries contributed about sixty percent of the world’s new cases yesterday: the United States (61,848), Brazil (41,541) and India (25,571). While the U.S. has conducted extensive testing (14th highest per capita in the world in countries with at least 1,000,000 population), Brazil has tested only about 1/6 the rate of the U.S. and India’s testing program is negligible on a per capita basis, at about 1/3 that of Brazil.

Deaths tend to follow cases and the countries reporting the highest death tolls yesterday are also near the top in recent cases. Leading the world in deaths (in order) are: Brazil, Mexico, the U.S., India and Peru. Even though they sit at the top, it is likely that deaths have been drastically under-counted in four of those five countries.

As top-heavy as the lists may be, there is also wide-spread global infection from the virus. Twenty-four different countries reported at least 1,000 cases. The length of this list has steadily grown over the last month. Among those 24, the Americas continues to be the hottest spot (9 countries), with other major areas including the Middle East and southeast Asia.

Countries outside those regions with significant problems include South Africa and Russia, though the numbers, particularly of deaths, from Russia have seemed drastically under-counted since the beginning. No European countries are currently among the top ground for new cases.

In what might be seen by some as an ironic comment, the WHO has  announced a new panel to examine global response to the pandemic, decrying a “general lack of leadership,” around the world.

Yesterday, the U.S. reported 61,848 new cases, the highest single-day total since the beginning of the pandemic. The number of cases broke the previous record of 58,910 set six days earlier. The seven-day moving average of new daily cases is now 54,265, the highest it has been during the pandemic. The previous peak in cases, which prompted a near national shutdown was about 32,400 in early April.

The U.S. reported 890 additional deaths from the illness yesterday. Deaths in the U.S. have declined dramatically since their peak in mid-April. The last three days have each seen increases in the seven-day moving average, which currently sits at 585 deaths per day. A similar three-day uptick in deaths occurred at the end of May and, just as it did not indicate a reversal of the downward trend, this one may not, as well. We’ll likely know by next week.

The states with the highest numbers of deaths continue to shift towards those that have had the largest recent outbreaks. California reported 150 deaths yesterday, far topping its single day record set last April. Texas reported 121 deaths, breaking the record of 85 deaths in a single day it had set just the day before. Although numbers for today are not complete, enough have come in to verify that Florida will also break its previous single-day death record today by a large margin.

About 1,000 TSA workers have tested positive during the pandemic and that number continues to rise. Looking at the issue through an economic lens, Goldman Sachs advocates for a national mask order which their research indicates would help save the economy and avoid another broad-based lockdown. For the first time in months, Disney World has chosen today to resume ticket sales. The park is set to open Saturday. Debate has begun about who should get any new vaccines first, as there will likely not be enough, initially, for broad usage.

The state of Tennessee reported 2,472 new cases of COVID-19 yesterday, to bring the pandemic total of positive tests to 55,986. This is the highest single-day total of new cases since the beginning of the pandemic and breaks the five-day-old previous record by 35%. As noted above, it was the sixth largest single-day total in the country for the day.

Tennessee State Health Commissioner Dr. Piercey stated in Governor Lee’s press conference yesterday she is concerned with lab turnaround time. Saying she’s heard of 7 to 12 days response time and that is not acceptable as people have to quarantine until they get results. She said labs are getting maxed out nationally. The state is working to help increase capacity in their own labs and with partners.

She also stated that yesterday’s number of positive test results is related to the surge in testing and said the positivity rate is a better indicator and that is currently “8.3%, which is in line with what we have been seeing.” She said it must be understood in that context and, “I’m not additionally concerned today any more than I was yesterday, which was a high level of concern.”

The positive test result rate she mentioned is slightly higher than the number given by Johns Hopkins, which currently sits at 8.0%. To review, that rate should be 5% or lower for 14 consecutive days to demonstrate a majority of cases are being found. Additionally, the average has been increasing in a trend that goes back to early May.

The state also reported that 909 additional people are considered to have recovered, as of yesterday, and 20 people died. Currently active cases increased for the day by 1,543 to a total of 22,565. The 20 deaths brought the pandemic total to 685 and was the third highest single-day total since the beginning. It is the largest single-day total since June 12 when the current record of 27 was set.

Closer to home, the Knox County Health Department reported 65 additional cases today, bringing the total since the beginning of the pandemic to 1,485. They report 667 currently active cases, an increase of 51 since yesterday. Out of 99 people hospitalized since the beginning of the pandemic, 34 Knox County residents are currently hospitalized, the same number as yesterday. No additional deaths were reported and there are 36 cases listed as probable.