A Walk Around Rocky Top (The Campus, Not the Town) 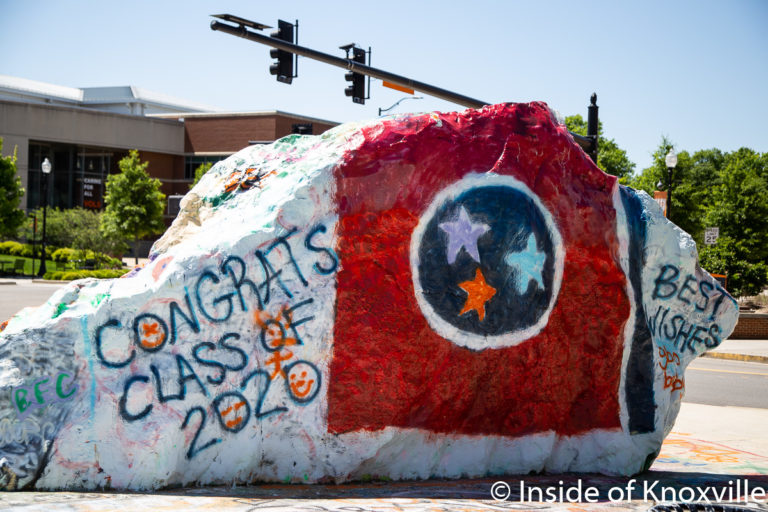 With all the conversation about schools this week, it put me in mind of a walk I took in early May around the UT campus. Many of us are UT graduates and many more are sports fans of the university, so the campus has and continues to play an important part in our lives and our community. During the month of May, of course, the campus was much more quiet than usual, with students dismissed from classes early this spring. Still, I found a few graduates floating around.

As we’ve turned our attention to the looming school year and all the questions that surround it, it’s worth taking a moment to acknowledge all the graduates that didn’t graduate in a traditional fashion. No, graduation ceremony’s rarely change our lives, but they are at least a moment of recognition for hard work before the real world imposes its will on our lives.

It was not only college graduations that were altered, of course. Many high school graduations were lost. Even smaller transitions, like the last days at middle or elementary school. Urban Girl finished fifth grade and missed her trip to Washington with her safety patrol friends, which she’d anticipated as her final moment with her first real set of friends.

I enjoyed my walk around campus and thought about how much it has changed since I took my first class there somewhere around 1983 or 1984, or even since I got a degree from the university in 2001. (And no, before somebody cracks the joke, I did not take nearly twenty years to graduate. It’s a long story.)

Remember when UT was declared one of the ugliest universities in the country? This link was from 2013. If you’ve been to many major college campuses, you might understand where the ranking came from. Compared to any number of campuses, the UT campus has left something to be desired in terms of green space, modern architecture, pedestrian friendliness, etc.

It’s certainly changed quite a bit since that dubious recognition. The new student center seems to be quite an improvement. The pedestrian mall through the center of campus made it much more appealing. I really like the library and always have, even though it was compared to a child’s lego set in one article I read. I’m mixed on some of the newer buildings.

Construction continues and was moving forward even as I walked through the mostly deserted campus. More living space for students is on the way. It’s hard not to wonder if perhaps we’ve over built. It was a thought before 2020, but it is a definite thought for many at this point. Some people feel students may return to college campuses in smaller numbers for years to come. Or not. Nobody really knows.

One tiny discovery on my walk was the Native American Interpretive Garden on the west end of campus. I had no idea it existed. It’s small, but a nice spot to stop and nose around a bit on a pretty spring day. I’d recommend you look it up.

I needed a quiet ending to this week. Just photos from a peaceful little walk to smooth some of the angst. Thanks for walking along with me.