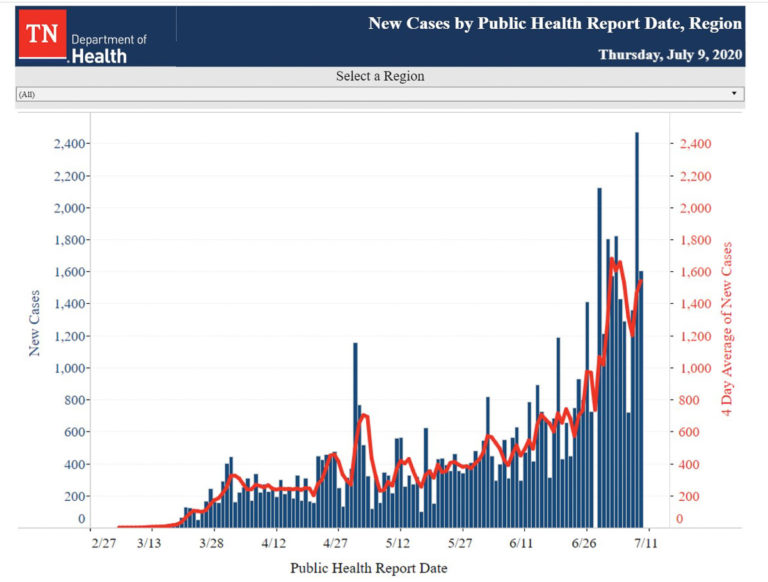 Welcome to the weekend. I wish the news was better. Please spend some time taking care of yourself and your family. I hope you find some joy and rest. Please do so safely.

There are currently 12,434,907 confirmed and reported cases of COVID-19 across the world and 558,416. Yesterday an additional 223,230 cases and 5,411 deaths were added to the toll. The daily number for worldwide cases set a new record by almost 10,000 cases over the previous high number, which was set one week earlier.

Deaths across the world are no longer declining. Whether it is a pause in the decline or an indication of a new rise will be clear in coming days. The seven day moving average for daily deaths is now 4,760 after dropping as low as 4,106 per day on May 26. As of yesterday, the rate has risen five consecutive days. Brazil, the U.S. and Mexico continue to lead the world in daily deaths.

Previously reported patterns among the countries largely held. Almost 60% of the world’s new cases were attributed to the three leading countries: the United States (61,067), Brazil (42,907) and India (25,790). The regions most impacted remain the same.

I’ve mentioned South Africa as a concern for some weeks, but it has now emerged with the full outbreak that has been coming. Yesterday, the country reported 13,674 new cases. While small by the standards of the three countries above it (it was 4th in the world), the curves of new daily cases and deaths in South Africa are staggering. The country now has the 13th most cases in real numbers in the world and will likely pass Italy, Pakistan and Iran to enter the top ten today or tomorrow.

Twenty-four different countries each reported at least 1,000 new cases yesterday. Nine of them are in Central and South America. Some of these countries have very little testing and relatively small populations. Given those two variables, their inclusion almost certainly means the disease is much more widespread than reported. There are no European countries on the top portion of the list. Israel has re-emerged as a hot-spot after seemingly having the virus under control.

As England struggles to emerge from the worst of its pandemic, Leicester has been returned to a near-total lockdown. The country has opened up travel from over 50 countries around the world, but continues to exclude U.S. citizens. Australia has cut international arrivals by half, while Bolivia’s president has tested positive for COVID-19 along with Venezuala’s Socialist Party leader.

Since the beginning of the pandemic, 3,240,268 Americans have been diagnosed with COVID-19 and 136,022 people have died with the illness. Yesterday, the United States reported 61,067 new cases and 960 additional deaths. The number of cases fell just shy of the record set the day before. The seven-day moving average, which continues to rise, set a new high of 54,800 new cases per day.

Deaths appear to have stopped the decline of recent weeks. While there is some upward movement, it won’t be clear to me whether this represents a reversal until we have more data. That said, there is no question that we’ve had at least a momentary increase in deaths. For the fourth consecutive day, the seven-day average has moved upward and now sits at 625 deaths per day after declining as low as 516 on July 5.

Deaths are being led by some of the states with most recent outbreaks, but also by one state which experienced one of the earliest outbreaks. The four states reporting over 100 deaths yesterday included California (137), Florida (119), New Jersey (106), and Texas (102). It was California’s second highest death toll, after setting its record the previous day and the same was true for Texas. Florida established a new daily high, as did Arizona two days earlier.

A number of states are now reaching maximum capacity in hospitals in some parts of their state. The Harvard Global Health Institute is recommending that Florida, Georgia, Arizona, Louisiana and South Carolina institute statewide lockdowns and say other states should be considering it. Kentucky has required masks statewide, five of the largest medical centers in Mississippi have no ICU beds and Dr. Fauci says that he has not spoken directly with President Trump in over two months, while President Trump on Thursday called Dr. Fauci a “nice man,” but said “he has made a lot of mistakes.”

Yesterday, the state of Tennessee reported 1,605 new cases of COVID-19 to bring the total number since the beginning of the pandemic to 57,591. 873 people were said to have recovered and 25 people died. With the increase of 707 active cases for the day, the state now has 23,272 active cases.

65 additional people were hospitalized yesterday, bringing that total to 842 COVID-19 positive patients currently hospitalized, and 342 additional cases pending. Over 21,700 tests were administered yesterday, bringing that total to over 972,000. Interestingly, Tennessee has gotten some national kudos for testing, yet the positive test result rate has remained high and cases are surging. A thorough new article from the New York Times points out the state program’s limitations.

Deaths in Tennessee hit 25 for only the second time, yesterday. The previous time was June 12 at which time we had 27 deaths. The seven day average for deaths has not reached 10 at any point during the pandemic until yesterday, at which point it reached precisely that number. Today the seven-day moving average for state deaths is 13.

In other local news, three members of the Sheriff’s department have tested positive for the virus. Sevier County is requiring masks starting today. The New Sentinel is reporting that Copper Cellar employees were told not to make a big deal over customers wearing masks. Knoxville was identified as one of 14 spots across the country meriting increased attention from the CDC and FEMA due to increases in cases and hospitalizations. TEMA is working to identify resources should more beds be needed in the county.

Charity Menefee chaired today’s meetings, expressing gratitude to the team helping with business education for the community. She noted that the Board of Health will meet on Wednesday.

She noted that long wait times (more than an hour) are currently happening at KCHD due to demand. They are testing over 400 per day at the site. She also noted that a negative test is only a snap-shot in time and encouraged continuing to follow guidance, including masks. She confirmed the above numbers. She noted there is an issue with current total hospitalization numbers, which they hope to resolve by next week.

She said at 708 active cases, the virus is more active than it has been at any point. She said this is what we know. It is spreading, and sending people to the hospital, even as it is killing people. She implored everyone to look out for others by wearing a mask and keeping distance. She said we have the power to reduce the spread and to save lives.