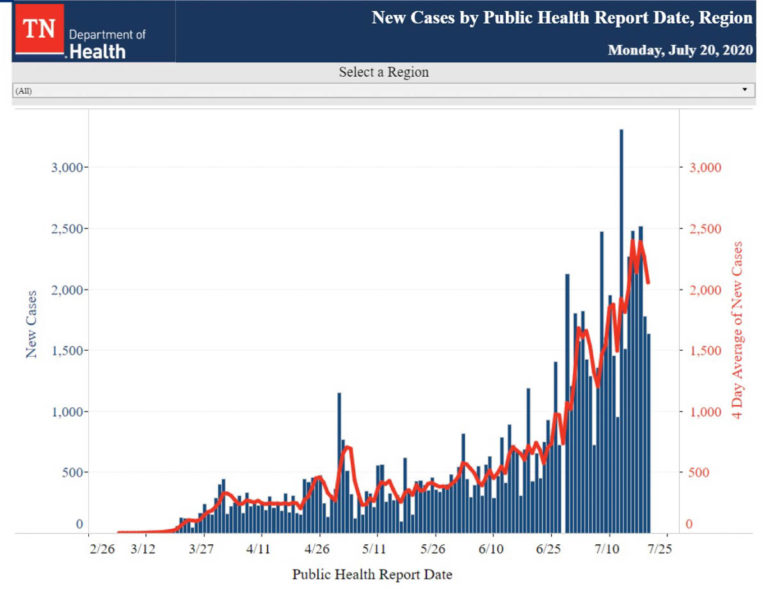 Good Tuesday. Hopefully, you made it out of Monday without too many scars. Maybe today will bring you a little hope or uplift. Maybe you could be that little bit of hope or uplift for someone else. I think there may be a few hopeful signs scattered about in the numbers. Maybe small, maybe illusory, but it’s something to get us through a Tuesday. Let’s take a look.

To date, 14,882,601 people worldwide have been diagnosed with COVID-19 and 614,001 people have died. About 8.9 million people have recovered and just over 5.3 million cases remain active. Yesterday, 205,523 new cases were reported and 4,049 people died. The seven-day moving average for new cases is 228,807. While this marks a new high in daily transmissions, the rate of increase yesterday over the day before is slightly smaller than the day before.

The number of daily deaths continues to increase, but at a very slow rate, and currently sits at an average of 5,175 per day. The countries with the worst outbreaks of recent cases, logically, are also the countries with the highest numbers of deaths. From yesterday: Brazil (718), India (596), the U.S. (545) and Mexico (296).

An encouraging note is that Europe, which saw some of the worst numbers of deaths just short time ago, now has very few deaths each day. Italy ranked the highest (#23) of the European countries for deaths in yesterday’s numbers with 13 deaths, or about what the state of Tennessee is averaging each day. Clearly, there is a way to get this disease under control.

In terms of new cases, previous patterns held, as the U.S. continues to dominate in raw numbers, while a small cluster of countries provides the majority of new cases in the world. New cases from yesterday: the U.S. (62,879), India (36,810) and Brazil (21,749). The three constitute about 60% of the new cases reported yesterday. Twenty-four countries around the world reported at least 1,000 new cases, with nine of those countries in South and Central America.

The U.N. is warning that one of the results of the pandemic and its aftermath could be famine across parts of the world. The EU has agreed to a €750 billion stimulus and relief package for member nations. Brazil will test the new Chinese vaccine. A new study shows that about 1 in 4 residents of New Delhi has had COVID-19.

Since the beginning of the pandemic in March, 3,964,361 Americans have been diagnosed with COVID-19 and 143,919 have died of the illness. Yesterday, 62,879 new cases were reported and an additional 546 people died of the illness. Recoveries are approaching 1.9 million and roughly 2 million cases remain active.

In a glimmer of good news, yesterday’s total is about 3,000 lower than one week earlier, which is the appropriate comparison, given the weekly cycles of reporting. As a result, the seven-day average of daily cases fell about 400 to 68,263. It’s a small drop, it may mean nothing in the bigger picture, but it marks the first drop in the seven-day average since June 10, so we can hope it is the beginning of our second peak.

The 546 total deaths yesterday is about 80 more than the same day the previous week. As a result, the average number of daily deaths continues to edge upward and has now risen to 802. The last time the average was over 800 was June 11. Given that deaths will lag new cases, we can hope new cases have peaked, meaning deaths would begin diminishing in two to four weeks.

A full 16 states reported new cases of 1,000 or more, yesterday. In addition to some of the states we’ve repeatedly mentioned, new states including Washington, Kansas, Pennsylvania, Illinois and Ohio each saw over 1,000 cases, yesterday, and are seeing increasing rates of infections.  The states reporting multiple thousands yesterday were Florida (10,347), California (8,814), Texas (7,925), Louisiana (3,186), and Georgia (2,452). In addition to the four southeastern states in the top five, other southeastern states ranking highly include Alabama (#6), Tennessee (#7), North Carolina (#9), South Carolina (#10), Mississippi (#11) and Virginia (#18).

In the largest anti-body test to date, the CDC is reporting that the virus has infected far more people than have been diagnosed. In some cases (like Missouri), maybe ten times as many. The good news is that about 40% of people never developed symptoms or sought out testing or medical care. The concern is that these people are believed to be a primary driver in spread, as they have no obvious symptoms, but remain contagious. The CDC made clear that no place in the U.S., including hard-hit NYC has approached herd immunity levels.

With the Senate Republicans crafting the next stimulus package, it would seem intuitive that they are on the same page with the president, but apparently that is not the case, with the president opposing inclusion of $25 billion that would go toward testing and contact tracing. The White House is also opposing additional funding directed to the CDC and Defense and State departments for addressing the outbreak around the world. After that raft of reports, Kayleigh Mcenany said his position had been mis-characterized.

The FDA has approved pooled testing, which is designed to help speed up test results. The recent report from the CDC after their visit to Knoxville recommended that we use pooled testing. Don’t know what that is? Here’s a good description. President Trump is now wearing a mask (at least at times) and encouraging their use, tweeting that wearing a mask is “patriotic.”

Yesterday afternoon, the state of Tennessee reported 1,639 new cases of COVID-19, bringing the pandemic total to 79,754 in the state. 1,655 were reported to have recovered and 4 additional Tennesseeans died of the illness. It was a rare recent day when the number of active cases dropped, falling by 20 cases to 32,933. The seven-day average of deaths remains in the low teens.

31 additional people were hospitalized across the state, bringing that current total to 1,038 confirmed and 423 pending hospitalized patients. Availability levels for medical resources: Beds (20%), ICU Beds (19%) and Ventilators (67%). The numbers are roughly the same as yesterday.

Nearly 18,000 tests were given in the state, yesterday, bringing the pandemic testing total to just over 1.2 million. The positive test rate – which has a generally accepted goal of 5% or under, is now 9.0%, which is slightly better than the 9.2% it was running recently.

Today, the Knox County Health Department reported an additional 78 cases to bring our pandemic total to 2392. 54 people were moved to the recovered category and an additional person died, shifting the number of active cases upward by 23 to 1,334. 45 Knox County residents are currently hospitalized with the illness. There are an additional 115 probable cases.

As a result of comments on this blog, I asked the following questions and got the noted responses  from the Knox County Health Department: