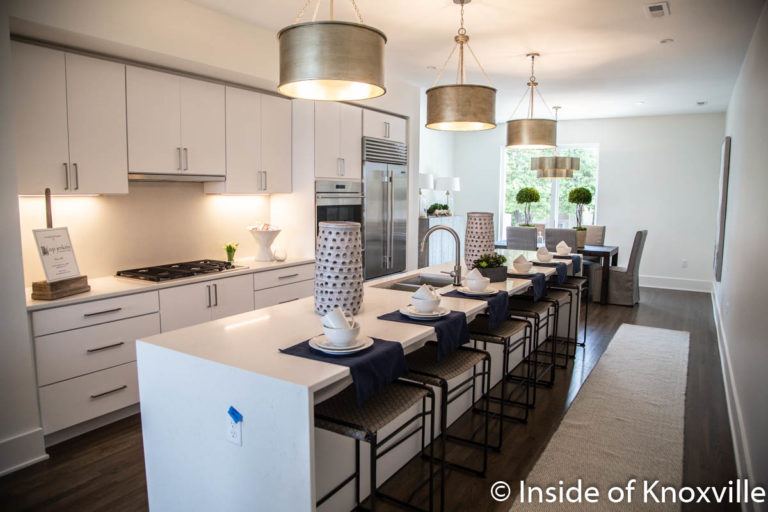 I mentioned City House Town Homes recently and said I’d not have another article on them, as they are completed, unless I worked out a chance to walk around inside. Thanks to Tim Hill and Kendall Hill, I had that chance. The development was constructed by Hatcher-Hill Properties in conjunction with Sanders Pace Architecture. I’ll let the photographs tell most of the story.

The first article I wrote on the development was five years ago this month. In between was a long period of quiet, an intense period of construction and the completion of the units this year. One unit of the seven has been purchased and occupied for months and another is now under contract.

I toured a unit that has been lightly decorated and staged, to give an idea of the potential in the homes. Each have three outdoor spaces, starting with a small outdoor patio at the basement level in the front. We started on that level and viewed the mother-in-law suite or office space with a full bath and the two car garage.

Up a floor is the main entrance and that floor features the main living space, including full dining room, kitchen, half bath and living space, which opens up onto an outdoor balcony overlooking the train yards and Sharpe’s Ridge. The balcony connects with the living space in a way that it feels like a natural progression of the living space. Interior space in the units is roughly 3,000 square feet.

Up a floor is the master bedroom, and two other bedrooms, each with great views of the valley or of the city. This floor also features a full bath in addition to the master bath. The homes each have a 500 square foot rooftop deck with the best views in each direction, one of the city and the other of Sharpe’s Ridge, with a sliver of the Old City visible to the east.

Each of the units are similar in size and each have the rare urban two-car garage, three outdoor spaces, four bedrooms and three-and-one-half baths. Sale price on the units is $1.25 million, with the exception of one which slightly larger and lists for $1.3 million. The website has more detail, including floor plans and contact information.