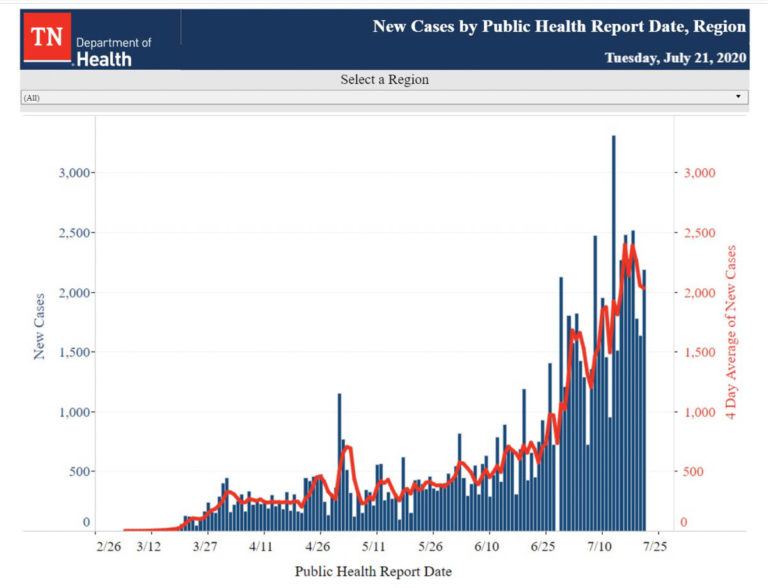 Mid-way through another week. The Board of Health meets this afternoon at 5 pm to discuss the current state of the benchmarks. The school system continues to make plans for bringing students back and today is the deadline for parents, who want to do so, to commit to virtual learning for the semester. Its a tough decision for many of them.

There are now 15,153,194 confirmed and reported cases of COVID-19 across the world since the beginning of the pandemic. 621,153 deaths have been attributed to the illness worldwide. Yesterday an additional 239,039 cases and 5,678 deaths. Approximately 9.8 million cases have been resolved and 5.4 million people remain actively ill.

The number of cases yesterday represented the third largest daily total since the beginning of the pandemic, with the two largest coming in the last week. Yesterday’s number was about 19,000 more cases than the same day last week. The average number of new daily cases is 231,507, up about 2,700 from yesterday.

Deaths continue to rise across the world, though very slowly at this time. The seven-day moving average is 5,197. This is the highest the daily death rate has been since May 8. While there were deaths from the illness reported in 89 different countries yesterday, the countries at the top continue to contribute the largest shares. The three countries with the highest numbers of deaths yesterday were Brazil (1,346), the U.S. (1,119) and India (671).

In new cases, the same pattern holds, with three countries contributing over 60% of the world’s new cases: the U.S. (67,140), Brazil (44,887) and India (39,168). Brazil and India have tested only a small percentage per capita the testing in the U.S., meaning their case numbers are likely much higher. Twenty five different countries reported at least 1,000 new cases. Nine of the countries are in Central and South America, while only one, Spain, is a European country. South Africa, Colombia, Argentina, Iraq and Israel have some of the highest rates of increase.

The U.K. is looking at combating obesity after seeing its risks highlighted during the current pandemic. Europe has developed rehab centers specifically for the treatment of residual impacts of COVID-19, where thousands of Europeans have reported continuing symptoms weeks and months after having the illness. The long-term symptoms some people experience include brain-fog, fatigue and breathlessness.

To date, the United States has reported 4,045,559 cases of COVID-19 and 145,251 deaths as a result of the illness. The most recent million cases were added in 15 days as the rate for new cases of the illness has increased significantly. Yesterday, the U.S. reported 67,140 new cases and 1,122 deaths. The case number is about 1,100 larger than the same day the week before. The daily average of new cases is currently at 68,420 and for the last three days has either paused or, optimistically, plateaued.

The 1,119 deaths reported yesterday is the highest single-day total since June 2. The seven-day average continues to slowly climb, and now sits at 829 American deaths each day from the illness. This is the highest the average has been since June 10. The U.S. leads the world in total reported deaths, with almost twice that of Brazil, the country just below ours. The U.S. has the 8th worst death rate in the world on a per capita basis among countries with 10,000,000 or more in population.

The president addressed the country on the virus yesterday, taking reportedly a more somber tone, encouraging mask usage. As a follow up, clarifying the president’s remarks, White House advisor Kellyanne Conway said, “some of these states moved through our gated criteria, moved through some of our phases, and they opened up some of the industries a little too quickly like bars . . . ”

In the absence of nation-wide mandates, many big-box stores and chains have begun instituting their own mask requirements. It puts associates in a tough spot: enforce company policy and risk angering customers. Lowes, for example, has said it will require the masks, but it will not expect associates to enforce the mandate for fear of violent confrontations with customers.

FEMA Administrator Gaynor says the U.S. could face additional PPE shortages and calls our reliance on other countries to produce PPE a “national security” issue. A new report out of Florida states that 47% of all deaths from the illness in the state have been at long-term care facilities.

Yesterday, the state of Tennessee reported 2,190 new cases, bringing the total cases to 81,994. 1,878 people were reported recovered, bringing that total to 47,852. An additional 24 deaths were reported, taking that total to 871. For the day, the number of active cases in the state increased by 288. There are now 33,221 active cases of COVID-19 in the state. The average number of daily deaths continues to be in the mid-teens.

86 additional people were hospitalized and that current total is 1,059 COVID-19-positive hospitalizations, with an additional 392 pending cases. Current available state-wide hospital capacity: Beds (19%), ICU Beds (17%) and Ventilators (67%). About 23,000 were tested yesterday, bringing that number to over 1.2 million tests. Unfortunately, the state continues to struggle with bringing the positive test numbers down and the positive test rate currently sits at 9.1%

Locally, the Knox County Health Department reported an additional 123 cases today. This is only the fourth time the daily number of new cases have crossed 100 and each of the four times have occurred in the last 8 days. The number of active cases in the county has now reached 1,392. The number of Knox County residents currently in the hospital is 38, down from a high of 45, yesterday.

Another Knox County resident has died of the illness, bringing that total to 21. The person was between the ages of 45 – 64, bringing the total in this age category to 8 deaths. There are currently 117 probable cases being monitored. The benchmarks, updated today, show red lights for cases, and deaths, yellow lights for testing and hospital capacity and green for public health capacity. Availability of medical resources in the county: Beds (23.4%), ICU Beds (15.8%) and Ventilators (56.5%). One week ago, these numbers were: Beds (21.7%), ICU Beds (8.8%) and Ventilators (55.4%), meaning these numbers have improved over the course of a week.

Charity Menefee led today’s briefing and expressed support for the families making difficult decision. She reminded about the meeting tonight and noted it is televised. An alternate testing location will start next month. Testing now will be M-W-F at the Health Department from 8 to Noon each day. She confirmed the above numbers.

She discussed the benchmarks, with a reminder that they are looking for a three-day statistically significant shift over the last two weeks. Regarding the first benchmarks related to new cases, the traffic light remains red, as cases continue to climb significantly with large day-to-day increases.

Regarding testing, the traffic light has been changed to yellow. The number of tests given has gone up and response time has improved slightly. She said their return time is much slower at the H.D., but they only do 16% of community testing. She said more labs are being sought to reduce return times.

The third benchmark of public health capacity, the light remains green, but she said it is getting more difficult to complete follow up for new cases within the 24 hour goal. The fourth benchmark, hospital capacity, remains acceptable, but is represented by a yellow light due to hospital concern regarding anticipated levels. Some days did represent significantly higher levels, but the hospitals remain confident.

The final benchmark relating to deaths is represented as red. 55% of deaths of Knox County deaths have happened in the last 14 days.