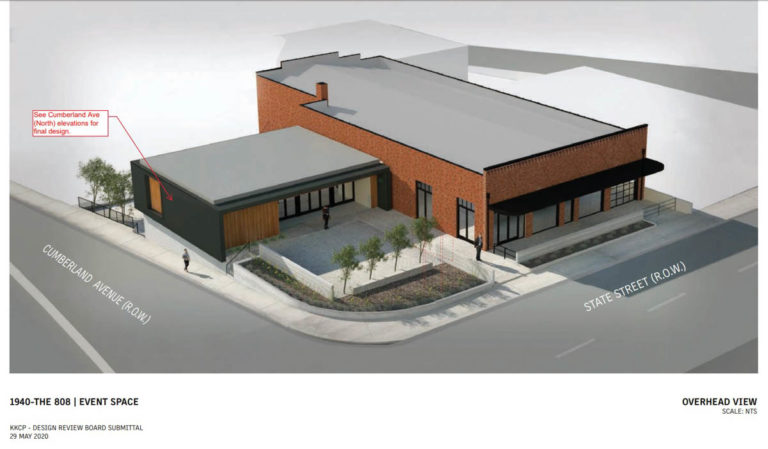 A somewhat nondescript building at 808 State Street is set to get a dramatic makeover, thanks to owners State properties and Sanders Pace Architecture. Work has already begun to transform the 1940 terracotta block building into a fully functioning event space. The one story structure, which until recently had a faux stone veneer on the facade, which was not original, will have a 1,420 square foot addition on the north or Cumberland Avenue side, with a basement level beneath it.

A landscaped courtyard will also be added on that side, as well as “a patio and loading area to the rear of the addition.”* The main entry will be at the front of the building and the veneer has already been removed to show the original 1940 facade. Just inside the front door will be the bar area.

The addition will be made of architectural metal panels with wood accents. A retaining wall of varying height will surround the courtyard and landscaping, including trees, will be added to the corner of Cumberland and State.

The area has gotten a bit of attention in recent years, from Escape Game Knoxville on Central (just behind this State Street Location), to the Theatre Knoxville Downtown location, also on Central and near this new business. Located just a block off Gay Street, it’s a fine example of an area that might be able to sustain development as we expand our idea of what constitutes downtown Knoxville beyond Market Square, Gay Street and the Old City.

The business will join a number of other event centers which have been added in recent years around downtown. Prior to the current pandemic, it appeared the number of venues could not outpace the need for spaces for weddings, rehearsal dinners, receptions and other events. Here’s hoping the event centers are once more humming in the near future and that 1940- The 808 joins them as another successful entrant into the industry.

*All quotes from the Downtown Design Review Board application and summary.