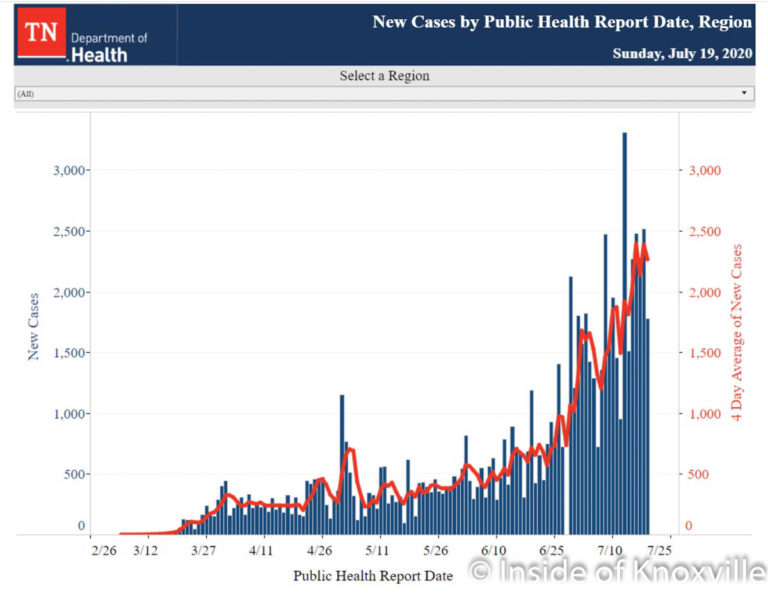 Welcome to another week. I hope you had a restful weekend and found some joy along the way. I learned that sealioning is what I’ve experienced on social media all spring. Who knew there was a name for it? Maybe everyone, but me. We also were joined in our household by Urban Girl and Urban Boy. Their mother, Urban Daughter, returned to work today with the Oak Ridge Schools. With her increased exposure, the younger ones will live with us and receive their education virtually. You many notice an impact on the amount of writing I am able to do, but we’ll see how it goes. For now, I’m just happy to hug them for the first time since March.

14,683,830 people worldwide have been diagnosed with COVID-19 since the beginning of the pandemic and 609,740 people have died of the illness. Yesterday there were 220,162 new cases reported and the seven-day average of new cases now sits at 226,758, the highest number of daily cases since the beginning of the pandemic. There are just over 5.3 million active cases around the world.

4,316 deaths from the virus were reported globally, yesterday, bringing the seven-day average to 5,112. The number has slowly risen recently after falling significantly earlier this year. The current average is higher than any date since May 12. For yesterday, the top four countries in the world for deaths were Brazil (716), India (675), Mexico (578) and the U.S. (412).

India has now surpassed Brazil in new daily cases, a shift that was inevitable, given the increasing rate of the outbreak there and the enormous India population (1.35 Billion). It will likely surpass the U.S. in daily cases very soon for the same reason, even as the U.S. cases continue to rise. Only four countries added more than 10,000 new cases yesterday: the U.S. (65,279), India (40,243), Brazil (24,650) and South Africa (13,449).

These four countries contributed 60% of the day’s new cases, while 24 different countries added at least 1,000 new cases. While a large portion (10) of the countries are in south and central America, others are scattered all over the world. There are, however, no countries in western Europe on the list, which is quite remarkable, given the situation there just a few short months ago.

Vaccines in Oxford and China are proving hopeful. The most optimistic timelines – which would shatter all previous records for speed – suggest that a widespread vaccine (or vaccines) may be widely available in mid-2021.

3,902,872 people in the United States have been diagnosed with COVID-19 since the beginning of the pandemic and 143,324 have died. Yesterday’s numbers included 65,279 new cases and 412 deaths. There are just under 2 million active cases in the U.S.

Since the last article, the U.S. set a new record for daily cases, when that total reached 74,987 new cases for this past Friday. The seven-day moving average continues to climb to new daily records and now sits at 68,680 new cases each day. That number was 67,162 when last I wrote.

Deaths also continue to slowly rise in the U.S., primarily fueled by the states that have seen the largest recent outbreaks of the illness. The 412 deaths yesterday compare to 381 the same day the week before. The average daily deaths now sits at 791 per day, whereas it was 741 a week earlier. The current level is the highest the death rate has been since June 11. Florida led the nation in deaths yesterday with 87, while Texas was second with 56. Florida’s 740 deaths last week broke its previous weekly record of 511 deaths set the week before. The state has already reported 90 additional deaths today.

A new stimulus package is under discussion and will likely be issued soon. Currently being debated are the targets and the size of the assistance. A record six million Americans signed up for food stamps in the first three months of the pandemic.

Since the beginning of the pandemic, 78,115 Tennesseans have been diagnosed with COVID-19 and 843 have died. Yesterday, the state reported 1,779 and 5 deaths from the illness were reported. 613 cases were moved to the recovered category, for a net increase of close to 1,200 active cases. Active cases in Tennessee now total 32,953.

32 additional people were hospitalized with the illness yesterday and nearly 24,000 were tested, bringing the total tests in the state to about 1.2 million. The positive rate has dropped slightly to 9%. Hospitalizations have plateaued for the last few days and currently sit at 971 confirmed and 397 pending. Current hospital availability across the state: Beds (22%), ICU Beds (19%) and Ventilators (67%).

Hispanic cases in the county, once representing over 25% of all cases, now represents about 20%. Though still over-represented, new infections have now shifted numerically to non-Hispanic populations. The case load has increased most among those in their 20s, with that cohort now representing almost 31% of cases. Over 17% have been below age 20. There are now 113 probable cases.

Dr. Buchanan began by thanking the families of staff members who have made it possible for them to work long hours for months.

She said the department continues to work out details for alternative testing sites in order to allow people not to wait in the heat. She said typically, they are testing at least five days a week, with targeted testing on the weekends. She noted the testing team is limited in numbers and hours, just as supply and capacity is limited.

She noted people may be tested elsewhere. She pointed out that testing doesn’t keep you from getting the virus, but masks and distancing will. She reminded people that if you get tested, you should quarantine until you get negative results. Please stay home. She thanked those who are doing so.