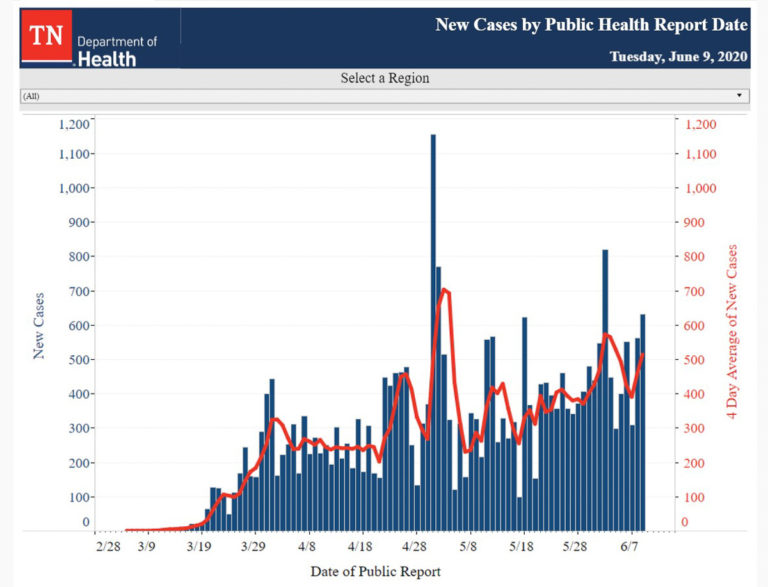 Heat is a thing, right now. Despite being a bit early on the calendar, it is clearly summer outside in Knoxville. Cries for change in our justice and other systems have heated up across our country. The virus has heated up in places it had previously only gently touched. That’s a lot of heat. Let’s remember to shed light with the heat. This could be a summer where our country flies apart or comes together. It’s up to us.

As of mid-day today, there are 7,363,503 confirmed and reported cases of COVID-19 and 414,588  confirmed and acknowledged deaths across the world. Yesterday saw increases of 121,071 cases worldwide and 4,732 deaths. The number of daily diagnosed cases continues to rise, with fourteen consecutive days above 100,000. Prior to that fourteen days, there had only been four total days that crossed that number.

Deaths, which trailed off dramatically from mid-April to mid-May, have since leveled off and increased slightly. Monday’s number fell into the 3,000s, but Tuesday’s number increased substantially. This is consistent with weekly patterns in reporting, but yesterday’s total of 4,732 was slightly larger than the analogous day the previous week, which came in at 4,671.

COVID-19 rates in Brazil continue to escalate at rates which are nothing short of stunning. New cases reported in Brazil yesterday totaled 31,197, far outstripping any other country for the day (the U.S. was second with 19,056). This for a country which has tested at a rate of about 8% that of the U.S. The total number of cases must necessarily be much, much higher.

Brazil also topped the world with 1,185 acknowledged. The U.S. was second with 1,093. To give some context to these numbers, the next country down (Mexico) reported 354 deaths. Deaths in the U.S., Brazil and Mexico represented about half the deaths in the world for the day. That, however, assumes countries are accurately reporting deaths, which is likely not true. It has also been contended that Brazil is understating deaths.

Eighteen different countries reported at least 1,000 new cases yesterday. Pakistan, Bagladesh, South Africa, Colombia and Egypt have some of the worst rates of increases for yesterday.

One hundred twenty five vaccines are being explored with scientists hopeful for a successful vaccine or vaccines by next year. Meanwhile, the current world-wide economic downturn in the wake of the virus is being called the “biggest peacetime downturn in a century,” by the Organisation for Economic Cooperation and Development.

As of mid-day, there are 2,052,992 cases of COVID-19 reported since the beginning of the pandemic and 114,404 deaths. Reports from yesterday indicated 19,056 new cases and 1,093 additional deaths. Three consecutive days of fewer than 20,000 new cases marks only the second time that has been achieved since March. After four consecutive days of fewer than 1,000 deaths, deaths increased almost 100% yesterday from Monday’s low.

Twenty one states are reporting increases in the rate of new cases. Some such as Alaska will not show at the top of the numbers charts because their population is so low, but they are seeing the worst rate of increase since the beginning of the pandemic. Dr. Fauci has expressed concerns that the demonstrations could spread the virus. Cases have already been reported among the National Guard troops deployed to Washington, D.C. and among National Guardsmen in Nebraska. National Guardsmen from the Knoxville area were sent to D.C.

There were three states reporting 1,000 or more new cases yesterday. In order, they were California (3,045), Texas (1,748) and Florida (1,096). If warm weather were going to help, these are places that would seem to be due a decrease at this point. Part of the surge in California is in U.S. citizens and green card holders who live south of the border, are become infected and coming north for treatment because the hospitals in Mexico are overwhelmed. Much of the increase, however is traced to gatherings.

The same is happening in Arizona, where intensive care units are filling up and hospitals have been asked to take emergency measures. In addition to Texas and Florida, other southern states reporting high rates additional cases include Georgia (6th), North Carolina (7th), Tennessee (8th), Louisiana (10th), Alabama (13th), Virginia (14th), South Carolina (15th), Mississippi (17th) and Arkansas (18th). In all, a majority of the top ten and top twenty increases yesterday were among southern states.

Jacksonville, Florida is increasingly seen as the likely spot for some portion of the Republican convention. Some of the logistical work will still be done in Charlotte, and it is unclear if a Jacksonville convention would have three full days of events as originally planned or a packed arena with no distancing and facemasks as President Trump had insisted of North Carolina’s Mayor. Both states are experiencing surges in numbers of new cases of COVID-19.

The state of Tennessee reported 631 new cases of COVID-19 yesterday, along with 14 deaths and 26 new hospitalizations. 450 people were reported to have recovered, netting about 180 new active cases. Active cases in Tennessee now total about 9,600. Cases from the beginning of the pandemic total 27,575 and 435 total Tennesseans have died.

The state reports 8,434 tests were administered yesterday for a total of 521,197. The rate of positive tests remained at 5.4%. The number of tests administered each day continues to vary widely, as yesterday represented a drop of about 5,500 from the day before. This week’s average is running about 600 more tests per day than last week.

Locally, I should first mention that I reported yesterday’s increase as seven in the county when, in fact, it was nine. I have corrected the error in yesterday’s article.

Today’s report from the Knox County Health Department indicates 16 new cases, bringing the total to 519. Last week Knox County experienced the highest number of increased cases since the beginning of the pandemic and this week’s increased cases is running ahead of those numbers. The number of active cases has increased to 114 Knox County residents and 6 people are currently hospitalized. No new deaths have been reported. There are ten additional, probable cases.

Dr. Buchanan chaired today’s meeting. She thanked Dr. Gray of UT hospital who is the representative for local hospitals and he joined her today. She confirmed the above numbers.

Dr. Gray characterized his remarks as a monthly update. He said the hospitals continue to work together. He started with state-wide data, noting that the positive rate is 5.6% (slightly differs). He said hospitalizations are up, but manageable. For the region, he said we have a disproportionate share of the state total increase in cases.

COVID-19 hospitalizations are manageable at 6 and the peak was 13. He emphasized that hospitals are safe to seek treatment for other issues and said some evidence is showing delayed care has hurt those with chronic illness. Visitation continues to be restricted, but one person is allowed to stay overnight with patients.

Our testing pipeline is improving. They are testing those who enter the hospital for all reasons and the percentage of positive is very low. They are still not emphasizing tests for immunity. COVID-19 patients are kept in specific areas in the hospitals. Our surge capacity remains adequate and PPE is adequate. The hospitals are returning to pre-COVID levels of care.