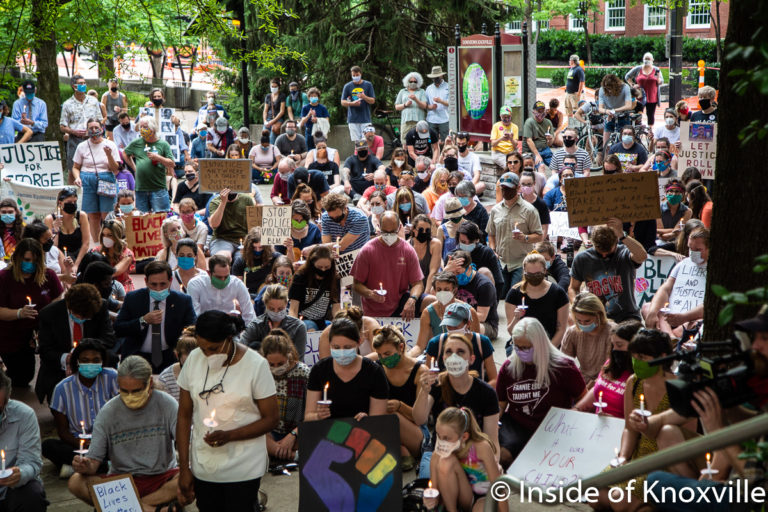 Monday evening this week, the Public Defender’s Office of Knox County, along with others across the state and country, held a candlelight vigil “in solidarity to honor those who have been killed at the hands of law enforcement and to bring attention to the racial inequalities in the criminal justice system.”

The event, held just outside the entrance to the City-County Building was attended by about three hundred people, including Mayor Kincannon. Those in attendance were urged to bring signs and to wear masks. Many brought signs, a large number brought flowers, and almost everyone wore a mask to the outdoor event.

With the mayor in attendance and at least one County Commissioner, Evelyn Gill, you might expect them to speak, but they did not. Mayor Kincannon slipped back into the crowd and the event was led by members of the Public Defenders office, alone.

Three young members of the D.A.’s office spoke about the work they do and the inequities they witness in the system. Each spoke briefly, and the final speaker detailed what would likely have happened if George Floyd had not died.

He said, after two weeks to two months, he would have come before a judge. His lawyers would argue charges should be dismissed, stating that he did not resist arrest and was unaware  the $20 bill he passed was a forgery (if it was). The judge would almost certainly accepted the word of the police officers and he would have been ordered to stand trial.

Additional weeks would pass while lawyers gathered evidence, constructed arguments and selected jurors. The jury selection would result in a jury that did not resemble George Floyd’s community. As the trial progressed, the jury might react negatively to the fact that the policeman held George down by placing his knee on George’s neck, but they would be assured this is acceptable in the police manual. The police said he resisted and the knee on his neck is accepted practice, so he would be found guilty and delivered to prison.

An appeal would be denied by three judges who would support the initial judge. Going forward, any ruling made by the judge would set precedent, ensuring that whether or not injury or death resulted in subsequent cases of police putting their knees to the necks of others, they would be held without harm.

The point of the gathering was to highlight a system that many feel is broken, while others say is doing precisely what it was designed to do. The original police forces in the south were slave patrols. They were set up to make sure no slaves escaped and to capture them if they did.

After slaves were freed, many local policing groups enforced Jim Crowe laws as a natural evolution. Around the country many police forces were arms of local business or industry and were designed to protect the interests of the powerful, which often included union busting.

After the brief speeches, candles were handed out and the crowd was told to kneel, sit or stand, but to light their candle and maintain silence for 8 minutes and 46 seconds; the length of time the policeman held his knee to George Floyd’s neck. It’s a long time.