Spring Photos in the Time of Corona 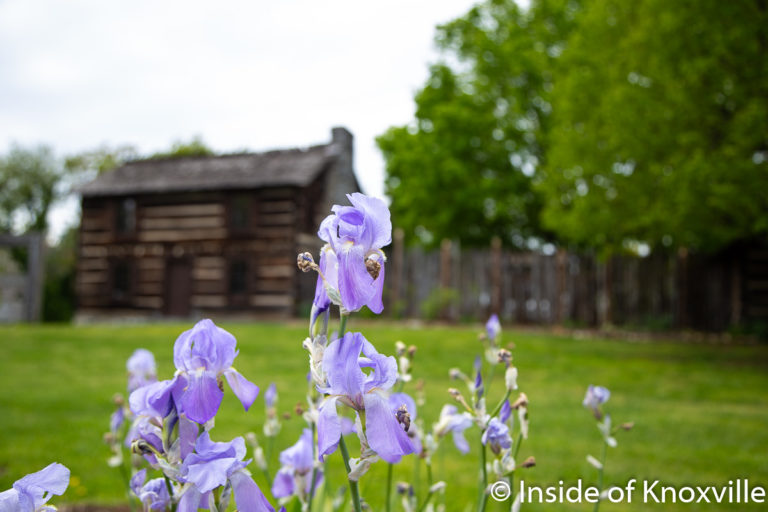 Here’s another shot of photographs from this beautiful spring. While the damage to families and the economy can’t be understated, I hope many of us will take some good from this time. For me, one of those benefits is being forced to slow down enough to literally smell the flowers. And photograph them.

I think these photos bring me up through April. I’ve enjoyed so many good walks. This group of photos starts on the east side of the river. I consider it a little stunning that we still have the original cabin that was built in what would become Knoxville. Admittedly, it was taken apart for many years and now sits a little distance from its original location, which was right around the State Street Garage, but it’s still pretty amazing.

The flowers lining the Hill Street Viaduct were beautiful. I’d hoped to get a shot through them to the river or the hills on the other side, but that didn’t work out so well. We really do have some unusual structures around this city, including the Women’s Basketball Hall of Fame. It’s Urban Boy’s second favorite structure. We had plans to take him inside before . . .

The next group of pictures shift parts of downtown. I’ve tried to take multiple photographs of Market Square. Because it is the heart of the city, its current emptiness encapsulates the story of this strange era. I’m hoping that very soon, photographs of an empty Market Square will once more be impossible to shoot.

The view of Regas Square from the top of the hill on Vine Avenue shows it in its best light. I’ve liked the building from the first time I saw the design and I’m still a big fan. Most recently walking by, I’ve noticed that the unsold units are now available for lease or purchase. The empty storefronts were already going to be a challenge. With the the current downturn in the economy, filling them may take a while. Hopefully, we spring back more quickly than not and a good anchor comes in to get the spaces started.

The next photos take us from the sublime to the surreal and capture a lot of what I love about this city and others. I’m a big fan of statues and I love ours. I’m not Catholic, but Mother Mary is always a soothing stop on my walks. Maybe I fell in love with her when I first heard the Beatles sing, “Let It Be.” It’s one of the first songs on pop radio that I loved.

And unicorns, this one pictured in the Old City, are just about perfect. They’ll always, of course, have a strong resonance for me, as long term readers know. I love whimsical surprises in the city, the kinds of things you’d never see in a suburb. As I read on Facebook the other day, “Always Be Yourself. Unless You Can Be a Unicorn. Then, Always Be a Unicorn.” True words.

I’ve taken a number of walks by the river. Sometimes a thing I’ve seen or even photographed before just grabs me afresh. I love the Henley Bridge in all its re-built glory. Sure, there are more beautiful bridges in other cities, but I like ours. I never seem to photograph it in a way that captures just how beautiful it looks to me. Now, walking across it with that traffic? Not so great.

The building in the photo above is in Maplehurst, a little jewel tucked away between the River, Neyland Stadium and Henley Street. That building is one of my favorites around downtown. I’ve take several walks through the small neighborhood in the last couple of months and always enjoy it.

I also often wind up visiting with Sergei. I haven’t started talking to him, yet, but that may come soon as our relationship deepens. Most recently, I was surprised to find a man sitting on one of the benches staring at the statue. I told him I often come there and he confessed he had no idea who the statue represented. The name meant nothing to him. I explained the strange twist of events that led Knoxville to have a statue of a Russian Pianist.

The cute fellow above was holding court at the corner of Locust and Union, barking at everything that moved. Clearly, his people have agreed he should have his own little perch in the window as befits a judge holding court on the street. He finally turned and posed for a photograph before giving me a piece of his mind for presuming to pause as I passed by.

Signs of closures have been one of the threads that have run through the last two months. We’re starting to see them come down. Earth to Old City, pictured above, is now open for business. The final two photographs are back over at the World’s Fair Park which has mostly been abandoned for the duration. I’ve enjoyed having the spaces to myself on my walks, but I’ve missed the people that give the places purpose. They are starting to fill back up. Here’s hoping its safe to keep them that way.