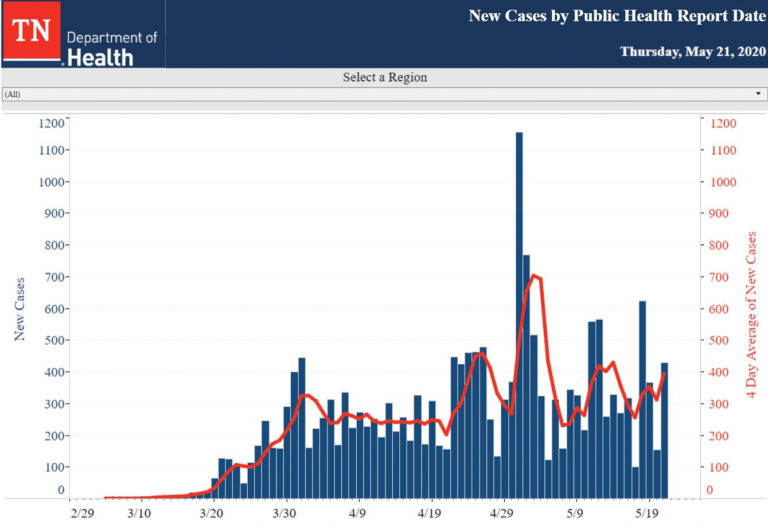 As we head into the first major holiday weekend (second counting Mother’s Day) since the beginning of the pandemic, that marker, like all the others so far, seems strangely hollow. Taking Monday off work isn’t so novel for many of us at this point. Still, its important that we celebrate occasions as much as is safely possible. I hope you can catch a little sunshine, make the weekend as special as possible, and stay safe while doing so. The virus is still out there and it doesn’t recognize holidays.

As of this writing, there are 5,234,327 confirmed cases of COVID-19 worldwide. 335,734 deaths have been attributed to the disease. Yesterday’s increase of 107,085 was the largest single-day increase in confirmed cases since the beginning of the pandemic. If patterns hold, today will be larger, as Fridays have been the largest numerical day for the week for numerous previous weeks. While the larger numbers must, to some extent, reflect increased testing (though I can’t find a graph or chart that documents this), it means the virus is still very much circulating around the world.

There were 4,934 additional worldwide deaths reported yesterday. While this number reflects a third consecutive day of increases, the week-over-week trend is still downward for deaths. The numbers are muddled by inaccurate counts coming from some of the hottest spots for the virus in the world: Brazil, Mexico, Russia and India. Brazil and India have barely scratched the surface with testing and Brazil, Mexico and Russia are each widely believed to be hiding death numbers.

There are a number of variables which complicate forming and executing a coherent response to the pandemic. I’ve previously mentioned the cyclone which displaced between two and three million people. Holidays are an issue. Religious observance has been a flash point here and across the world. In predominantly Muslim countries, this weekend usually marks the celebratory feasts of Eid al-Fitr, denoting the end of Ramadan.

Built around gathering, numerous countries are struggling to keep the celebrations at home. Indonesia, which is seeing its highest daily totals of new cases, has banned anyone returning home for the celebration. The article also looks at other countries and how they are handling the situation. For many in these countries, there is no choice but not to celebrate: because of the shutdowns, they have no money for food.

Checking in on Sweden which has, ironically, been championed by the right in this country as an example of a path forward as they have only slightly imposed restrictions on individuals and businesses. Increasing voices are countering that narrative saying it hasn’t gone well for the country.

One theory regarding their approach and its purported superiority is that it would produce much greater herd immunity, that is more people having been exposed, the country would become less susceptible to the disease, because people would develop immunity. Herd immunity requires a population to achieve around an 80% infection rate. The theory seems not to have worked, with a recent study by the government showing only 7.3% of the people in Stockholm test positive for anti-bodies.

The other measure of success, cases and deaths relative to the world and their neighbors shows Sweden not comparing well. Sweden currently has the sixth worst death rate in the world (eliminating tiny countries) and the fourteenth worst case rate per capita. Their death rate of 389 deaths per million compares very poorly to their immediate neighbors all of which imposed serious shutdowns: Denmark (97), Finland (55) and Norway (43).

There are, to date, 1,625,838 confirmed cases of COVID-19 in the United States. Yesterday the U.S. reported a surge in newly confirmed cases, with 28,179 cases for the day. It’s the highest single-day number since May 8. While numbers of new cases have generally trended down during the month of May, the decline has been extremely slow. Testing is increasing, so we are likely catching cases were were missing before. The U.S. is now administering a million tests every two-to-three days and has now administered over 13,000,000 tests.

There were 1,418 additional deaths in the U.S. yesterday, bringing the total dead in the U.S. to 96,354. As the chart above shows, the daily death toll has decreased since about mid-April and generally remains between one and two thousand per day.

Alabama got some attention for its increasing numbers. Montgomery’s mayor reports one ICU bed available in the city and says patients are being sent to Birmingham. In other national news, and related to the issues presented by religious observance, a group of 1,200 California pastors sent a letter to Governor Gavin Newsom stating that they will hold in-person services beginning this weekend, despite a state order restricting it. The 1200 ministers claim to represent about 3,000 congregations across the state.

As of yesterday afternoon (the latest numbers available at this writing), the state of Tennessee reports 18,961 cumulative cases of COVID-19 and 313 cumulative deaths. Yesterday’s new case total increased by 429 and 4 deaths were reported, along with 24 additional hospitalizations. 6,570 tests were given yesterday.

Numbers of positive tests have been erratic day-to-day, but yesterday is another in a group of recent days on a higher end of our range. The red line on the chart, the four-day moving average, helps even out the data to show broader trends. The line has remained in a pretty steady range but, if anything, it shows a fairly steep increase since May 8 when we bottom out after several previous days of sharp increases were removed from the moving average.

Locally, the Knox County Health Department is reporting a cumulative total of 327 cases in the county, an increase of four over yesterday. This continues the very slow, steady increase we’ve seen for a number of weeks, with most days resulting in single-digit increases. There have been no new deaths in addition to the previously reported 5 and there continue to be two Knox County residents hospitalized and six probable cases.

Dr. Buchanan led today’s press conference and was joined by Charity Menefee. She started by thanking the businesses and citizens who filled out surveys regarding reopening. She said some feedback was encouraging. The majority in the community reported they were following guidance, but 25% made it clear they are not wearing masks or avoiding large gatherings.

The majority want to see fewer restrictions on what is open, but want to see the community observing the guidelines. Businesses reported concerns about employee safety, customers not following employee directions, not having enough equipment like masks and not being clear which category covered their business.

The survey also asked for ideas from businesses. They requested larger capacities for inside patrons, allowing more businesses to be open and more public education.

The phase 2 recommendations are currently housed on the website here (released this morning). Clicking the Phase 2 document yields the details on a PDF. 311 will continue to take questions on the reopening. She expressed gratitude to them. She stressed that the businesses in phase two are allowed to open, but not required to do so and should make decisions that they feel are safe for the public and their employees.

Charity Menefee confirmed the above numbers. She reviewed the benchmarks emphasizing that they are focused on a fourteen-day moving average. New case growth, increased testing, test result turn-around time, public health capability, health care capabilities, sustained stability or decline in deaths. All continue to look good for our county. While there is a decline in available hospital beds, the beds are being used for purposes other than COVID-19.