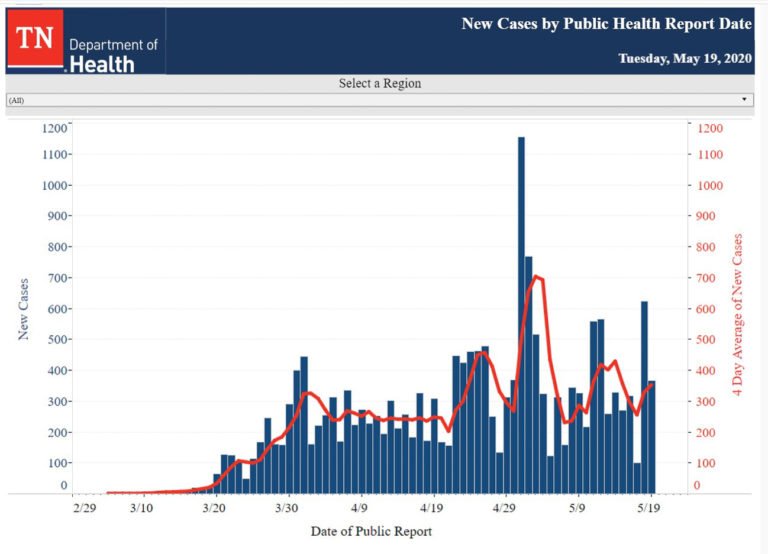 I hope you are all doing well today and are grabbing the random glimmers of sunshine to get out a bit and get some vitamin D. As the weirdness continues to drag on, it’s important to get some exercise, find some pleasure and maybe get something done. At least these are the things I tell myself daily. Let’s take a look at what is happening.

There were 94,813 additional confirmed cases yesterday, the ninth highest daily total since the pandemic began, though the numbers are, no doubt, skewed because of the massive increase in worldwide testing. Total worldwide deaths from the disease now sit at 325,712. Yesterday saw an additional 4,589 attributed to the disease. As is clear on the graph charting daily deaths, the number of reported deaths continues to slowly, but steadily, decline.

Nations around the world continue to re-open their economies, though the pace and continued restrictions vary widely depending on a number of political and health variables. Natural disasters are emerging as a potential threat to the gains made thus far. A cyclone which made landfall in India yesterday drove 3,000,000 people in India and Bangladesh into shelters, raising the specter of a setback because of the crowding.

While large numbers are opening up, others continue to struggle, with varying degrees of coherent responses to the upticks in cases and deaths. A number of African countries have seen increases, for example, but elections being held today in Burundi have featured large stadium rallies, leading to fears of fueling the outbreak. In the U.S., the first named Atlantic storm marked the sixth consecutive year of a named storm prior to hurricane and served as a reminder that our coastal situations could rapidly become more complicated if we had to fight both a hurricane and the pandemic.

Sixteen countries saw increases of over 1,000 cases yesterday, with the U.S. leading the way with over 20,000 new cases. Russia has broken a chain of 10,000 daily case increases, reporting 9,263 yesterday, while Brazil has leapfrogged Russia to have the second highest daily totals, with 17,983 new cases reported yesterday. India, Peru, Saudi Arabia, Chile and Mexico continue to struggle.

There are currently 1,574,838 confirmed cases of COVID-19 in the United States and 93,791 total deaths. Yesterdays national increases totaled 20,289 cases and 1,552 additional deaths. The number of new cases are less than yesterday and less than a week earlier, which is encouraging, though the numbers remain stubbornly high.

The daily deaths have more clearly trended downward, though yesterday saw a sharp increase from the previous day. As with cases, the decreases in deaths, while clear have been excruciatingly slow, with only two days of fewer than one thousand deaths in the U.S. since March 30.

As the country continues to reopen businesses, and the magnitude of doing so becomes increasingly obvious, pessimism is the order of the day for many Americans, with a new survey pointing finding that 60% of Americans expect difficult economic times to last for the next five years.

Economic news hasn’t been bad for every company, however as Walmart, Target, Home Depot and others report increased sales over the same period from last year. Others, such as J.C. Penny are in bankruptcy, with the pandemic exacerbating already present trends. Amazon is reportedly looking to purchase J.C. Penny. The stock market has generally rallied after its low in late March.

The state of Tennessee is a hard state to read. On one hand, this past Sunday, we had our lowest number of confirmed cases for a single day since March 24, which sounds very encouraging. The next day we had our third worst day since the beginning of the pandemic. Our six worst days have come this month.

Yesterday’s case count was 367 and that’s about where our current four-day running average sits. There were four deaths and eleven hospitalizations yesterday. 1,083 people were reclassified as “recovered,” making for a daily reduction in active cases. There were 8,695 tests administered yesterday.

Locally, the situation seems to continue as it has for nearly two months, with little change other than a very low-rate of increase. There were six new cases reported yesterday and two new hospitalizations. With 322 diagnoses since the beginning of the pandemic and 35 active cases, evidence is suggesting the Health Department will support the county mayor’s urging to join the state’s reopening plan, which is more aggressive than the one initially planned for Knox County.

Dr. Buchanan began by expressing gratitude to the individuals and business that have advised the health department’s as they develop plans to re-open. She said more than 500 businesses and 5,000 individuals completed the surveys that gave them information on local perspectives about our situation. She said that even though there are disagreements, each perspective is important.

She addressed the plans for phase two, saying phase two continues to focus on continuing the physical distancing, face covering, cleaning surfaces, washing hands and staying home if sick. She said those with higher risk factors should remain home and those living with them should be aware they can bring the virus home if they return to work and other situations where distancing isn’t possible or consistent.

Continuing to describe phase two, she said gatherings should be limited to no more than 50 people. The increase from phase one does not preclude physical distancing. Telework continues to be encouraged where practical. Additionally, best practice would be for businesses to work their way into the changes in order to better put in place successful protocols for their environment.

Businesses should limit the use of common areas, consider accommodations for high risk workers, make appointments, if possible, to limit gathering of customers. This means collecting and retaining the name and number of at least one member of each patron group and the employees who have contact with them in order to allow for contact tracing should someone test positive and their contacts need to be reached by the health department.

Under phase two, most industries may operate as long as they maintain proper precautionary measures. More industry specific detail will be provided Friday. Phase two builds on phase one. Bars, food truck parks, indoor leisure facilities, child care and summer camps may open, with the exception of over night camps. Pools and other outdoor recreation facilities may open, with the exception of playgrounds may open. Community centers and libraries may open, but senior centers will remain closed. Indoor and outdoor entertainment venues may operate with a maximum of 50 guests.

Regarding the timeline, she said phase two begins on May 26, three days ahead of schedule. She said the data supports it and the community is prepared to move ahead. June 12 the phase will be re-evaluated, with the potential for further loosening, abandoning the previously stated 28 day minimum for each phase. She emphasized that we should not act as if the pandemic is over, as it is not. As we open up further, it will be critical that guidelines are followed.