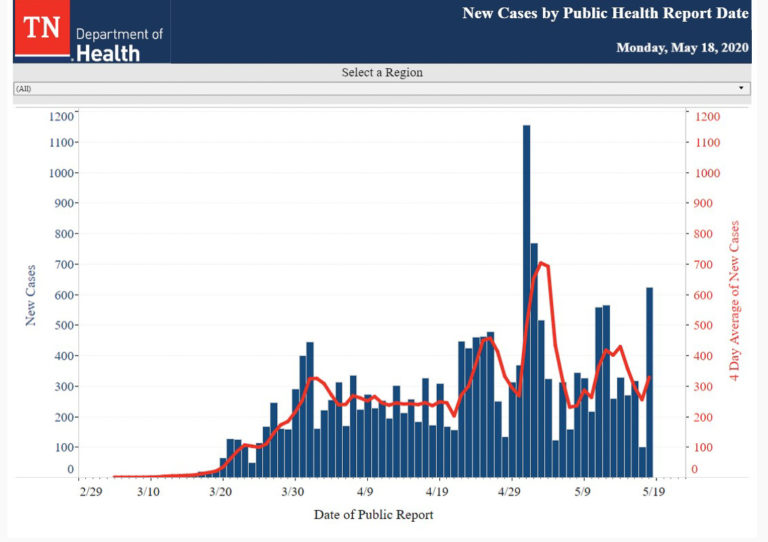 I hope you had a chance to read this morning’s article about people providing help to those in need. We will really have to work together to help each other and our local businesses if we want to have our city return to its previous strength when all the pandemic passes. It’s going to be hard for many people and a number of businesses to hang on. Help where you can. Ask for help if you need it.

There are now 4,926,566 confirmed cases of COVID-19 in the world. 320,947 people have died across the globe The rate of new cases does not seem to be slowing, as the pandemic moves from one part of the globe to the next. There were 88,858 new cases confirmed yesterday. No doubt part of the increase at this point is due to increased testing in many countries. Still, the chart at the top of this article shows that we have a seven-day cycle of ups and downs, but all within a pretty narrow range for the last seven weeks.

Deaths tell another story and the divergence of the two trends is interesting. Yesterday, 3,445 deaths were reported across the world. As the chart below clearly shows, there is a world-wide decline in the number of deaths reported each day. The trend started in mid-April and has been consistent since. We know death rates trail infection rates by a couple of weeks, but with the infection rates being even for seven weeks, it would seem deaths should be in a similar plateau.

Have we gotten better at treating? Are we hiding deaths? Probably both, but also it seems likely that we are finding more people with the disease and the relative mortality rate is now more accurately coming into focus. In other words, we are finding cases we weren’t finding before, so a more accurate ratio of cases to deaths is now coming into focus. Yet, a true reduction in raw numbers indicates this is not all that is happening. This is an encouraging note.

The New York Times has an interesting look at how France made decisions over the last twenty years that negatively impacted its ability to fight the pandemic, one of the variables in determining its outcomes (at least so far) would be worse than its neighbor, Germany. Companies were put in charge of maintaining the country’s stock of PPE. They didn’t do it well and they outsourced production to other countries. This yielded cheaper prices, but hobbled the country’s ability to produce its own PPE. It’s a cautionary tale to all countries dependent on other countries for necessary medical supplies.

Yesterday, the number of countries across the world reporting 1,000 or more new cases dropped to 15. It had been 18 in recent days. The list is top-heavy with the U.S., Russia and Brazil contributing more than half of the new cases on that day. Of continued concern is the fact that some of the hardest hit countries at the moment, India, Pakistan, Mexico and Bangladesh, for example, have abysmal testing rates. We don’t know the real numbers in those countries and likely never will.

For shear numbers, the U.S. continues, not only to have the most cases and deaths in the world, but it continues to build on that lead every day, with daily cases and deaths leading the world. As of mid-day, there are 1,555,611 confirmed cases in the U.S. Over 1.1 million cases are still active. 92,259 of those people have died. There are over 1.1 million active cases identified in the U.S. The U.S. ranks sixth in per capita cases among modestly populated countries, ninth in per capita deaths, and twenty-seventh in per capita testing.

The numbers yesterday revealed single day increases of 22,630 cases and 1,003 deaths. The number of new daily cases has been in a slow decline since late April and, as discussed above in relation to international numbers, the deaths have trailed off faster than new cases. This is encouraging and supports the notion that the leaked numbers from the White House that showed 3,000 deaths a day by the end of this month were premature, as the author said.

Noting that the numbers of cases are cyclical, for whatever various reasons, with early week numbers being the lowest, it is still encouraging that only six states reported more than 1,000 new cases yesterday. Those states include, in order of most cases, Illinois, New Jersey, California, New York, Massachusetts and Texas. Several others were close.

All states have eased restrictions at least to some degree, with many states easing most restrictions. As people become more mobile and begin gathering in larger groups for holidays like the upcoming Memorial Day weekend, we will soon learn if we have been able to simultaneously re-open the economy and control the new numbers.

Making national ripples yesterday was President Trump’s announcement that he has been taking hydroxychloroquine as a prophylactic measure against getting the virus, even though there is no evidence to support doing so. While the president insisted he is fine, the drug carries risk for heart issues for those who are obese. The announcement was generally greeted with shock and sparked new concern that a run on the drug for an unproven use will reduce its availability for those who need it for approved treatments.

Yesterday, the state of Tennessee reported a single-day increase of 623 new cases of COVID-19. This represents the third single largest day increase since the beginning of the pandemic. An anomaly? A result of our increasing contact with each other? An acceptable level to get our economy moving? We’ll see on the first two questions and the answer to the final question depends on perspective. We were told there would be an increase as we open up for business and work.

The increase brings the total number of confirmed cases in Tennessee to 18,011. Just over 8,000 of those cases are still active. With 623 new cases yesterday and 234 people pronounced recovered on the same day, the number of active cases grew by about 400.

The testing program in the state drew a positive review from NPR which credited the state for announcing early that it would pick up the tab for all tests, resulting in more people willing to be tested. Tennessee currently ranks 11th in both raw numbers of tests given and per capita testing among the fifty states and Washington, D.C.

Locally, the Knox County Health Department is reporting an increase of five cases from yesterday, to a total of 316. The number of known active cases has dropped to 47 and there are no current hospitalizations, nor new deaths to report. While things could change, the increased area activity does not seem to have impacted Knox County to this point. It’s very encouraging.

Dr. Buchanan began by thanking environmental and facility teams for their work to keep everyone safe. She reminded the public that testing is still available. She confirmed the above numbers and noted that there are four probable cases. She pleaded for compassion, noting that the pandemic has impacted all of us. “We must never forget who we are as a community.” Noting that some are getting impatient, she said the virus is not gone, the risk is real.