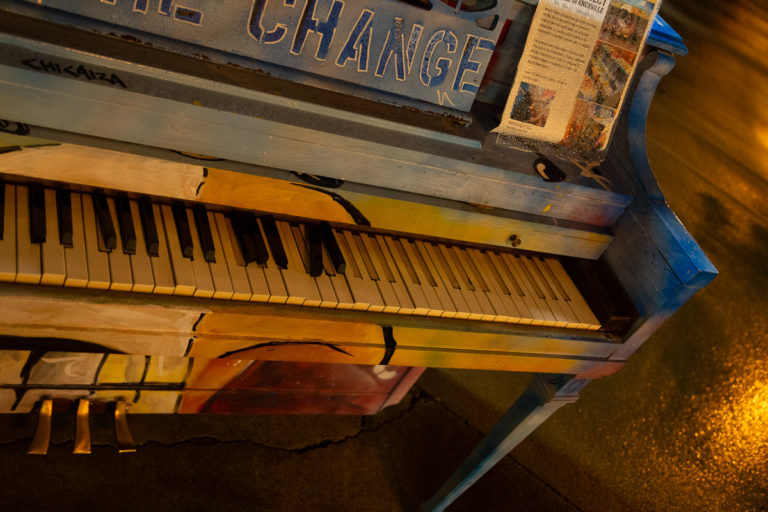 It was such an optimistic idea: Artists would make their art on instruments that passersby could use to make more art. Conversations would start over music, people would be moved. More art on the street would elevate us all.

And that has happened. The pianos have been beautiful and they have been played. I’ve heard some struggling artists, shall we say? But I’ve also been stopped in my tracks by great classical pieces and one excellent rendition of “New York State of Mind,” just when I needed it. Last night when I took these pictures, one of the pianos was in use.

So what went wrong? Well for starters, I’m not sure where the piano buddies were when the rain started, but the pianos were exposed to the elements. It seems even the ones on the Square, which have a cover high overhead, should be covered during rainfall. The one in Krutch Park was simply being poured on. What happened to the covers?

Beyond that, the news is worse. The piano in Krutch Park was apparently deliberately damaged. Someone knocked most of the black keys loose, making the piano unplayable. By the time I saw it, some were missing and some were simply laying loose atop the keyboard. It is ruined. And if it wasn’t destroyed by the vandalism, there is no doubt the rain furthered the damage.

There is a wide range of behavior in a city. A wide range of people come together in one spot, and the resulting behavior is equally wide-ranging. Some people do great things, most of us just muddle along, and some of us do bad things. Generally, the bad things are understandable within context: a drug addict will exhibit bad behaviors, for example, but logical behaviors if you live in that world.

This behavior is harder for me. I suppose it takes a damaged individual to destroy something offered freely and intended to simply share joy on the street. That someone would want to do something so destructive is hard for me to understand. Sure, there are worse things that can be done, but it’s hard to imagine anything more senseless.

I hope the piano in Krutch Park is restored or replaced, although the artist only got twelve days for his work to be shown, which is unfortunate. I also hope the remaining pianos will be covered when appropriate and respected as they deserve. Everybody needs a little joy, and these instruments can spread it if we take care of them. We can have nice things, can’t we? Can’t we?

Editor’s Note: Brian Clay, head of the project says he feels humidity is the culprit: Not vandals. More Later