Piano Project of Knoxville Brings Music to the Downtown Streets 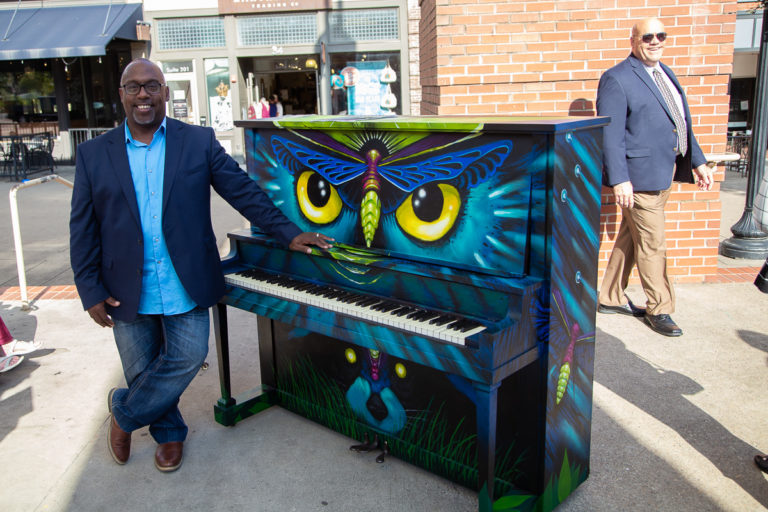 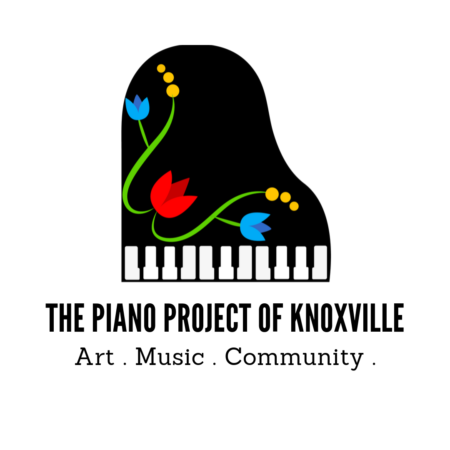 The next time you visit downtown, you may notice a little extra art or an unexpected shot of music as you walk around. A new initiative was introduced yesterday afternoon that features three pianos, each painted by East Tennessee artists and each available for any passing pianist to display his or her skills. Plans suggest it will be a long-term entry into downtown’s ecosystem.

The initiative is being spearheaded locally by jazz pianist and vocalist Brian Clay, perhaps best known for Jazzspirations, his radio show on WJBE, 99.7 FM. He has performed and toured with numerous jazz greats and with the Knoxville Jazz Orchestra. He has also worked as a broadcaster and studio musician and he moved to Knoxville a decade ago from Atlanta. His Piano Project is joined by several Knoxville organizations, including the Downtown Knoxville Alliance (which provided a grant for the project), the City of Knoxville, Dogwood Arts, and the Knoxville Public Arts Committee’s Arts in Public Places.

The pianos were painted at Mighty Mud by artists Megan Lingerfelt, Antuco Chicaiza, and Will Lunsford and serve as visual art as well as providing music. Brian got the idea when visiting Atlanta. He saw a public piano, sat down and played, and was followed by a twelve-year-old doing the same. The two had a conversation and shared a connection that he realized would never have happened had they passed in the absence of an instrument. He brought the idea home and the project was born.

Mayor Rogero was on hand to help launch the project and said she’d first had someone suggest it to her a couple of years ago but that the difference this time around was Brian’s willingness to do the work. “Art should be out among us,” she said, noting  local murals on the sides of buildings and garages, in alleyways and under overpasses. “Music and art can create the opportunity for surprise . . . creating important conversations and showcasing” local talent.

It’s not the first time we’ve seen pianos outside in the city. In 2012, pianos placed on Market Square as part of Rhythm N’ Blooms were enthusiastically embraced, albeit for a short duration. Plans for the new pianos include leaving them out through the fall, at which point the initial three will be donated to schools or nursing homes. Three new pianos will be placed in spring, then three in the summer will be rotated in, with plans to continue the cycle.

Locations for the pianos will be Market Square, Krutch Park Extension, and the 100 Block of Gay Street (with perhaps shared time in the Old City). Individual volunteers have agreed to cover and lock them nightly, or when the weather is poor, in order to keep the pianos safe, and to avoid keeping downtown residents awake too late into the night.

You can learn more at the website for the Piano Project of Knoxville. They also welcome financial donations or donated pianos. Brian told the story of one wonderful couple who, upon hearing of the local effort, donated the baby grand piano their deceased daughter had played. He’s looking for an appropriate public space for that piano in order to appropriately honor the donation of the couple and their daughter Rebecca.

So get out and make music Knoxville. If you take photos with the pianos or talk about them on social media, the organization would love to see your post. Tag them at #pianoprojectknox or #sitdownandplay.