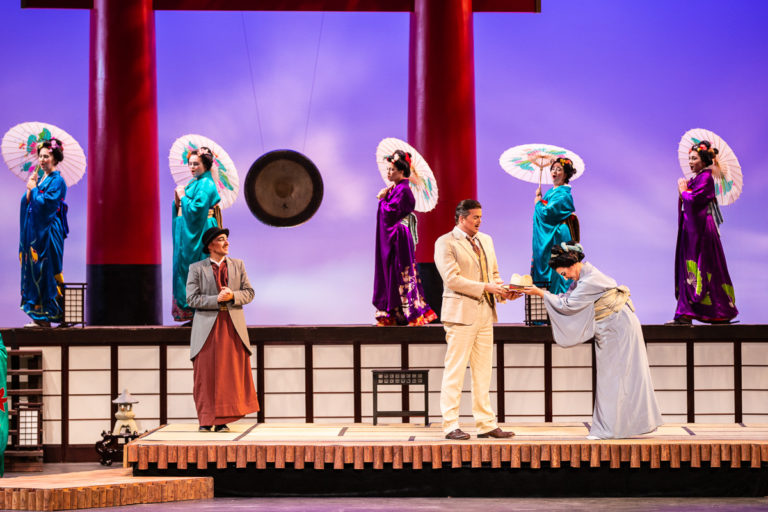 Knoxville Opera begins its new season in the Tennessee Theatre with a production of Madame Butterfly. First produced in Milan, Italy, in 1904, the opera has gone from being not well received initially to one of the most performed operas of all time. With music by Giacomo Puccini and libretto by  Luigi Illica and Giuseppe Giacosa, it underwent revisions after its two-act debut and became a three-act production. Both versions are currently presented, and Knoxville Opera is presenting the two-act version.

The libretto for the play, set in Nagasaki, Japan, is in Italian with English subtitles. As with many operas, and as almost always with Puccini (Knoxville Opera has also performed his Turandot, La Boheme and Tosca), the music steals the show. Sponsored by Sharon Lord, the music is provided by members of the Knoxville Symphony Orchestra under the direction of Executive and Artistic Director Brian Salesky.

The plot isn’t complex but this one delves into some issues that continue to resonate over one hundred years after its first production. Because of poverty, Cio-Cio-San (the role of Madame Butterfly, performed by Metropolitan Opera soprano Danielle Pastin) is forced to become a geisha at a very early age and enters a brokered marriage at age 15 with a U.S. military officer. The terms are for 999 years with a monthly option for renewal.

Everyone involved, except Cio-Cio-San, seems to understand the marriage will not be honored. Lt. B. F. Pinkerton (performed by Richard Troxell, star of Frédéric Mitterand’s award-winning film version of the opera), confides in the American Consul that he will one day get a “real American wife.” Cio-Cio-San converts to Christianity to honor her new husband and is disowned by her family. She also adopts America as her own.

Pinkerton eventually leaves her pregnant and waiting for his return. He returns after three years with his new American bride. He learns of the child and makes arrangements to take the child from Cio-Cio-San, who will now have to choose between returning to her life as a geisha or leaving this life with honor. It’s an opera. She’s a soprano. You can guess what happens.

Stage director is Brian Deedrick. Lis Chavez plays Suzuki, Sean Anderson plays Sharpless, Nicholas Nestorak plays Goro, and David Crawford plays Bonzo. The production will be presented Friday night and Sunday afternoon at the Tennessee Theatre. Tickets may be purchased here. Not sure about attending an opera? Here’s everything you need to know.