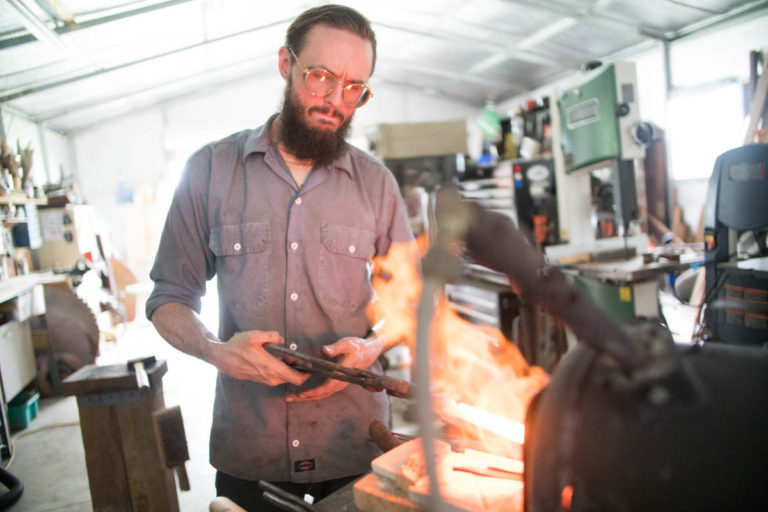 “Every step of the process can kill you.” These are the first words that arrest my attention as I sit down with local knife maker and blacksmith, John Phillips. I’d been hearing I should connect with him and eventually, he reached out, saying he’d been hearing the same.  By the time we finished I was dazzled by the blades he’d brought and the skill he brings to his art.

John was recently invited to participate in the ultimate blacksmith challenge on The History Channel’s most popular show, Forged in Fire. The competition show features blacksmiths given random materials, a task and limited time to complete their assigned project. The rounds proceed through elimination challenges until one blacksmith is left standing. John’s episode will air tonight at 9:00. A free viewing party at Scruffy City Hall starts at 8:00 PM with a meet and greet with John followed by the viewing and a knife giveaway to one lucky guest. You can see a preview of the episode here.

John was born in Chattanooga, but said his family moved a lot, living everywhere from Asheville to Oklahoma and Utah. He ultimately graduated from high school in Nashville. He attended UT during a time he describes downtown as dead and abandoned – the perfect spot for climbing through and on top of old buildings.

He dropped out of art school and began making furniture and doing other woodwork. He poured concrete counter tops for David Dewhirst, built out the interior of LaCosta, worked at Bird on a Wire Studio, Ironwood Studios and at Heuristic Workshop in the Jackson Terminal Building before its conversion.

He helped Matt Morelock open on Gay Street and built the bar at Suttree’s. Before it was Suttree’s he used that location as his studio. For that project he tried to channel the character from the book, using old doors he got at Knox Heritage, salvage wood and tiles connected to Knoxville’s history, drawing the history into the new space.

He incorporated metal into his work and became interested in making himself a knife when a search for a nice one didn’t yield one that felt right. “They all felt manufactured.” He thought it couldn’t be that hard.

It was far harder than I knew. I knew nothing about metallurgy or ergonomics. One thing led to another and I got addicted. There are probably more knives made than any other tool in history, yet there is infinite room for more designs.

He made his first knife in 2014 and says most people thought he was crazy to think he could make knife construction his focus. In 2015 he sold his first knife at the Christmas Market at Ironwood Studios. He made it out of old files and charged $20. By 2016 he was beginning to think bigger. He taught at Arrowmont and picked up a 1931 Little Giant power hammer there for cheap. “No one knew what it was and Arrowmont wanted it gone.” At 1600 pounds, it was a challenge to get it to his backyard studio in North Knoxville.

A chance meeting in Nashville became a major turning point. He says a number of people asked him if he knew Sean Brock, James Beard Award winning chef behind the Husk restaurants in Charleston and Nashville. It became a bit of a joke and he was surprised to see him come by his table of knives at a market in Nashville. Chef Brock brought everything he had under $300 the first day, coming back the next day to buy his most expensive knife. The two had coffee together.

Last summer, Chef Brock posted a picture of that knife on Instagram. By the next morning John had 3,000 social media notifications. Not only did his social media following explode, so did orders. He says some of those people still don’t have their knives and he’s had to temporarily shut down custom orders.

His sales had been slow prior to that time and he felt he’d exhausted the market for the upscale knives. With the new influx of money he began outfitting his shop properly. He added proper electricity and got rid of the extension cords running from the house. He built custom machinery that would allow him to more fully realize his vision. He’s yet to bring on an apprentice, siting the aforementioned dangers associated with the grinding and rapid-speed belts. The video below by Rob Travis gives a little taste of the process, though it is a couple of years old.

It was three years ago the History Channel first contacted him with the possibility of being a part of the Forged in Fire program. At that point he’d never seen the show. He filed out a questionnaire they provided and had an interview via Skype. Then he heard nothing. After a year they contacted him and conducted three more interviews. They said they wanted to use him and another full year passed.

When he heard from them a third time he didn’t think much of it until they called and told him to be in New York in a week. The competition started in their Connecticut studios and he’s not allowed to tell the results until after the show airs tonight. Still, he admitted it was intense and he’s glad he went through the experience. He may be in for another wave of intense exposure after the airing. 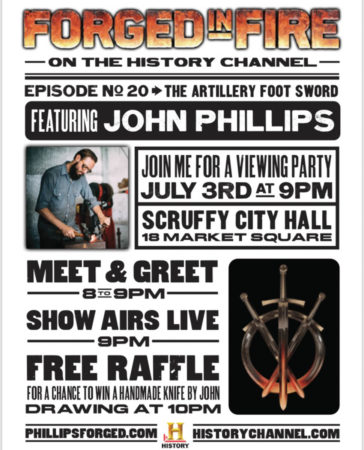 He plans to continue refining his processes and experimenting with metal combinations and more. He uses all manner of found metals such as saw mill blades, plows and a wagon wheel he found from the early 1800s. He’s spent years researching metallurgical journals and archaeological studies. He’s gone as far afield as to make a black blade using instant coffee in the process. The knives are often multi-layered with distinctive striations and a silver and copper band to attach the handle.

Those present tonight at Scruffy City Hall will have a chance to win a knife. Others may follow him on Instagram where you’ll find more photos of his beautiful work or like his Facebook Page. Check out his website where you can sign up for his email list. It’s via this list that he’ll make announcements about new knives. He hopes to develop an economy line of knives that will be available at the new butcher shop when it opens in the Old City.