Restaurant Review: Up Close and Personal at Rebel Kitchen 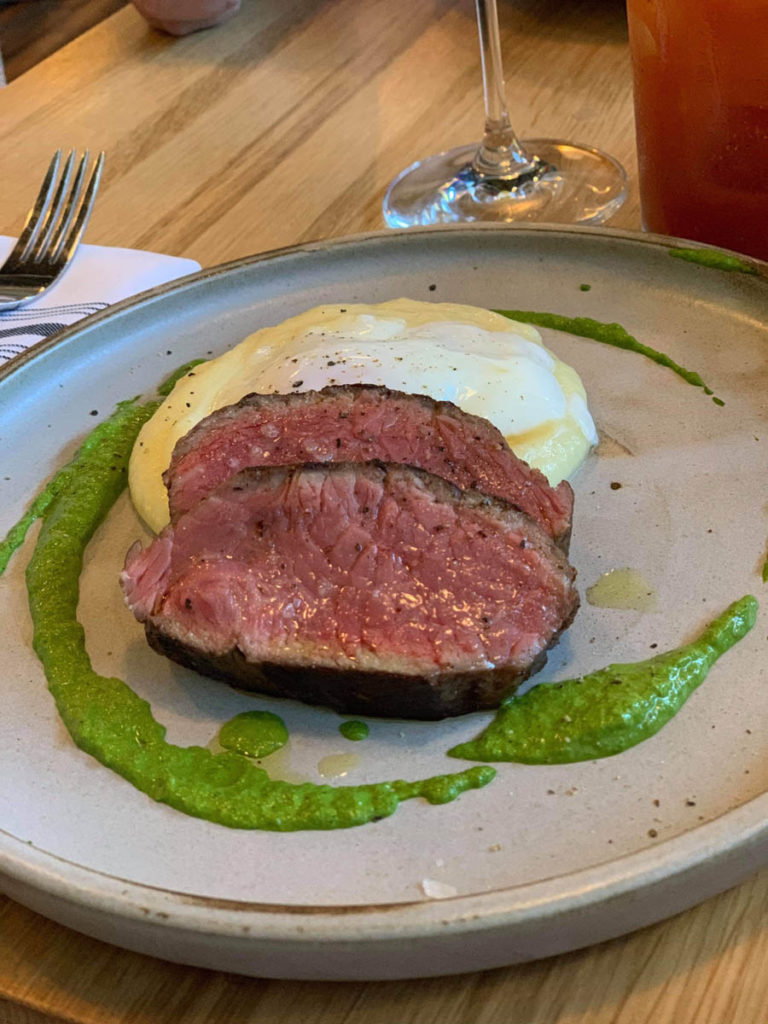 (Written by AppalachianGastroventures for Inside of Knoxville. This is the second installment in their monthly series of restaurant reviews, allowing for further exploration of local restaurants after their opening. Check out their blog for many more reviews!)

We ended our first visit to Rebel Kitchen with a taste of the unconventional. Chef Preston Williams and some of the staff had that morning been to a local farm for a foraging trip, and after we finished off the last bits of a buttermilk panna cotta and pecan tart, our server, Ian Bolden, asked if we’d like to try some pine pollen pods. They’d been sitting inconspicuously in a bowl on the counter overlooking the restaurant’s kitchen next to where we enjoyed our meal.

We’d trusted Williams and his staff this far as they navigated us through a brilliant dinner. We figured, “Why not?” and grabbed a handful, popping them in our mouths like candy.

The strong scent of pine is unmistakable in the Appalachians, but this was not the pine sap-sticky memory of your youth: the pods had a delicate sweetness, a delightful crunch, and the hint of pine flavor. It wasn’t nearly as overpowering as we’d imagined it would be, and it was a wonderful surprise to end our evening. But it was even more of a surprise when we returned several weeks later for Rebel Kitchen’s new brunch offering when we found the pine pollen pods integrated into the menu.

Their delicate sweetness decorated the same panna cotta we’d previously had, this time paired with candied dandelions, giving the dish an exquisite balance of sweetness and earthiness.

Such is every meal at Rebel Kitchen, where you can expect to be surprised, and delighted, at every turn.

The Old City restaurant, tucked away on West Jackson Avenue in Old City Knoxville, opened last year but recently underwent a change in leadership with Williams replacing chef Paul Sellas. Williams is from Greensboro, N.C., and he helped open Rebel Kitchen, playing a part in creating a culinary destination where risk-taking and unique pairings are the norm. Under his leadership, the restaurant is benefiting from the addition of Sunday brunch and an expanded menu at the adjoining Old City Wine Bar.

On our first visit, we purposely made reservations for the counter overlooking all the action in the open kitchen. Gazing upon the tantalizing menu and seeing the creation of the plates really gives one the full view of what you can enjoy once you place your order.

Rebel Kitchen centers its menu on what is in season and what is locally available. They strongly support local farmers, fishermen, and dairies, and they are doing their part to support sustainability in any way they can.

Our meal began strong with an appetizer of prawns with royal trumpet mushrooms, jalapeno, sautéed onion, seaweed salad, and some delightfully crunchy bean sprouts. The prawns were perfectly tender with such delicious notes from all the other components. It is truly unlike anything we’ve ever had before, which is a credit to the seaweed salad. Along with that, we decided to try out the mushroom “bolognese” from Mossy Creek Mushrooms, which was incredible paired with the luscious fresh pasta. T isn’t always such a mushroom lover, but both of these dishes made him rethink that for sure.

Initially, J considered the vegetarian Royal Trumpet mushrooms as a main course, but quickly changed course after our server described the North Carolina trout with watercress, fennel, and radish.

To say that this was some of the best trout we’ve ever had would be an understatement for sure. Growing up along the creeks and rivers of Western North Carolina, J has had her fair share of trout, but this was something almost magical. Chef de Cuisine Amber Reed absolutely killed it when it came to crisping the skin and cooking the filets to a perfect texture. Topping sautéed watercress and fennel along with fresh, thin slices of radish, this dish was mind-blowing.

T is a lover of all things pig, much like the late, great, Anthony Bourdain, and he chose the Berkshire pork chop that was deliciously moist and juicy. It was plated on gorgeous pottery (which all items were) with a nice serving of lightly sautéed chard and perfectly pickled jalapeno slices.

A follow-up visit for brunch was equally impressive; a rich, lick-your-plate-clean sausage hash topped with a soft egg seemed to melt in our mouths while perfectly medium rare strip steak was complemented by a vibrant chimichurri sauce and the creamiest mashed potatoes we’ve ever had (the secret apparently is a LOT of butter). Our only regret was not trying the “Shrimp and Grits”: prawns and a soft egg over a seaweed salad and pickled jalapeno. After sampling the seaweed salad as part of a shrimp appetizer during our first visit, we would have loved to see how the addition of a soft egg changed the dish.

Never skip dessert at Rebel Kitchen. While the variations often change, the restaurant can be counted on for unique pairings. We didn’t think the Cruze Farms buttermilk panna cotta topped with a blood orange puree and capped by a single wild violet for garnish could be outdone, but the addition of candied dandelions and pine pollen pods during brunch did the trick. And the pecan tart is almost reminiscent of a ginger Moravian cookie in its delectable flavor. It was topped with juicy segments of orange and blood orange nestled amongst piped cinnamon whipped cream.

It was a polished finish to any meal, and like everything at Rebel Kitchen, it certainly wasn’t predictable.