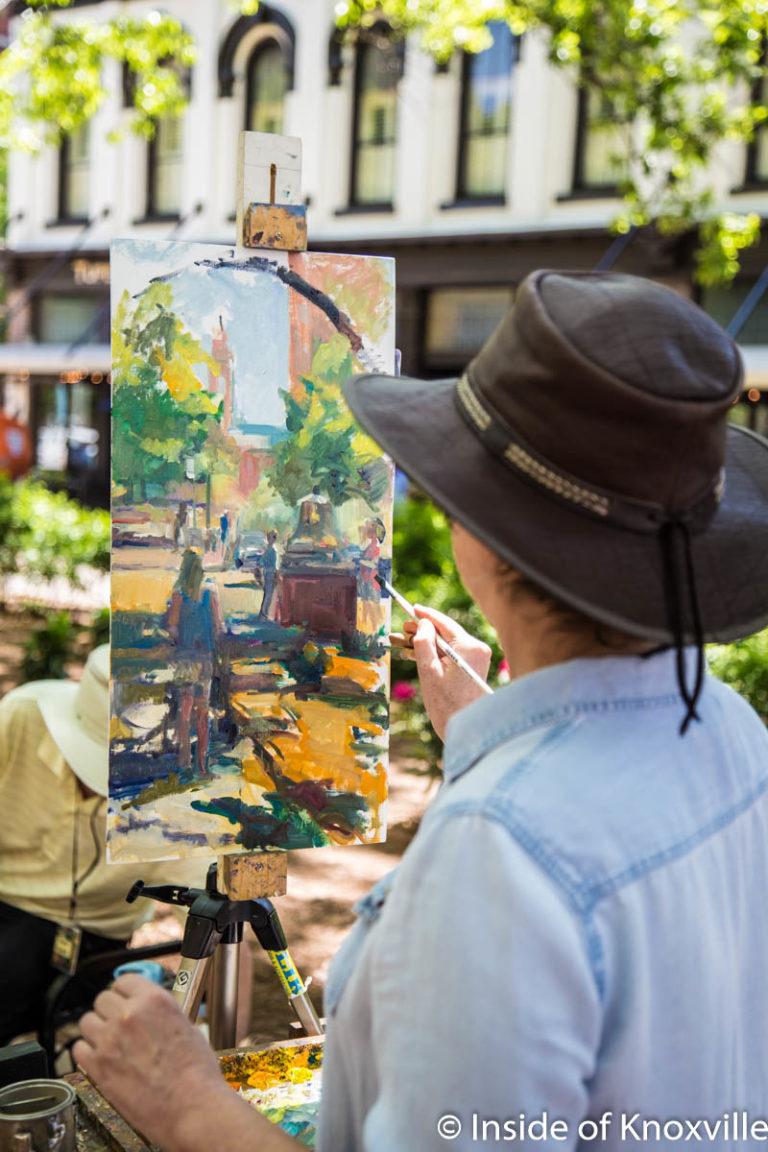 A couple of weeks ago, you might have noticed artists spread around Market Square painting the scene before them. You might have encountered some of these same artists at any number of locations in the Knoxville area, as the Knoxville Museum of Art hosted and presented the week-long “Artists on Location: A Plein Air Painting Event.”

It’s a simple enough concept: paint outside. But there’s a history there and, as it turns out, painting outside can be quite complicated. Before the mid-nineteenth century, supplies weren’t easily portable. A simple invention, the box easel, made moving paint, canvas, easel and palette to outdoor locations much easier and many artists moved outdoors. There are still variables such as weather, bugs and other humans that make the enterprise a bit more dicey than painting in a studio.

If you think about impressionist paintings, your mind probably goes to Monet’s lily pond or scenes of outdoor garden parties, people in the park, children playing outdoors, and more. It was a new focus as the impressionists and others attempted to capture the ephemeral qualities of natural light in a way it had never been captured on canvas.

Plein air events for artists have gained in popularity in recent years and have an added twist of time and subject constraints. For this event, selected artists were given just five days to complete their works before the final exhibition and sale, held inside the Knoxville Museum of Art on the sixth day.

Camille Day from north Georgia was the featured artist for the event. Matthew Lee caused a buzz on social media during the week when his painting “Red Doors of St. John,” picturing the red doors at St. John’s Cathedral was posted. The doors practically glowed.

At the end of the day, the blue ribbon went to Craig Reynolds of Gulf Shores, Alabama for his painting, “Moonrise.” Mr. Reynolds told me he participates in one or two of these events each year in different locations around the country. He’s been to Knoxville before and, after painting Cades Cove for the week, learned the lesson that less travel means more painting, so he looks for locations with lots of nearby appealing scenes.

His painting of Strong Alley, “The Market Place Graffiti,” cast that spot in a very different light, sort of a blend of festive and foreboding. He says a completed painting a day is normal and that on a good day, with a rich location he may complete two or three.

The culminating event was well attended and those present were able to see our city and area through the fresh eyes of the gathered artists. Some of the simplest local elements were given a fresh dignity on the canvas and some of our best known sites were represented as well. It’s an annual event, so watch for it next year. It’s just another way that art makes us richer simply by its presence in our midst.