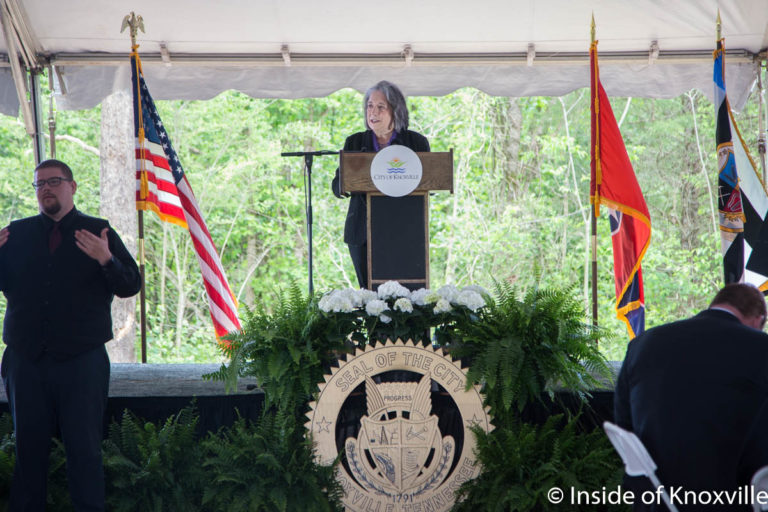 Mayor Rogero's State of the City Address at the site of the future Urban Wilderness Gateway Park, Knoxville, April 2019

I recently took a walk from downtown to the future site of the Urban Wilderness Gateway Park. The occasion was Mayor Rogero’s final State of the City address. It wasn’t exactly a “farewell,” as she is in office the rest of the year, but it felt a bit like the beginning of goodbye.

I walked because I was curious to see the length of the walk from Gay Street to what will be the primary entrance to the trails. Someone, I think it may have been councilwoman Stephanie Welch in whose district the Urban Wilderness is located, described it as a “stone’s throw from downtown.” Somebody’s got a stronger arm than this ol’ boy.

I routed the walk as close to the planned connecting greenway as possible. A new connection will come out of Morningside Park, just behind downtown and will cross the south Knoxville Bridge which will have traffic reduced to two lanes. It wasn’t a bad walk, but it wasn’t pleasant to walk on the shoulder beside speeding vehicles, so it should be great after the work is done. The distance? About 6400 steps or fifty minutes at my pace.

That means that less than an hour walk over a dedicated greenway to the entrance opens up over 40 miles of trails and hours of exploring. And it’s just (a few) stone throw(s) from the heart of the city. I’m excited to have the possibility of a day hike in the woods that close to my urban home.

The State of the City address is a chance to talk about where we’ve come in the last year and to outline budget and other priorities for the coming year. Mayor Rogero took the chance at her final such address to welcome her 92-year-old mother and two of her grandchildren, before getting down to the meat of the event.

She started off talking about the financial health of the city, saying the finances are healthy and pointing out a bit later that money had been put back for some of the projects which have been announced, but haven’t started or been completed. There is no tax increase in the budget which gives a final and emphatic answer to the people who said at the beginning of her eight years that she would tax the city into ruination.

Saying that the budget includes funding for a $40,000 beginning pay level for police officers, she pointed out how understaffed the department is as they struggle to attract recruits. That led into information regarding the current search for a new location for the Public Safety Complex, which she said will not, after all, go to the Knoxville College campus, but rather will be located at the former site of St. Mary’s Hospital. A portion of the location will become the complex and another (northern) section will be offered for redevelopment.

Infrastructure is always a major portion of a city’s budget and Mayor Rogero highlighted several aspects of the category. The 2015 bicycle facilities plan will continue to be funded as will KAT’s 2015 plan. Work will continue on greenway corridors and the ongoing sidewalk study will receive an additional $1.2 million in funding. She also mentioned expanding trolley service to include the south waterfront.

Support for mental health treatment for those in need as a preferred choice to incarceration will continue. Funding is included for a permanent jobs program for formerly incarcerated and homeless citizens, with nearly $3 million going to social service agencies to coordinate those efforts.

Downtown was alluded to as an example of success over the last decade or so. She touted the strategy the city has pursued of supporting development from the center out via “tifs, pilots, streetscapes, historic preservation and facade grants. She noted that parking lots are being developed and people are moving downtown in large numbers. She talked about continuing the effort to expand the success out the corridors, particularly mentioning Chapman Highway.

The enviroment and green spaces also garnered attention in the address. Noting that goals had been set during the Haslam administration to reduce the city’s greenhouse gas emissions 20% by 2020, she said those goals have already been exceeded and new, aggressive goals will be set. In addition to the $10 million already designated to develop the Urban Wilderness Gateway Park, the budget includes $1.2 million for Fort Dickerson and $500,000 for Ijam’s capital campaign.

Baseball has, of course, been a hot topic in the city. Mayor Rogero talked about how disappointed she was when, in 1999, the Smokies (the KJays) moved from Knoxville. In an encouraging note for urbanists, she said the city has done extensive research on successful baseball parks that are centers of year-round activity. Funds have been set aside to allow for funding and borrowing that may be required in negotiations to return the team, but she acknowledged that would  not happen during her tenure, but would be owned by the next mayor.

Concluding the specifics, Mayor Rogero said that the budget of $336 million represents a 10% decrease over the last budget because of obligations which were fulfilled. With no property tax increase, she said the adjusted tax rate in Knoxville is lower than it was ten years ago and that the city has a $71 million fund balance and the highest credit rating in the history of the city.

As a final thought, she said, “A great city makes informed and tough decisions.” She referenced past attempts to find a silver bullet to save the city and concluded, “Our silver bullets are our historical buildings, walkable downtown, volunteer spirit and natural resources . . . authentic Knoxville is our silver bullet.”