Fragile and Fading Structures Near Downtown 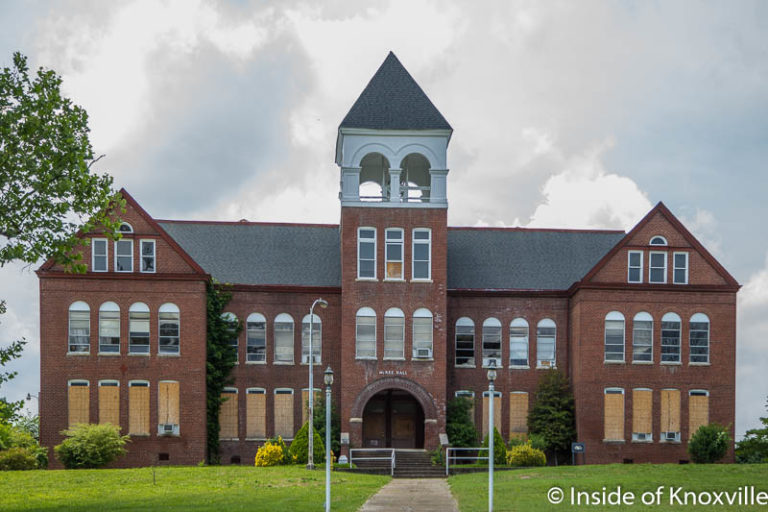 May is National Preservation Month. Knox Heritage, our local preservation organization, uses the month to highlight properties which appear to be in real danger of being lost. Previously titled “Fragile Fifteen,” the list is now called the “Fragile and Fading.” The list is a bit shorter, allowing for more concentrated focus.

Some of the properties are downtown or near downtown, while others are a bit out of the area covered by this website. There are no real surprises on this year’s list — or for that matter, rarely is there a surprise on any year’s list for people who pay attention to such things.

It’s also easy to think we’ve moved beyond demolishing buildings or allowing them to be lost by years of neglect. The truth is quite to the contrary. During the nine years I’ve written this blog, a number of properties have been lost in Fort Sanders, two were demolished downtown and another two burned, including the largest building still vacant in the downtown area, McClung Warehouses. More could be lost if we aren’t vigilant. Here are the areas and structures in and near downtown, which are spotlighted this year:

Fort Sanders is named for the Civil War-era Union bastion that once stood near the center of the neighborhood and was the site of a key engagement in 1863. During the 1880s, several of Knoxville’s wealthiest residents built notable houses in the area alongside more modest dwellings for plant managers and workers employed in factories along Second Creek. Fort Sander’s residents included some of Knoxville’s leading industrialists and politicians, as well as professors from the University of Tennessee and the author James Agee. Today, the neighborhood still contains a notable number of its original Victorian-era houses and other buildings which were added to the National Register of Historic Places in 1980 as the Fort Sanders Historic District.

Fort Sanders suffers from popularity. Its close proximity to downtown Knoxville and The University of Tennessee makes it an ideal location for dense housing developments which are not part of the traditional streetscape. Many homes have been destroyed over the years either for new development or from neglect. The historic neighborhood is bounded to the west by the thriving Covenant Fort Sanders Regional Medical Center campus and to the south by a dramatically changing Cumberland Avenue corridor. Increasingly dense development, inappropriate renovations, and teardowns are destroying the character of this charming neighborhood.

Knox Heritage is currently restoring a home that was saved from demolition by moving it across the street. Our organization encourages community support for this neighborhood that can result in more sensitive development, better renovations that adhere to the current design guidelines, improved infill standards, and policies that encourage owner-occupied housing to restore balance to the once predominantly single-family residential nature of the neighborhood.

More have been lost in recent years and primarily they have been lost to the University of Tennessee and Covenant Fort Sanders from whom the home mentioned in the press release had to be saved. The historic designation has done little to stop either institution from destroying any structures which get in their way. The neighborhood is indeed being lost and these two institutions are largely responsible. Credit should also be given to slum landlords who rent to students and allow the Victorian homes to fall down around them.

Knoxville College was founded in 1875 as part of the missionary effort of the United Presbyterian Church of North America to promote religious, moral and educational leadership among freed men and woman. The National Register District is composed of eight contributing buildings. The campus was the first African American college in East Tennessee and hosted prominent figures such as Frederick Douglass, Booker T. Washington, W.E.B. DuBois and Martin Luther King, Jr.

While pursuing their education, students assisted in the design and construction of these historic buildings and used bricks made on campus. The historic buildings, with their fine craftsmanship and solid design, deserve to be restored and used again. Currently all campus building are condemned and suffering from a severe lack of maintenance. Arson fires and the fact that it is now completely vacant have heightened the critical need for immediate intervention.

Knox Heritage encourages more partnerships to emerge that can work together to save this significant site. The Knoxville College Board of Trustees have been applying for a variety of grants to assist with stabilization efforts.

The city government has tried a number of solutions to this problem over the years. Most recently a proposal to move the Safety Center to the location. The plan was officially nixed because Knoxville College could not restructure its debt, but there was also a vocal resistance to having the police located there. The result is an empty campus and empty buildings do not end well.

Knox Heritage would like to see all renovations within the National Register district adhere to the Secretary of Interiors Standards. New infill should be sensitive to the historic character of the neighborhood. The organization seeks to work with homeowners on good design practices and will launch the first local H-1 Overlay Gap Fund in partnership with the City of Knoxville’s Preservation Fund to assist low to moderate income homeowners with making repairs in compliance with design guidelines.

Knox Heritage continues to encourage the owners and other stakeholders to make the redevelopment of the structure a top priority since its condition has a negative impact on the surrounding historic neighborhoods. Knox Heritage will be writing the National Register nomination for the building which, if designated, will create an opportunity for a developer to use federal rehabilitation tax credits as part of a financing package. A mixed-use development combining office, retail and residential tenants would add to the city’s tax base and spur on the renaissance underway in the surrounding historic neighborhoods.

Many great buildings fall victim to poor owners. Sometimes the damage is accidental, sometimes deliberate and other times inexplicable. SKM Holdings is the official owner, but that is simply another name for the various entities owned by Brant Enderle. A number properties held by this group have been sold in recent months, so there is hope, but it is running out for this building.

The Pryor Brown garage is an early example of a mixed-use structure featuring parking decks along with several retail spaces along both Market Street and Church Avenue. Its builder was Pryor Brown, a Knoxville businessman who moved to Knoxville and found work in local livery stables. By the 1890s, he was running his own stable on this site along Church Avenue.

After a fire in 1916, Brown rebuilt his stable with concrete floors capable of accommodating cars, and ran the Pryor Brown Transfer Company. With the popularity of automobiles growing, Brown expanded the garage in 1929 covering the area of his old livery stable. The parking garage is a remarkable story of continuity on one site and is one of the oldest parking garages still standing in the United States.

Knox Heritage encourages the re-use and preservation of this unique historic structure. There is great potential to compliment a broader redevelopment of this block of downtown Knoxville with the garage becoming a compelling piece, both historically and architecturally.

This one is in the heart of downtown and has so much potential that the thought of having it demolished is heart-breaking. It has appeared to be within days demolition in the past, then apparently saved, then the deal fell apart. It is owned by the Conley family and I’ve been unable to connect with them to gain any information about their current plans. Like the other buildings, time is not on our side.

I’ll end on a bright note: One downtown building that was long on this list, the Cal Johnson Building on State Street has a complete renovation underway. I first wrote about the plans here. So there is always hope for the others. Buildings can and do get saved. Here’s hoping for the ones listed above.