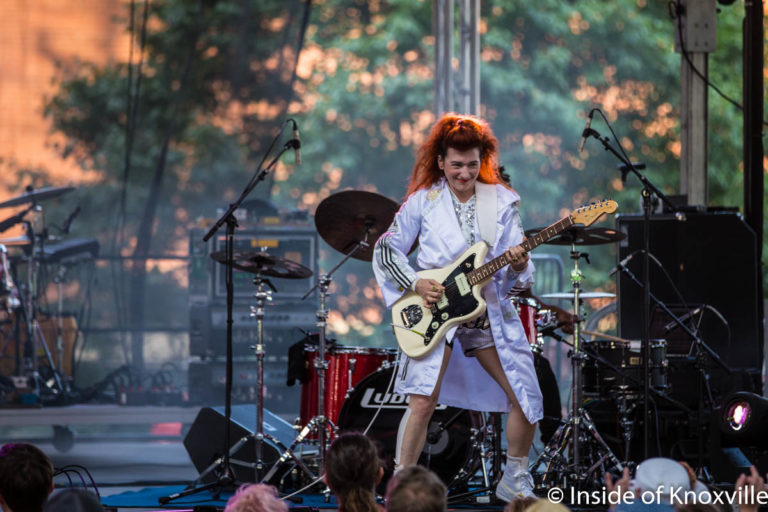 A wonderful edition of the annual Rhythm n Blooms, presented by Dogwood Arts and Attack Monkey Productions, has come and gone leaving festival goers exhausted and, hopefully, with a satisfying fill of their music craving for a while. By many measures this was the most successful in the run, with the first sell-out in its history. The weather with very little exception was, well, exceptional. A brief storm and a little heat can’t compete with last year’s cold rain. The move to May was a good one.

For me, it was a little different this year. I expected to miss most of it for various reasons, so at the last minute, when things cleared up a bit, I decided to take in as much as possible. By the time the dust subsided, I saw all or part of twenty-one different shows by different artists (I saw one twice). I was listening to music more-or-less for about twenty-one hours and took over 650 photographs. Exhausting. And exhilarating.

I started strong, then took breaks the rest of the weekend to be able to be upright when it ended and the hours of photo-editing began. I was fortunate to hear one of the artists before the festival-proper began, when I stumbled (uninvited, sorry!) into a pre-show with Andy Wood at Bluhen. I’d forgotten how good he is. Rock and roll guitar feels like a refreshing drink of water after a long, thirsty day.

One of the wonderful elements of the festival as it has evolved, is that the range of genres and performers has expanded every year. The wide spectrum of artists was an amazing element of this years’ show and the compacted footprint of the festival site made travel between the venues easier. I found myself gravitating to some of the lesser-known artists on the free stage on Jackson Avenue (a first) and at Pilot Light.

Nashville’s Katie Pruitt got things started at the festival and her singer-songwriter set was a strong beginning. I followed that with the intense and amazing set by Sarah Shook and the Disarmers. If you want to hear some great country music with a bite, check her out next week with Bark at Pilot Light. Pilot Light was where I caught Rainbow Girls and Cicada with a slice of the Black Lillies on the main stage squeezed in between. All bands were excellent, and if you haven’t heard the Lillies four-man incarnation, you owe it to yourself.

I caught Andy Wood on the small stage before checking out Tyler Childers back at the main stage. I’m not so familiar with him, but the size of the crowd and the thousands singing along suggests I’ve missed out on something a lot of people love. I ended my night early (12:30 AM) to preserve my strength, but not before hearing Philadelphia hip-hop/R&B duo &More (my favorite performance of the day) and Pittsburgh Rap artist Benji. In both cases, they presented my favorite blend of rap and melody, honest music and intelligent lyrics. It was a great way to end the day.

Saturday brought a visit from Urban Girl and Urban Boy, so I was out until afternoon, attending the Children’s Festival of Reading, the World’s Fair Park playground, fountains and the Sunsphere. I attended the wonderful spring concert by the Gay Men’s Chorus and had an early dinner with Urban Brother, Daughter and friends before walking to the festival about 7:00 PM.

Rayland Baxter gave a great show, as always. He was one of the artists I’d heard before but decided to hear again. A number of other artists I have enjoyed in the past, I decided to forego to experience new music. I kept it at the main stage for two shows in a row in order to hear – or experience – Tank and the Bangas.

I’m not sure what that was, but it was interesting. Visually arresting and musically eclectic, the band gave the crowd a party. Imagine an inflated woman leading a crazy, funky band steeped in New Orlean’s R&B and you get a little of the picture. It was for most people, I suspect, the most fun show of the weekend.

I decided to take in one more show and end just a bit after midnight with Sloppy Jane at the Pilot Light. Describing the show and her musical approach is far above the pay-grade of my musical vocabulary. Imagine intense punk music followed by a brief orchestral interlude followed immediately by controlled noise that would make Big Ears proud. Throw in eerie vocals from a duo seated in the crowd beside a television playing The Wizard of Oz. End it all with a beautiful piano ballad.

The band may well be the largest assembled on the tiny stage at Pilot Light. Seven members were on the stage and two more were just off. The bass player had to stand on his amp the entire night to accommodate the string section. It was as crazy as it sounds and I didn’t even mention the fact that lead vocalist Haley Dahl exploded blue dye from her mouth at the beginning of the show, then promptly took off her clothes. It was crazy, weird, powerful and my favorite performance of the day and likely the one I will remember from the entire festival.

The final day of the festival, I spent most of the day walking between the free stage and Pilot Light. While the first performance was by punk band Sunshine Still (a recent finalist in WUTK’s Battle of the Bands), I leaned mostly on singer-songwriters and well crafted folk-infused music. Sunday just isn’t an all-punk sort of day for me. On the free stage I heard Scott Mulvahill (awesome upright bass player and inspired song-writer), Frances Cone and Sean McConnell. I heard local favorites Joey English and Jubal in Pilot Light and they both gave excellent performances.

I ended on the main stage to wrap up my weekend. I didn’t do the late-late shows any of the nights. I over came my Fear-of-Missing-Out in the favor of modest sanity for my body. My Brightest Diamond gave a show even more visually arresting than Tank and the Bangas the night before. Shara Nova’s inner beauty shined from the beginning when she came out dancing in the crowd and sang directly to surprised woman and a bewildered little girl.

She danced onto the stage and worked magic with her multi-instrumental prowess set along side a lone drummer (with some electronics supplementing the performance. Her vocals (she majored in classical vocal performance) were repeatedly astounding. If you don’t know her work, she’s a good one to look up.

The night ended for me with Dawes, a California band that has, like co-headliner Tyler Childers, evaded my notice other than random mentions. They delivered a high-energy pop/rock show that engaged the crowd throughout and gave a high-flying ending to a great three-day run. For me, it was time to return home to edit photographs. In the end, I kept around 250 from the three days. Expect to see them pop up on the Inside of Knoxville Facebook Page sometime soon.