Plans for the new OliBea, Merchants of Beer and a Bit More 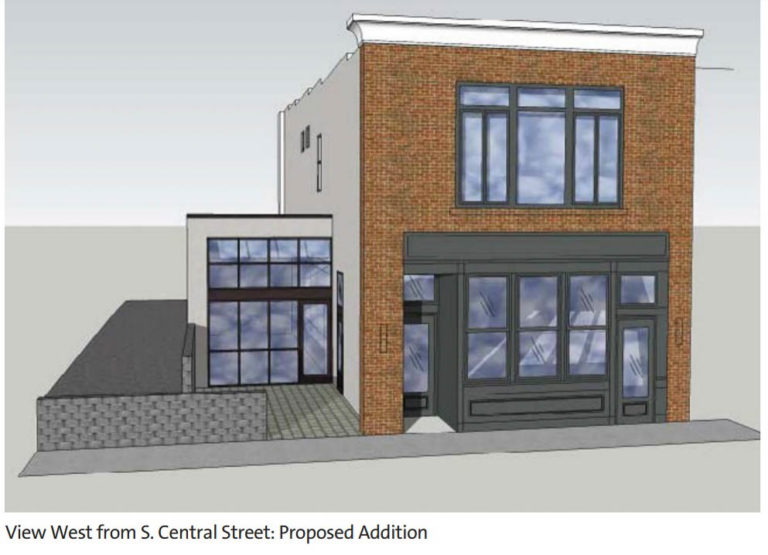 Several projects underway in and near the Old City are moving forward through the design phase, obtaining required approvals and nearing construction. It sometimes seems nothing is being done on announced projects when, in fact, a lot of work has to be done before breaking ground. Here’s a look at proposed changes and and plans presented to the Downtown Design Review Board at yesterday’s meeting.

First up is the new location for OliBea at 211 South Central Street (across from the downtown dog park). I first wrote about the move last December. Limited space and an inadequate kitchen led chef and owner Jeffrey DeAlejandro to consider another location and the building at 211 offered just what he was looking for.

The current plan calls for building an addition to the south side of the building to increase the size even further. The addition will include restrooms and additional dining space. It will be set back from the road and from the front of the main building in order to accommodate a large patio (about 18’X13′). A side door will be added to connect the main building to the patio.

The addition also allows for easier construction with the grease trap buried beneath the patio and the mechanical (hood vents, HVAC) located on top of the new addition. The mechanical equipment will be hidden by a parapet on top of the new structure. The primary dining area and large kitchen will be located on the main floor of the currently existing building. Alyssa Nealon is the lead architect for R2R Studio whose plans are included here.

A second topic up for approval was the signage for the new Bluhen Wellness Center. The new business was announced here last September and the new retail location was announced (along with a $30 Million investment) in February. Work is proceeding quickly and details are coming into focus. Michael Aktalay is the architect of record for Sanders Pace Architecture whose renderings are included here.

Last October when Thomas Boyd acquired the building formerly housing Crown and Goose, I also reported that he had purchased a share of Merchants of Beer and that plans were underway to transform a portion of the back parking lot into an outdoor space to complement the indoor portion of the business.

The plans for that are now becoming more clear with the presentation of plans to the Downtown Design Review Board. As proposed and designed by Michael Versen of Michael Versen and Associates, their schematic is included here. The current parking spaces directly behind Merchants of Beer will be replaced by an attractive courtyard.

The perimeter will be bounded by new fencing and a wall. Significant landscaping will include multiple new trees and shrubbery bounding the courtyard to the east and west, making the walk down that portion of Central much more attractive.

A food truck will be available to serve food to the courtyard and picnic tables will be placed to provide seating. A bocce ball court and a corn hole area will provide the option of a more active experience to guests. Questions were raised about a non-operable food truck and whether it will have to meet the requirements for a permanent structure and thus be subject to stricter regulations than an operable food truck.

These are a few of the moving parts in the Old City at this time. Clearly this section of downtown is hot once again. Some of us remember when this was the hot section of downtown. We’re seeing some long over-due momentum return to the area and along with street improvements completed by the city last year, this part of town promises to make more news as time passes.