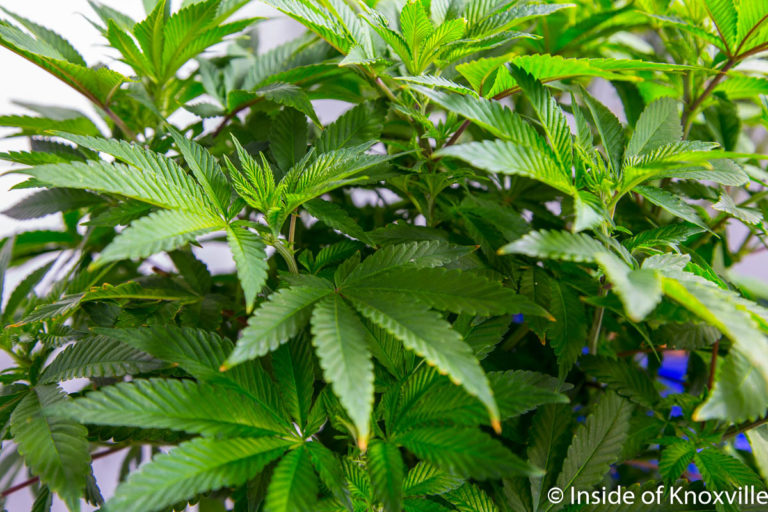 As momentum has spread nationally to legalize medical marijuana and, in some cases recreational marijuana, distinctions have also begun to be recognized between marijuana and hemp. Banned when marijuana became illegal, many states are now acknowledging that hemp has numerous potential uses, including the extraction of CBD (cannabidiol) for medicinal benefits. The industry is expected to surpass $2 billion by 2020.

Tennessee is one of the states to have allowed legal hemp production, acknowledging the potential benefits of the cultivars developed to have a higher CBD concentration. These cultivars have, by law, less than .3% THC, the psychoactive component of marijuana. Large hemp crops have been cultivated across a number of states, including Tennessee.

A local group, Blühen Botanicals, has constructed a research and development facility at 1329 Chilhowee Avenue to support their new company as they prepare for production of CBD oils and other products. The primary processing and production facility is planned for a larger space (18,000 square feet) at the former pie factory/Habitat for Humanity building at 2209 North Central – a building which was slated for demolition just last year. Plans also call for a CBD retail outlet at the spot.

While the crop has no recreational drug properties, the company has taken extreme security precautions at the research and development facility, just the same. Thirteen cameras currently monitor the site and more are planned. The windows have steel bars and the concrete block walls are filled with cement. The doors are steel.

The new industry is emerging under very strict controls. Joe Fox, one of the owners of the new company, says they are working closely with the Tennessee Department of Agriculture, which tests the plants to confirm the levels of THC. The company performs another round of tests, as well, and a third-party lab adds a third layer of testing. The R&D facility will provide seeds, seedlings and clones to farmers and also produce high quality hemp flowers rich in cannabidol.

Hemp production has been illegal since 1936. Largely produced outdoors, the Knoxville company will contract with farmers, but will also grow their own crop indoors. Testing is currently underway to develop insect and disease-resistant strains and cultivars which thrive in Tennessee’s climate and produce a high concentration of CBD.

When fully operational, the processing facility will be the largest in the state and, perhaps, the region. The indoor production facilities will utilize deep water culture hydroponics. Growth lights are all high efficiency LED lights, the HVAC is 23 SEAR, a water-recapture system has been put into place and required insulation has been doubled to make the 2,000 square foot R&D facility as energy efficient as possible. The same efficiency measures will be replicated at the larger facility.

The group has consulted with producers, researchers and industry experts all over the country in preparation for the start-up. A financial consultant involved with other hemp businesses was employed, along with a consultant from California who helped launch over 1 million square feet of production facilities nationwide. Locally, Sanders Pace Architecture and Build Knox Construction assisted in the build-out.

Fox’ friend, horticulture expert and now co-owner of the new company, Eric Maelzer, suggested he explore the option of developing a hemp company.The launch comes at the end of eighteen months of due diligence. Initially feeling the industry sounded like it was selling snake oil, he found high quality CBD products whose manufacturers were not making outlandish claims. He met people who told him stories of how their lives had been changed by CBD. He became convinced and now is determined to contribute to the science behind the helpful qualities of the plant.

The processing plant should be operational by the end of this year and will, “have the capacity to process 2,000 pounds of hemp biomass per day with the potential to rapidly scale its output beyond that capacity in the future.” With 2018 projected to be a 12-year low for U.S. farm income, the group hopes to be able to help Tennessee farmers rebound with an economically profitable crop.

The group is already positioning itself as an industry leader, as Blühen Botanicals will, “serve as presenting sponsor for the inaugural Southern Hemp Expo in Nashville” later this month. “The expo will showcase hemp producers, consumer brands and new developments in farming, genetics and hemp-based products.”

They hope to have the retail outlet open on Central by next spring. Check them out on Facebook and learn more at their website, as they begin the journey to putting Knoxville on the map for hemp research and CBD production.