Next Step Initiative: Grass Roots Help for Those Most in Need 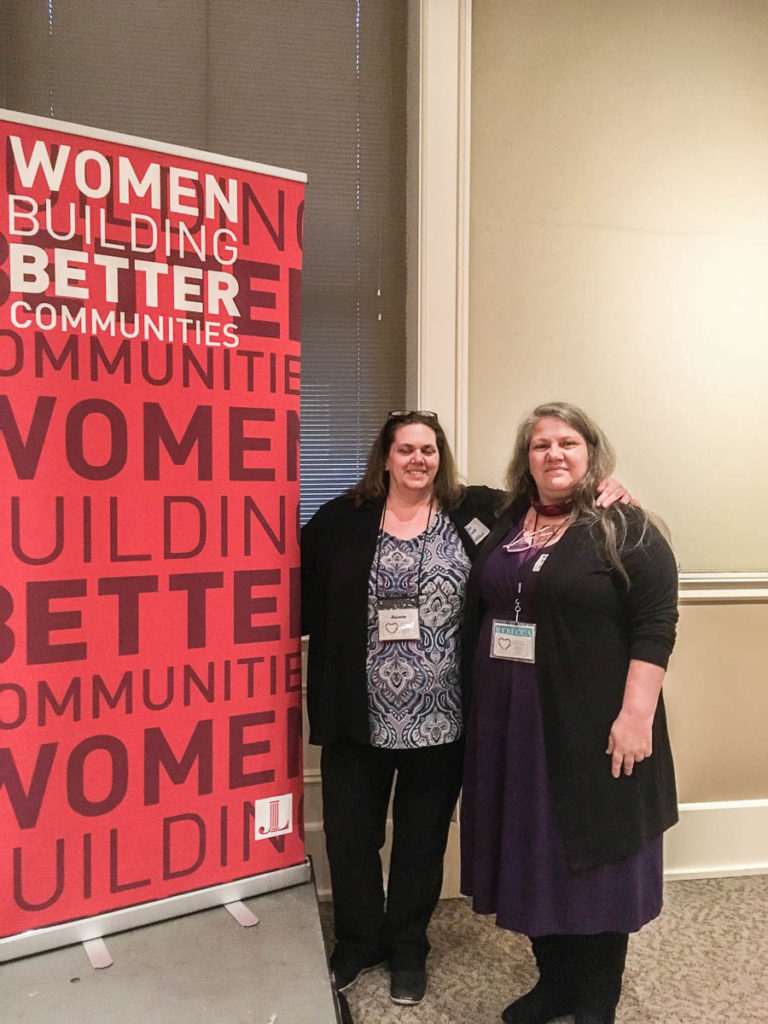 In less than two years, sisters Rebecca Parr and Addie Arbach (known on the street as “Miss Addie”) have transformed an idea into a successful intervention on the streets of Knoxville. Next Step Initiative, their state-registered non-profit organization (fiscal sponsor, Community Shares) offers hope to those who have long since stopped hoping for a better life.

The two had an unusual childhood, growing up in the club house of a biker gang. Their father, “King George,” ultimately died in prison from issues related to his drug use. Their mother, into communal living, ultimately became a social worker. The two are quick to say that theirs was a good childhood in which they were treated like princesses and told to, “do what I say, not what I do.” They say it made them tough and compassionate. 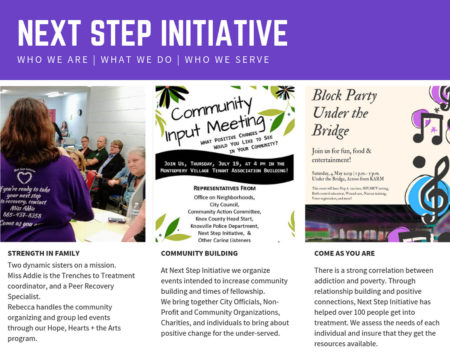 Addie who is a Peer Recovery Specialist went through rough times as an adult, losing a child to complications from drug use. She says she shut down for two years, doing only the minimal amount she had to do for the grandchildren she is raising. It was when Rebecca called her in September of 2017, on the birthday of her deceased son, that the two began the work that would help bring healing both to her and to many others.

Rebecca suggested the venture that led to a first community meeting in Montgomery Village in November. They offered food, activities and a focus on mindfulness which became the model for their Feel Good/ Happiness Hour. They offer Creative Circle for groups ranging from community to corporate groups.

Addie’s efforts cut directly to those in most need, while Rebecca furthers their efforts by coordinating with the city and with agencies. Often homeless, drug addicted and desperate, her Trenches to Treatment (which falls under the umbrella of Next Step Initiative) meets addicts where they are: on the streets, in  trap houses and under the bridge. Her approach is simple; “Are you hungry?” She always has food ready.

Her other children struggle. She has two who are in prison and a third who is near homeless and who struggles with addiction. “I do this in their honor. She started in Western Heights, but now approaches those in need in wide range of locations. She distributes and teaches them to use Norcan, which reverses the effects of an opioid overdose.

I realized so many people in my own neighborhood are homeless. They’ve burned so many bridges. I’m their bridge they can’t burn. I love them until they love themselves and are ready to do what’s right for them and get help.

She says she’s lost fourteen, but has helped one-hundred-sixteen get into treatment, usually at Buffalo Valley. The Norcan kits which she distributes and teaches them how to use are provided by Tennessee Overdose Prevention, through Metro Drug Coalition, They a member of the Harm Reduction Coalition, one of their many partners, as the two coordinate with numerous different agencies.

The two also distribute as many cell phones as possible, so they will stay in touch. She says she patiently works with many of them for months, but she’s very insistent to the women who are pregnant, sometimes telling them, “Your baby is going into treatment. You’ll just have to come along.” They take “friends,” (they don’t call them “clients,”) to Positively Living for needle exchanges.

Much of the work, the two say, is very basic. They teach that help is available even in the absence of insurance. Treatment and care may be obtained. Food is offered (often spaghetti made from pasta and tomatoes provided by Fish). “The issue is homelessness and jobs. They leave rehab and go back to their friends.

They’ve met, worked with and coordinated with Mayor Rogero, Councilwoman Stephanie Welch (against whom Rebecca ran in the race), Officer Clinton (who is the homeless liaison), Chief Thomas and many more. In a large community meeting earlier this year in south Knoxville, with Councilwoman Welch facilitating, they discussed their efforts. They want to dispel myths such as that the homeless population has moved into south Knoxville. They say many of them are from the community.

They offer gatherings including food and art each Saturday at Sam Duff Park from Noon until 2:00 PM. The friends they attract to the gatherings say it gives them something to do and to look forward to. Increasingly, people are donating food and they appreciate that. What they long for most is for people to come and simply engage those who show up, to be friendly and welcoming and to demonstrate simply by their presence that there is hope.

Rebecca summed it up as we parted, “It is all about compassion and come as you are.”

They are also having a big blow-out on May 4 under the bridge (I-40 overpass crossing Broadway). Block Party Under the Bridge will include nearly a dozen different agencies and groups offering help of all sorts, including Hep A vaccines, HIV/HCV testing, birth control education, wound care, narcon training and more. There will also be entertainment and food.