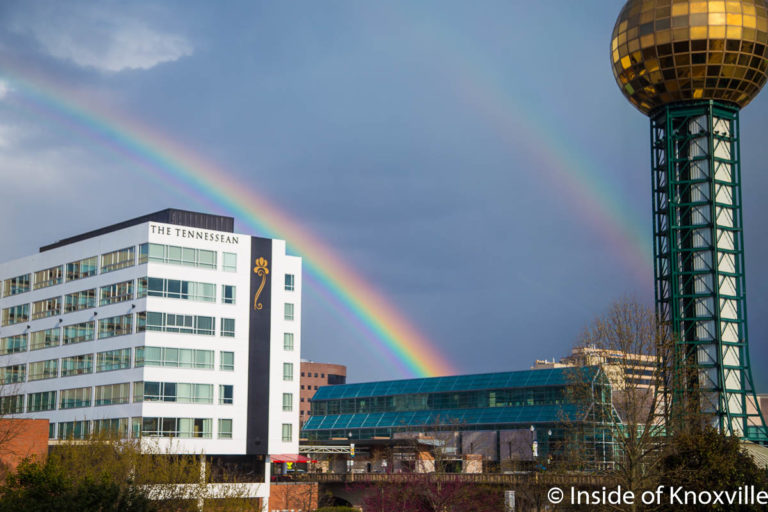 You know something good is going to happen when a double rainbow appears behind the Sunsphere during the opening ceremonies for Big Ears 2019 last Thursday afternoon. That was the view from the Knoxville Museum of Art where Ashley Capps, Mayor Rogero and Black Atticus welcomed visitors from 48 states and 21 countries. Members of the Found Sound Nation performance of Mosaic: Interactive provided our Big Ears sample and so, the festival began.

First up was the ballet. It might seem a bit odd to think of ballet and Big Ears, but not after this year. Long-term Big Ears participant Rhiannon Giddens (who I missed at the Blue Plate because it had reached capacity) wrote and performed (with Francesco Turrisi) the music for a ballet based on a book of poetry by poet Caroline Randall Williams, called “Lucy Negro, Redux.” Ms. Williams performs in the ballet as the narrator and alter-ego of Lucy.

The book of poetry and the ballet explores the possibility that Shakespeare’s “Dark Lady” who appears in his later sonnets is, in fact, a black woman. The beautiful ballet explores that inter-racial relationship with another between the African-American student and a British professor who invites her to England to examine the archives and explore the subject. The music and the ballet are beautiful. The ballet debuted in Nashville last month and this was its second performance.

I mentioned last year the range of approaches one might take to the festival. This year, I mostly selected the music I thought I would enjoy, as opposed to going for the most challenging or out-of-my-comfort-zone sort of music. The result either of my selections or the line-up this year was that I saw a lot more jazz than in previous years.

I also allowed myself the luxury of taking breaks, feeling that fewer shows, mixed with a little additional rest and food, would be a better choice in the end. I tried to see complete or near-complete performances, though that was a challenge because of the over-lapping shows, the fact that photographers are only supposed to shoot the first few minutes and the complication that many of the shows reached capacity before starting.

The fact that so many shows reached capacity was the only consistent complaint I heard. The app pretty constantly buzzed with updates that often included shows reaching capacity. Media, in my experience, were generally taken care of, but I felt bad for so many that were stuck in lines. Perhaps fewer tickets should be sold next year?

The other small issue I’d bring up has nothing to do with the festival itself, but with restaurants. I know restaurants have set hours for a reason, but there was a lot of money left on the table by restaurants that were closed Sunday or closed at their normal hours Friday and Saturday night. I wish concert-goers (and me!) had had more options for food after 9:00 or so Friday and Saturday and on Sunday.

After the ballet, I walked from the Tennessee to St. John’s Cathedral for Artifacts Trio. I’d discovered them as I planned my festival agenda and I was excited. They didn’t disappoint, with the trio providing my first infusion of jazz played on a cello, flute and drums. It was one of the first of many occasions during the week that I would wonder if my ears are bigger than they used to be, if the music at this year’s festival was more mainstream or if I picked safe choices. Maybe some of all of the above.

I also found myself drawn repeatedly to this venue. I’m sure a good bit of that was the nature of the artists who play there. They tend to be just a bit more quiet and delicate. Speaking of venues, I also didn’t make it to Church Street United Methodist or (after the opening) to KMA, simply because I would lose so much time walking back and forth. A trolley was provided, which was a nice touch, but it didn’t seem to be that much more efficient when I considered the wait time. It was helpful for people with mobility issues.

After that great show, I ended the night with a stop at the Standard for Moor Mother. It illustrated several truths, for my listening: First, no matter how intently you stare at your computer as it makes sounds, I’m not really enjoying the performance. Program the computer and make some music. Second, I feel so surrounded on a daily basis by (sometimes righteous) anger, that I can only take so much as entertainment.

This performance was too much for me. So, I left early, even though it was, at times, engaging, and melodically entrancing when the vocalist who sometimes accompanied her sang. No harm, no foul, just not my thing. Two out of three ain’t bad for an evening. It happens. Time to regroup for a long day on Friday.

I started Friday’s shows at noon in St. John’s for the performance of two virtuoso performers on their respective instruments: Bela Fleck on banjo and Columbia’s Edmar Castaneda on harp. Odd combination? Not by Big Ears’ standards. Two cultures, two very different instruments and two artists who had never played together? No problem! It was a great way to start the day.

It was followed by numerous great performances in a row. Lonnie Holley and The Messthetics were wonderful in the Mill and Mine. Lonnie has a great back story and an odd style that would be hard to categorize. At the time, I ranked this as my Big Ears favorite and I saw him a second time another day.

Meanwhile, back at St. Johns, Larry Grenadier delivered a wonderful set which sort of rose above genres to be its own thing. Part jazz, part classical, part experimental, he stretched the double bass to its limits in a fine show. A shorter walk to the Square Room, led me to a performance by Mosaic Interactive of their Memories set piece. Part experimental installation, part video production and part musical mash up of west and east, it was a a very powerful experience.

Next, it was back to St. John’s for a great set by pianist Shai Maestro and his jazz trio. That ended my uptown time for the day, and I began the next portion of the day with a fine concert by The Comet is Coming in the Mill and Mine. This was another show I’d looked forward to and they delivered. London saxophonist Shabaka Hutchings and bandmates delivered a set that was part jazz, part funk and all good. Great set.

I stayed to the end of Absint at the Standard, but found it a confounded set of random noise by, no doubt, brilliant players. I would enjoy Bill Frisell emensely at a later performance, but not so much this one. I cleansed my musical palate with Spiritualized. How did I not know these guys? We’ve played them since at home. Imagine if T Rex was backed by a gospel choir. There you have Spritualized. The same fuzzy sounds, similar melodies and a gospel trio providing an anchor to leader Jason Pierce’s vocals. One of my very favorite Big Ears performances.

It was probably the contrast that hurt the next two artists for me. I stayed at the Mill and Mine for Jlin, but left after a few minutes. It was another case of focusing on a computer combined with no lighting (hence few photographs) that just didn’t appeal to me. Fire at the Standard was my last stop and, while they were good, I opted to leave a bit early and get some sleep.

All-in-all it was a great day at Big Ears. The weather was great, people were happy and we were only half-way through. I hope to have the second half for you later today and the full trove of photographs on FB at some point after that.