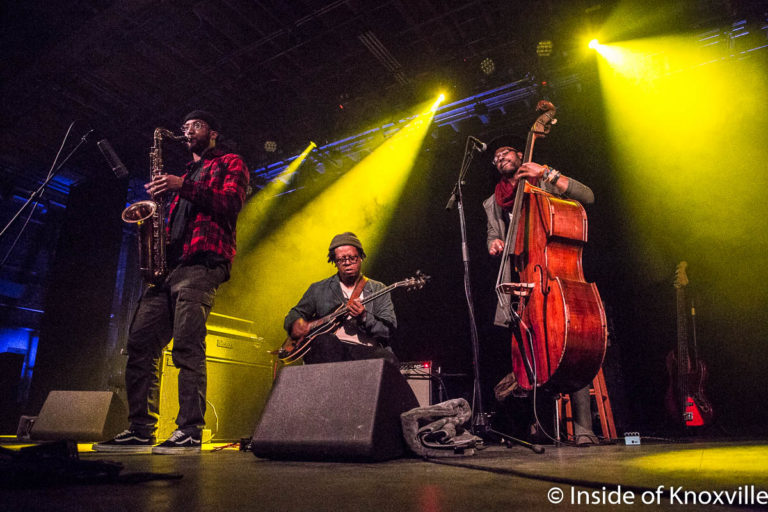 I got Saturday underway feeling pretty good and excited about the lineup. I started the day at The Standard with a beautiful show by Wadada Leo Smith, presenting “Reflections and Meditations on Monk. Sublime and beautiful, it was a sweet way to ease into the afternoon.

The Standard is a hard venue during Big Ears. A rush to the stage dictates position and if you miss the rush, the best photos are from the mezzanine and they aren’t generally very good. For some reason the person manning the small VIP section wouldn’t allow photographers to enter as at every other venue. So, no great photos from me, but a wonderful show.

I was only able to stay through about the first half because I wanted to catch Lonnie Holly with Nelson Patton at St. John’s Cathedral. The venue is so perfect for so many of the quieter artists and Lonnie was no exception. Moody and meditative, though powerful and politically charged, I loved hearing his work for a second round.

I had to slip out of that one early, as well, which I didn’t like, but I had to get into the Bijou to hear Avishai Cohen (see if you can get “Alexa” to understand that musical request – I can’t). This was one of my favorite shows in a festival filled with great music. The Israeli trumpeter and band leader was recognized for his skills very early and, as a result, has had a long career even though he is very young.

His music has shifted as he’s gotten older and the death of his father led him into quieter waters. It’s remarkable to consider how a music born of African-Americans has taken such root world-wide and inspired people from the most diverse of cultures. It may be America’s best export. I lingered over every note of this show and hope to hear more.

After a break and some down time, I queued up for a spot in the Tennessee Theatre for what promised to be another great jazz show. Legendary drummer Jack DeJohnette who played on Miles Davis’ “Bitches Brew” and played with the fathers of current bandmates bassist Matt Garrison (son of bassist Jimmy Garrison) and saxophonist Ravi Coltrane (son of saxophonist John Coltrane).

The trio put on a phenomenal show which extended a bit beyond the earlier festival shows. DeJohnette took turns at the piano, but focused on the drums where he has influenced a generation of jazz drummers. The Tennessee Theatre was near capacity and the audience was riveted, with very few leaving at breaks as is the normal ebb and flow of festival shows. You can read an excellent piece about the group here.

Next up, for me, was Makaya McCraven at the Mill and Mine. I’ve run out of superlatives, but this show held up to anything I heard throughout the festival. McCraven is a drummer and band leader, but there was little to indicate that in the performance. The band played as a finely tuned group. The set list was heavy on their most recent album, “Universal Beings,” which has been lauded as one of jazz’ best recent releases.

I ended the night with something entirely different, choosing to hear White Gregg at Pilot Light, downtown’s scruffy little dive bar. White Gregg is a local band which has generated quite a buzz. They also take a buzz saw to their punk rock stylings with crunchy guitar, loads of feedback, screaming lyrics and sonic explosions. In other words, they were made for Big Ears. The local band did Knoxville proud with a packed house.

Sunday starts on the radio, for me, where I played a good amount of the music I’d loved from the weekend. After the show, I took my spot in line for Richard Thompson at the Bijou, playing with the Knoxville Symphony Orchestra strings. The first half of the show featured the reading and singing of letters from soldiers in World War I. Powerful and, as Thompson acknowledged, extremely depressing, it was none-the-less beautiful.

The second half of the two hour show featured Thompson’s more common material. He also did covers, such as the Rolling Stone’s “Out of Time,” after which the applause was so rapturous he deadpanned that perhaps he should have played all covers. It was a very good show from a legend.

Bill Frisell’s Harmony was a very lovely Sunday afternoon change-of-pace with Petra Haden singing a number of standards with backing by an all-star group. It was a bit of an odd pairing for the Mill and Mine, but the audience didn’t seem to mind standing and they kept the crowd to the end. The closing “We Shall Overcome,” in which the crowd was encouraged to sing, was moving.

Uncle Earl was up next on the stage. Based around old-time string music, the all-female group has been around sporadically and in various incarnations since about 2000. The current line-up convenes periodically as they each have busy solo careers. Abigail Washburn, though not an original member, now feels like a centerpiece of the group. Punch Brother Chris Eldridge joined the band for a song and the audience had a great time.

I slipped out just a few minutes before the end of the show to give The Standard another go with Sun of Goldfinger. When their sound check from the other side of the venue hurt my ears as people added earplugs, I changed direction and took a break to walk to the Tennessee Theatre.

The night and the festival ended with three major acts pitted against in each other. Choices had to be made. The Punch Brothers played The Mill and Mine, Harold Budd played the Bijou and the Art Ensemble of Chicago played the Tennessee Theatre. For me, the choice was easy. I’d been excited to hear the Art Ensemble of Chicago since they were announced.

They did not disappoint. A large ensemble, the group began with a skronky number that sounded as much like random tuning of all the instruments as a song. I thought I might be in for a head scratching show. There was more of that, as well as random vocalizing. But somewhere during the show, it all began to coalesce. Pieces began to connect and make more sense.

It was a perfect ending to a great festival. These four days are possibly my favorite four of the year and I’m so thrilled this festival makes its home in our city.

A final post-modern issue: What to do about the music I really liked? In a previous era I would have purchased the vinyl recording. I accumulated 4500 albums that way. Later, I would have bought the CDs. Now, I’ve reduced the vinyl to around 1500 essential albums and I’ve eliminated CDs.

In recent years I’ve come home from Big Ears and downloaded the music I loved. Now my ipod has stopped working and I can only listen to those downloaded songs (about 12,000 of them) on my computer. Additionally, I’ve finally gone to the dark side and gotten an Echodot, with plans to get nicer speakers. I’ve paid for Amazon Prime and Amazon Music. All weekend I said, “Alexa, play . . .” and she did.

So, I can listen to the artists via streaming services by just saying to the air in my home the name of the artist and/or album I want to hear. I’m sure some pennies get to the artists, but probably not much. That bothers me. Also, if the artist is on my itunes, I’ll eventually run into them again after I forget the lineup for this festival.

If I stream them for a while, they will fall off my radar and I’ll remember there was some Israeli trumpet player, but I won’t remember his name. The music I loved may be readily available, but essentially lost to me forever. So, what to do? I love music and I’ve always owned it. The current state of technology has me adrift while simultaneously awash in more music than I could have ever imaged having access to. Help me, I’m drowning.