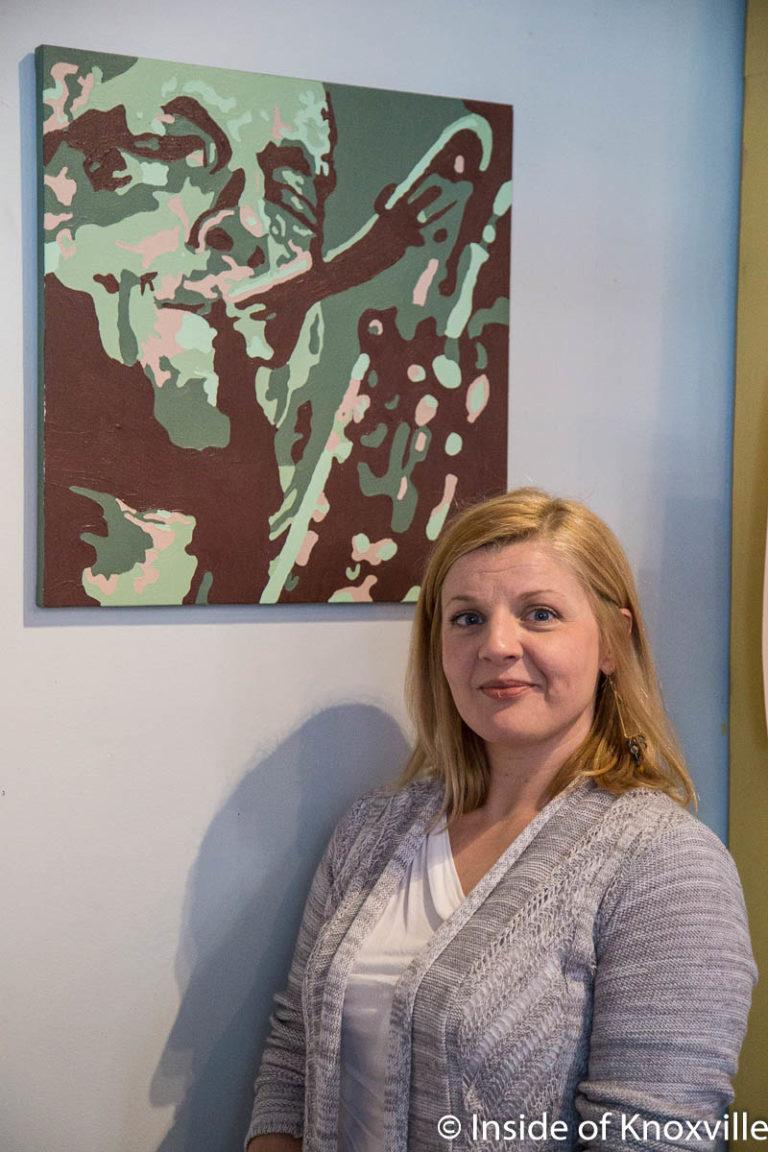 Area artists and others are responding to the all-encompassing presence of Big Ears in downtown Knoxville. Most notably, Funny Ears Fringe Festival has been running for several years, now, at Preservation Pub and Scruffy City Hall. But other artists not directly a part of the festival are also getting involved. Today we’ll look at Kara Lockmiller. Tomorrow I’ll feature another local artist you should know and his response to the festival.

Kara Lockmiller is an artist from the Knoxville area — she grew up in Strawberry Plains — who attended Catholic High School and UT. She initially majored in Forensic Anthropology, but but journalism ultimately won her heart. Though she’s still a wordsmith, the schedule of a news editor wasn’t conducive to motherhood. Kara is also the wife of a Knoxville Police Department sergeant.

“I always painted for myself, starting in elementary school.” As early as grade school she had her first work displayed in the World’s Fair Park. It was her mother-in-law, years later, who suggested she pursue her art in a more serious way. She loves music and, after attending Bonnaroo as a journalist, she painted a portrait of Bob Dylan. She’d “caught the passion,” of painting musicians.

She typically uses a photograph as a starting point, but diverges from a direct representation of the photograph. “I paint according to shadows. I look at the highlights and lowlights.” She also chooses colors for each portrait deliberately, based on their personalities or music — which she listens to as she paints them. She pointed to the gold in the Robert Plant portrait.  He’s known as the “Golden God.” She also mentioned the green in her portrait of Amy Winehouse, representing the money for which those around her used her.

Her style began to seriously emerge as she painted one of her first portraits of Dolly Parton. As she worked to blend the lines in her painting, as is the traditional approach, she realized she actually saw the lines when she looked at a face or photograph of a face and decided she would allow her work to retain the shadows, light and lines that she saw.

The epiphany was followed quickly by an online sale in which she was told she charged much to little for her work. It was the kind of encouragement she needed and she launched into painting musicians in her newly derived style. While her focus remains musicians, she has other work and, as an example said she’s working on a commissioned piece for a woman who wants her husband painted into a scene from the movie “Scarface.”

She’s a recent member at the Art Market and Gallery, Knoxville’s artist cooperative at 422 South Gay Street. It was her fellow artists there who suggested she use her artistic focus on musicians to do something related to Big Ears. For this reason, she has a solo exhibition of her work at Post Modern Spirits for the month of March. She also has works exhibited in the Art Market Gallery.

You’ll also have other opportunities to see her work coming up soon. She’ll have a solo exhibition at Awaken Coffee in the old City from May 20 to June 30, with an opening reception on June 7, First Friday. She’ll have a painting in Knox Pride’s 11th annual Art Out in the City Show and Auction June 14 from 6:00 PM – 9:00 PM at Jackson Terminal, and she’ll have an exhibition at Marble Alley Lofts in August.

You can access her work on her website and on Etsy. You can also chat with her this weekend as she’ll be available to discuss her artwork from 3:00 PM to 5:00 PM March 23 at the Art Market Gallery.