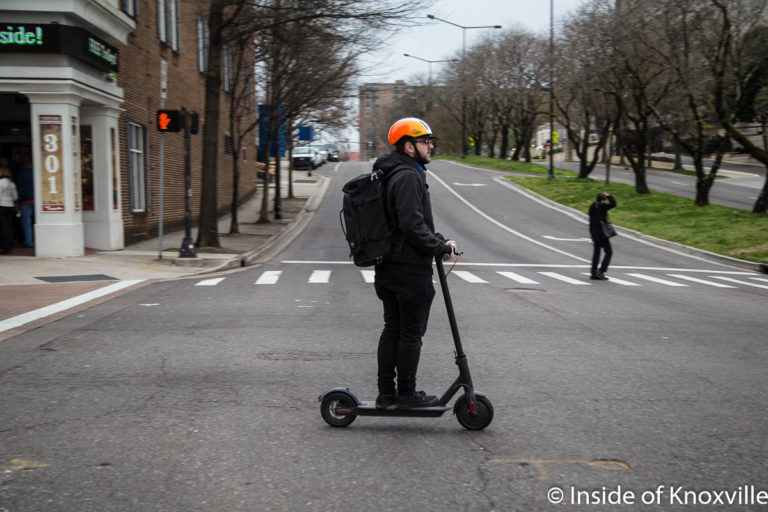 You may have noticed some new neighbors on the streets, yesterday, as electric scooters arrived in downtown in a big way. Two companies won the right to operate the vehicles in the city and Zagster, (they also operate the Pace Bike program locally) put their scooters out with the hopes of having them used during Big Ears. VeoRide will launch their version of the scooters soon and the eventual total will be around 500 available units in the downtown area.

The city had placed a moratorium on the devices while they studied what had worked in other cities and examined the problems presented, in order to avoid mistakes others had made when implementing the very popular program. Mayor Rogero said, “We have taken our time to learn from other cities and feel we have selected two companies that will be flexible and responsive to the needs of Knoxville.”

It’s important to note that the scooters are not allowed on sidewalks or greenways, but must be ridden on the streets, where they will be treated much like bicycles. They are also not allowed on Market Square or the Henley Bridge, though they can be ridden across the Gay Street Bridge to the south and to Happy Holler to the north, for example.

In theory, the Spin App, which provides a map of allowed areas, will provide a warning to the rider if the border is approaching and will slow to a stop. On the first day of the launch, that was a bit more theoretical, as the app was allowing riders to continue past the border at a slow speed. They were pulled until that can be corrected, so you may see them back already, or it may be a minute.

Additionally, according to the press release, “Riders must be 18 years of age, or 13-17 with adult permission and supervision. A valid identification indicating age will be required to rent a scooter.” The scooters can travel up to 15 miles per hour and they are available 7:00 AM to 9:00 PM daily. Rainy weather is a no-go and they will be pulled in that event.

Additionally, users are encouraged to park the devices upright and out-of-the-way, preferably “adjacent to Pace bike stations or public bicycle racks.” The companies will be collecting, recharging and restaging the vehicles. KPD will ticket anyone who misuses the vehicles.

Here are a few additional FAQs for questions not answered above:

How do I find a scooter?

The first thing you will want to do is to download the apps, Spin and VeoRide. When you have the app loaded with your credit card information, you will be ready to engage an electric scooter. The app will provide locations of scooters and the map where scooters are permitted.

How much are scooters to rent?

Approximately, $1.00 plus 15 cents a minute. So if you were to rent a scooter for one hour, the cost would be $10.00. The prices may vary with time and companies.

How old do I have to be to ride a scooter?

Eighteen (18) years of age; 13-17 with adult’s consent/identification. You must have a valid identification to rent a scooter.

What if I have problems with my scooter?

There is a customer service number on the scooter.

How do I report a complaint about a scooter?

If you need to make a complaint about a scooter, you can use the app or call the phone number on the scooter.

Can I be fined for using my scooter inappropriately?

Yes, you may be fined for leaving your scooter in a position that impedes pedestrian, bicycle, or motor vehicle traffic or other misuse. You may also be fined and ticketed for not complying with traffic rules and regulations.