Local Comedian, Shane Rhyne, To Record Live Comedy Album – And You Are Invited 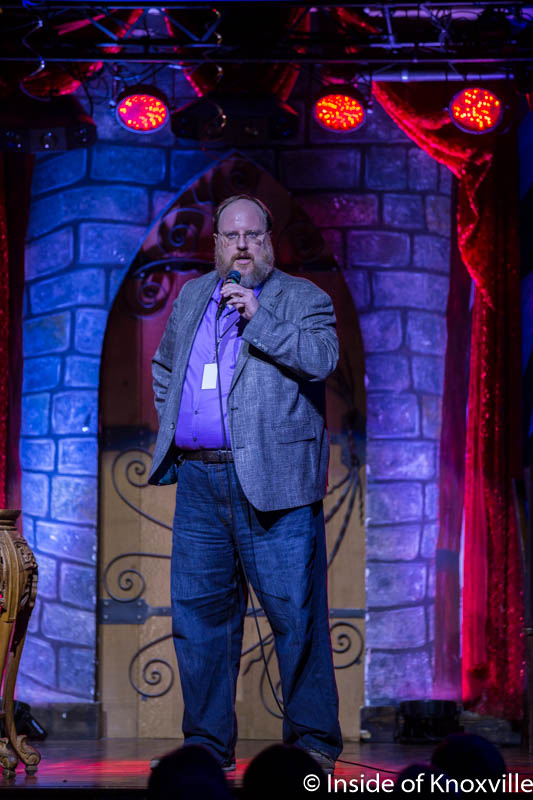 For people who have had anything more than a passing acquaintance with Knoxville’s comedy scene, there are things you know. Of Shane Rhyne, you know how important he has been in producing local shows and keeping the scene vibrant. You also know that he is funny and is getting ever better at his craft. Beyond all that, you know he is a great guy.

His debut recording, set for two shows this Saturday night at Pilot Light, will celebrate his fiftieth birthday, his first CD and five years in comedy. He first took to the stage five years ago after attending a show at Sidesplitters with friends Frank Murphy and Randall Brown. Generally when attending a comedy show one is either mortified at the thought of getting on the stage and trying to be funny – or you react like Shayne did: He figured he could get on the stage and be funny. He’s a funny guy, right? How hard could it be?

So, he did what he encourages any aspiring comedian to do: He found an open mic and scheduled himself. It makes a deadline. The night arrived at Preservation Pub for Matt Ward’s long-running open mic night and sitting in the booth awaiting his turn, threw away everything he’d prepared. He got on stage and faced his fears, doing what he’s done ever since, talking about what makes him most afraid. Five years ago it was divorce and other life changes. “If we can all laugh about it, it isn’t dangerous anymore.”

And a few people laughed that first night. He relaxed and realized it was something he enjoyed, which led to more open mics and, eventually, much more than that. And all the while, the downtown that was a large part of his personal story before he started doing comedy, became even more intertwined with his new venture.

Before I started performing comedy, downtown was already a big part of my personal story. I researched and designed the original Cradle of Country Music Walking Tour back in 1994 as an employee of the East Tennessee Historical Society. For six years, I served on the CBID’s marketing committee (including a stint as chair), where we worked in the 1990s to develop projects to bring people to downtown (which was quite a new idea at the time).

During this time I also served on various tourism-related committees with the old Knoxville Convention and Visitors Bureau.And, my favorite downtown job was my role as Santa Claus from 1998-2010 for the city’s Special Events office, where I had the pleasure of bringing Christmas to Knoxville’s children of all ages at Market Square, Krutch Park, and– for a few years– on Volunteer Landing.

Since that early performance in 2013, Shane has been an invited performer at comedy festivals across the country in locales such as Detroit and New Orleans, headlining shows in Atlanta, Nashville, Louisville, and Columbus, Ohio. He has opened for nationally-recognized touring comedians such as Emo Philips, Laurie Kilmartin, and SNL’s Jim Breuer.

“I’ve performed at the Bijou Theater in Knoxville, the legendary Star Bar in Atlanta, and a vacant lot in Jefferson County,” said Rhyne. “Every show has been an adventure.” In addition to performing on shows, Shane is a co-founder of RainShine Comedy, which has produced more than 100 comedy shows in Knoxville at various venues, including a two-night festival in 2017 to raise funds for the ACLU.

For me, there was no more appropriate option than to record my debut comedy album in downtown Knoxville. I first stepped on a comedy stage in December 2013 at Preservation Pub (I coincidentally attended a show and saw his act not much later) and my comedy career has revolved around various downtown venues ever since.

While the first jokes he made from the stage referenced the current state of his personal life, including his divorce, and his comedy continues to reference personal experiences, it has also served to further his personal life. “I opened for Jim Breuer at the historic Bijou Theater in 2017 and that’s the show where I met the woman who would become my wife in 2018 (we married a year to the day later on the sidewalk outside that theater).”

His take on the industry was different from the beginning. He says Matt Ward told him, “You are the only guy at the mic with a business plan.” As he’s woven his career over the last five years through standup and production, he’s always had that eye toward what the future might hold. “I’m trying to figure out where I go now,” he says, though noting that he’d like to develop opportunities to write for others. 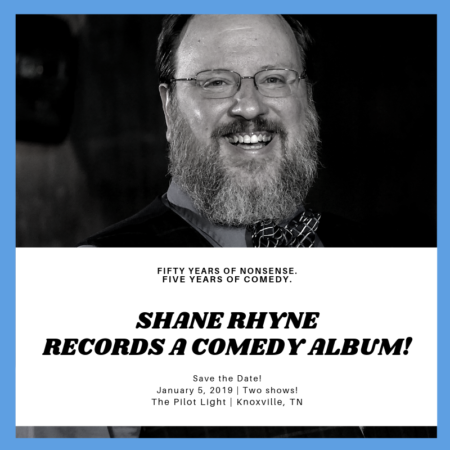 When he thought of recording an album to mark the first five years and to put something of a cap on the first five years of his comedy career, the choice of a venue was simple, “The Pilot Light in the Old City has served as a comedy home base for almost three years with weekly shows on Monday there.”

Advance tickets to the album recording are available here for $10-$20. Advance tickets include a free digital download of the album when it is released. Showtimes are 7:30 pm (SOLD OUT) and 9:30 pm on Saturday, January 5, at the Pilot Light, located in Knoxville’s historic Old City at 106 E. Jackson Avenue.

Additional information about the show and Shane’s comedy can be found on his website and on his Facebook page.