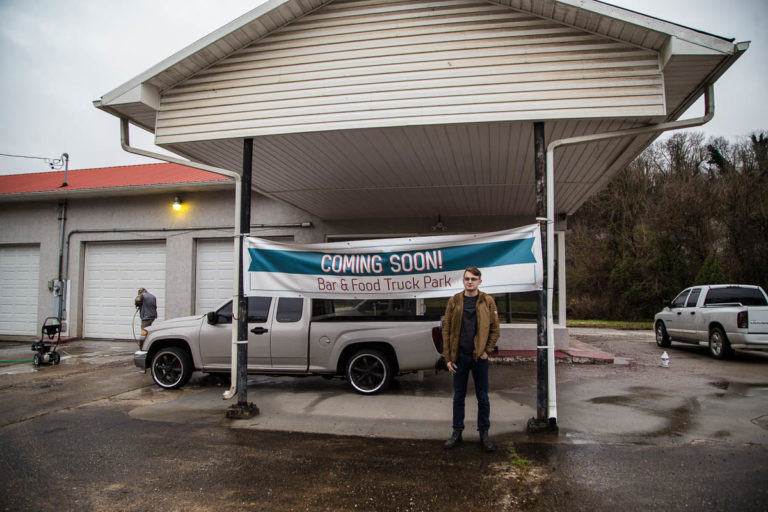 Two entrepreneurial old friends are turning their sights on south Knoxville with the planned opening of the Hard Knox Garage food truck park. David Yousif and James Tourville have leased a former garage at 1014 Sevier Avenue, with the intention opening a food truck park and bar. The two, even though young, are not strangers to the business world.

After attending Farragut schools, David started his own driving school business, while James attended UT, receiving his degree in business. After graduation, he opened LiterBoard a year-and-a-half ago and continues to operate it on Cumberland Avenue.

The two had been talking about the possibility of opening a food truck park. James lived downtown and then moved to south Knoxville, serving at SoKno Taco when they first opened, and the two liked the potential they saw along Sevier Avenue. James said he like both, “the vibe and the people.”

After looking around a bit, they landed at 1014 Sevier Avenue, a former garage with ample property in front and back, as well as a large interior space. Use of the former office space is still under discussion, but the two are thinking it may be a good space for vendors, such local artists and crafts people, as well as a spot to sell their own merchandise.

The adjacent interior space, with bay doors opening front, will house the bar offering eighteen taps, with one dedicated to kombucha. They plan to fill the other taps with high quality craft beers, including local and regional brews. In addition to the bar seating, high-top tables will also be available and this room will include at least one television. While they will start with beer, plans call for a full range of alcohol to be added later in the year.

The final interior space is the largest, with bay doors opening front and back. A small stage will be built in order to feature local live music as they are able to schedule it. Family-style seating will be included and the rear garage door will open onto an outdoor patio with picnic tables and a large greenspace for dogs.

The food trucks will park in the front and there will be room for and electrical hookups (no annoying generators needed) for three-to-four trucks. CJ Taco first opened in a tent outside Literboard and then moved into a truck, so you should expect them to be around, as well as others. While still navigating the various approvals, the owners plan to be open by March 1, if not before.

Hours are anticipated to be Tuesday through Sunday, year-round, from 11:00 AM to midnight. You can follow Hard Knox Garage on their Facebook page and webpage. They are currently accepting applications from food truck operators.