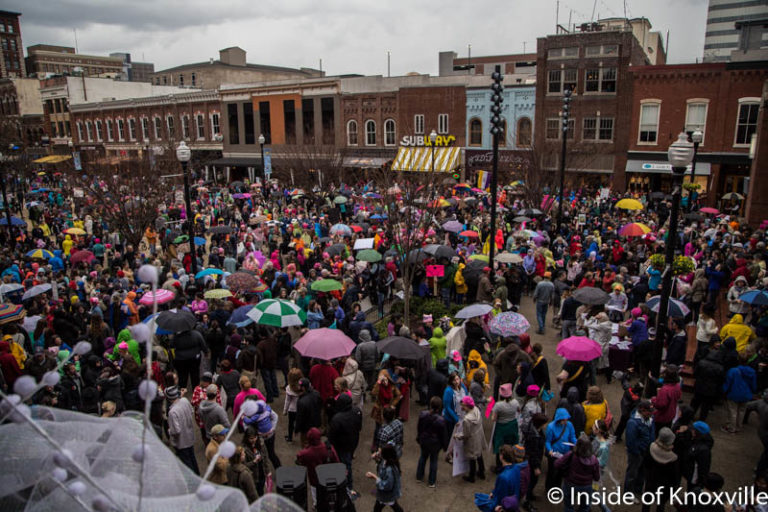 With the Friday inauguration of Donald Trump as our 45th president, reactions rippled from Washington, across the country and throughout the world. A Women’s March in Washington drew four chartered buses from Knoxville and others who found alternate transportation. Estimates of world-wide protests pretty consistently put the numbers at over a million. Billed as “women’s marches,” there was little doubt world-wide that the Trump presidency was the focus.

Locally, event organizers emphasized they wanted to support causes important to them and to do so in a positive manner. Thursday and Friday night saw a comedy festival, “What a Joke,” featuring comedians from across the region in a variety of local venues with all proceeds donated to the ACLU. Thursday night’s shows, scheduled in Pretentious Beer Company and the Pilot Light were well received and solidly attended. On Friday night the comedy shifted to venues in Happy Holler.

The event, however, that dominated the landscape was the Women’s March Knoxville. Organized in just a couple of weeks by women including Caroline Mann and Ellen Bebb, who had never organized a march before, evidence mounted online in the days and hours before the event that something big was happening.

Market Square started filling with women, along with men and children, well before the scheduled start. Rain threatened, but the crowds continued to swell. Estimates varied afterwards – I saw 2,000 to 5,000. Caroline told me that the 2,000 waivers they printed were all given out and women continued to arrive. That’s supports my guess, which was somewhere around 3,000, but it’s hard to know. It was the largest crowd I have seen in Knoxville for a protest or march in the 35 years I’ve been here.

As some of the signs pictured here suggest, the women arrived with a range of causes in mind, but health care, opposition to sexual aggression and human rights informed most of the posters. Some contained references to the president and his remarks over the last months. Many of the women wore “pussy hats,” pink, knitted hats with pointed ears.

The crowd was encouraged to get involved in politics with an emphasis on many strong women – some of whom were on stage – who have gone before them and with the idea that it is time for new women to pick up the torch. As the speakers addressed the crowd a light rain began to fall and fell steadily for the next hour which seemed to only enliven the crowd.

The march left Market Square toward Gay Street via Wall Avenue and then moved south and looped past the Duncan Building before moving back to Market Square. First on the west sidewalk of Gay Street, the crowd proved too large and half moved to the eastern sidewalk before the press pushed people into the street and the two sides merged. Police calmly encouraged people to return to sidewalks as they were able.

One of the certainties of the march, in my mind, was counter-demonstrators. If they materialized, I missed them. As would be expected in Knoxville, the march centered on the positive, on the future and on the work the women feel lies ahead.

I’ve dropped a few of the photographs here, but the full collection of 150+ is on the Inside of Knoxville Facebook Page, here. Later today I’ll have the full set of photos from the concert there, as well.