Details on the Broadway Viaduct Replacement 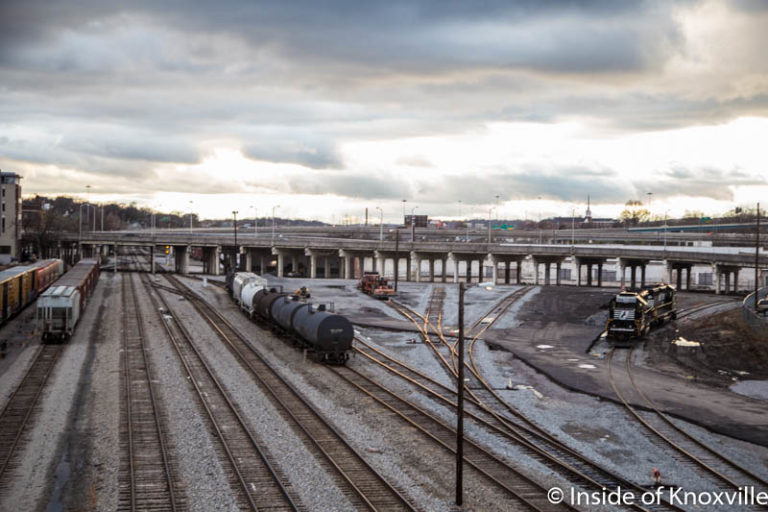 Representatives from TDOT held a community meeting yesterday afternoon to discuss the Broadway Viaduct in all its complexities. The upshot? It’s complex. The bottom line? It’s still a little squishy.

One of the complexities I would not have imagined is that the new bridge will need to be about four feet higher off the ground. The change will bring the bridge into compliance with modern standards for bridges spanning rail yards. The new construction requires that it meet the newer standards, while the older bridge was grandfathered. To accomplish this at the norther, trickier end, that spur of the rail line will be dropped a foot and a half. Other design changes will get the additional height and still allow the bridge to land where it needs to land.

The original design was also jettisoned as it would have required the relocation of Smith and Hammaker which is located just off the viaduct. Realizing that the cost of moving the business would be more than the entire cost of the replacement project, it was adapted to avoid the removal, though that constricted not only the area for placing the bridge, but it also removed a potential staging area for the project.

Additionally, the bridge currently carries both gas and electric lines which will have to be temporarily moved during demolition and construction. Further, the project will have extensive drainage issues which impacts all the businesses in the area and those issues had to be resolved. Finally, national requirements call for all needed properties to be secured before the advent of the project and that process is still underway, with hopes for a positive conclusion to those negotiations within the month.

There are also implications for many of us during the project which go beyond re-routing traffic. Parking beneath the Southeastern Glass Building will not be available while demolition and construction proceeds. In fact, the bridge is so close to that building that demolition will be an intricate process on that end. Access to the area for construction equipment and delivery and removal of construction materials also requires a pathway. That pathway will cut through the large parking lot on Jackson, removing some of the parking from that area before cutting through the McClung Warehouses site.

The timeline for the project is still fuzzy, but it sounds as if these final property negotiations will conclude within a month or so. Six months of utility removal will follow, during which the bridge will remain open. Asbestos removal from the bridge – I’m assuming the underside – will follow and estimates for that aren’t easy, but they hope it will take about a month, during which the bridge will continue to be open.

That puts us sometime around the end of this year or the beginning of next for the demolition. TDOT officials said the demolition will be a delicate process, because of the proximity to the Standard Glass Building, Smith and Hammaker and the rail yard. As a result, no explosives will be used. A flagman will be present at all times to give advanced warning of the approach of trains. It’s hard to imagine knocking a bridge down while ensuring that no debris lands on a track.

Once the actual demolition and construction start, a process they hope will be eighteen months, traffic will be re-routed and the site will have to be secured. They are aware of the numbers of homeless people who spend much of their time at the north end of the site and fencing will be installed with the intent of keeping the machinery secured. Depot will remain open at all times during the work, but some of the staging area for the construction will go beyond Depot, almost to the interstate.

Local traffic will still be able to use Gay Street to bypass the area and Depot and Jackson will not be closed for this project, though no one explained how this timing is going to dovetail with the replacement of the Jackson Avenue Viaduct. Through traffic will be routed out Summit Hill Drive to Hall of Fame and through to Broadway. Mention was made of the timing of the lights on those roads being an impediment to a smooth flow of traffic.

Questions were raised as to the possibility of working overnight in the manner that the most recent major Interstate project was handled in order to expedite completion. This is not a possibility according to TDOT because of noise concerns for nearby residents. Working in the dark on the rail lines would also seem to be problematic.

Once finished, the new bridge should have sidewalks, bike lanes, one lane for traffic each way and a middle turn lane which will run the length of the bridge in order to allow for left turns at each end of the bridge without  impeding the flow of traffic. Traffic flow over the bridge is currently less than 10,000 cars, though TDOT learned in previous studies that bike and pedestrian traffic is also significant.