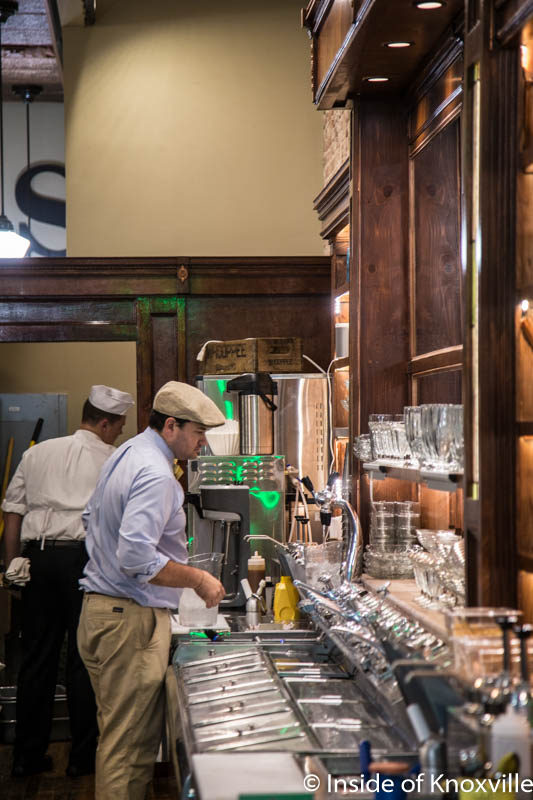 It was less than two weeks ago I wrote of the most recent plans for Baker Creek Bottoms. Tom Weiss one of the partners in the development said there would be a small commercial spot in addition to the larger restaurant/brewery and bicycle rental and repair shop, and hotel on the property. I’ve now learned the tenant who will occupy the small commercial space.

I met with Nolan Sherrill of The Phoenix Pharmacy and Fountain who told me of plans for a second, though very different, location in the spot. Developer Thomas Krajewski approached him about opening a shop there. He learned of the other plans, met Thomas and talked, looked at the site and realized he had a concept he felt would work in the location.

He’d spent some years in Colorado near recreational areas and had gathered some ideas there. He saw an opportunity to bring something new, not only to the project, but to the community and a chance to become part of the neighborhood. He points out that South-Doyle Middle is across the street and Phoenix Pharmacy has already partnered with schools and now can potentially be a part of this growing community.

You’ll see some connection to the original location in finishes, for example, but the The Phoenix Pharmacy Southside will not be linked to a time period like the Fountain location. The menu will have some overlap, but healthier options will be available, such as “non-dairy vegan frozen treats.” The food offerings will be light in nature and will not compete with the restaurant on the site. The new location will also feature a full line of coffee drinks, including espresso and cappuccino.

You will definitely be able to get the quality ice cream to which you’ve become accustomed to downtown, including banana splits and fudge sundaes. At the same time, you may find more experimental flavors like the rosemary honey fig ice cream they recently partnered with Beardsley Farm to produce. Emphasis will be on to-go orders with environmentally friendly containers.

They will continue to take advantage of their full commercial kitchen in the current location to make the ice cream. They will likely have a panini press and other small pieces of equipment for simple cooking at the new location. Another connection you’ll notice will be that they plan to have simple, over-the-counter medications for aches and pains active patrons might encounter.

The location will offer about 1300 square feet and will face Baker Creek Preserve. He describes the space as like a coffee shop in atmosphere. Though they will not have a roastery, they do plan to offer “an expansive coffee menu.” Other simple, healthy options might include avocado toast and more.

“The two things I’m looking for are local and exceptional and the marriage of the two is perfect.” The shop will be more a traditional scoop shop and will not have a soda fountain. You’ll find milkshakes, but you’ll also find healthy smothies. He mentioned how much he loves the fruits from Mountain Meadows Farm.

With an expected opening of late summer or early fall, he plans to operate year-round and sees the concept evolving as the hostel/boutique hotel comes online. Plans include engaging the greenspace conceptually and offering parties that include both the food and the recreational facilities just outside their door. In the end, he says, “It will be what it wants to be.”

He loves that the area is walkable, allowing it to be a part of the immediate neighborhood. He’s looking forward to special events for neighbors and he’s friends with the principal at nearby Mount Olive Elementary School and hopes to engage them.