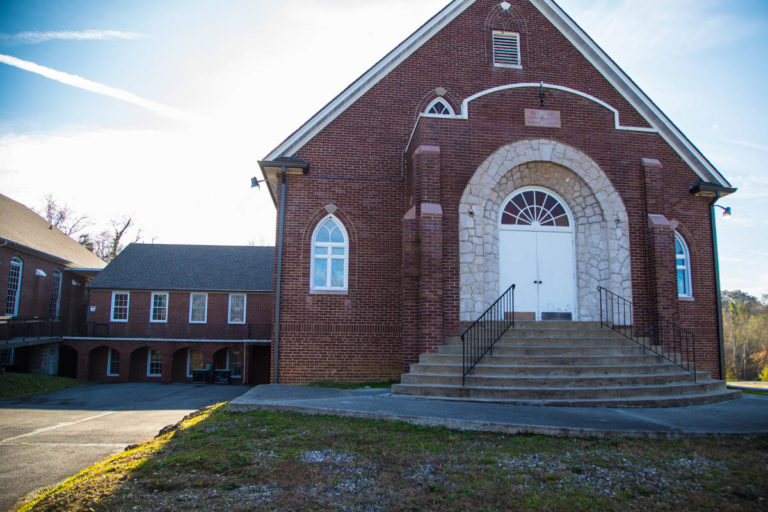 It’s another piece of evidence that the Urban Wilderness isn’t just a fanciful idea for a few cycling or trail running enthusiasts, but rather is an economic force that is growing south Knoxville. We’ve seen the impact in a number of ways, but the Baker Creek Bottoms project is perhaps the most directly related large-scale development to this point.

Located on Sevier Heights Road, it is just off of Sevierville Pike, more or less behind SoKno Taco and, importantly, it overlooks the Baker Creek Preserve and the entry point to the Urban Wilderness. Everyone entering the wilderness via the recently announced gateway at the end of James White Parkway will walk, run or bike past the new development.

Sevier Heights Baptist Church was previously located on the spot. The remaining buildings include a chapel, built in the 1930s as the original sanctuary, a more recent sanctuary built in 1952, a large gymnasium, a large building used for offices and classes and a much smaller parsonage.

The church moved to an Alcoa Highway location (now two locations) in the 1990s, leaving the buildings empty and without much in the way of prospects. Not much was happening in the community, beyond plans to cut a large highway through that would efficiently and quickly move people from Knoxville past this area. That, of course, was long before the idea of the Urban Wilderness.

Enter three developers with interesting backgrounds. Tom Weiss, who gave me a tour of the main building, also developed Highlands Row in Bearden and owned and operated The Grill at Highlands Row. Thomas Krajewski worked as Director of Outdoor Activity and then in the hospitality end at Blackberry Farm. Michael S. Wood, whose cousins donated the land for the Baker Creek Preserve has joined as a third partner. He is a realtor and friend of Tom’s, who first showed him the property.

They’ve owned the property for a couple of years as they’ve explored various possible businesses, as well as possible uses for the individual buildings. Tom said they were fielding offers from many directions and it became clear that, given the size of the project, a more particular focus was essential.

Current plans have changed in several ways from those originally announced, as tenants are lining up and best uses are coming together. They’ve also made the decision to phase-in the work, which will allow a better focus as they go and also will allow some of the project to open while the remainder continues construction. Sanders Pace has drawn plans and the general contractor for phase one will be Jenkins and Stiles. Cary Ratliff has also been involved.

The first phase will focus on the nearly 90-year-old chapel. It’s a much larger building than the word “chapel” might imply. A two floor structure, each floor contains 7,324 square feet in a “T” shape which includes a large space behind the gathering area of the chapel. The “T” was likely added later, but will be retained for this project. With a total of 14,648 square feet, the building will serve multiple purposes.

The city has awarded a Historic Preservation Grant for the building, which largely relates to the windows and doors, and Joseph Construction will be handling that. The main floor, which is entered through the stone archway in the front will be home to a brew pub. It will include a micro-brewery and a tap room. Additionally, the small balcony which extends from the left flank of the rear extension, will be expanded and the area to that side of the brew pub will be enclosed as a courtyard or beer garden with an arched entry-way.

Tenants for the brew-pub have been identified and an announcement should be made early next year. The remaining space at the lower level has been designated for two additional tenants, both of whom have also been identified. One portion will be dedicated to a combination ice cream and coffee shop, while another will be built-out as a bike rental shop.  All three businesses should have a large community appeal, as well as being perfect for the adventure travelers expected to utilize the new development.

Thomas Krajewski will own and operate the bike rental shop. He plans an interesting collaborative effort with existing local bike shops. Available bikes will be rental only of bikes owned by the various shops. The shops get exposure to a large market and the consumers have a range of brands to rent. The bikes will be serviced in the shop and service will be available to any cyclists using the trail.

Phase Two of the project involves the 20,000 square foot building directly behind the chapel. Plans now include to market it as a 100 bed boutique hotel, but with accommodations for all kinds of travelers. Regular hotel rooms will be included, but also rooms with a common bathroom and shared rooms with multiple beds like a European hostel. Included for hotel guests will be an adventure guide, of sorts, who will help the guests plan their various cycling, running or hiking expeditions.

Phase Three will focus on the former gymnasium. Plans call for covered parking for hotel guests on the lower level and a market place on the second floor. It is the largest of the buildings at over 24,000 square feet total. Though plans are more fluid for this phase, it is expected to involve food, entertainment and crafts.

Feeling a need for more green-space, the 1950s sanctuary will likely be demolished to make space for planting trees, while the other structure, a parsonage is still being discussed for possible use.

“We intend to honor south Knoxville with this project. It will be something that south Knoxville is proud of.” The intended opening date is Fall of 2019. Expect announcements on specific businesses for phase one to come soon.