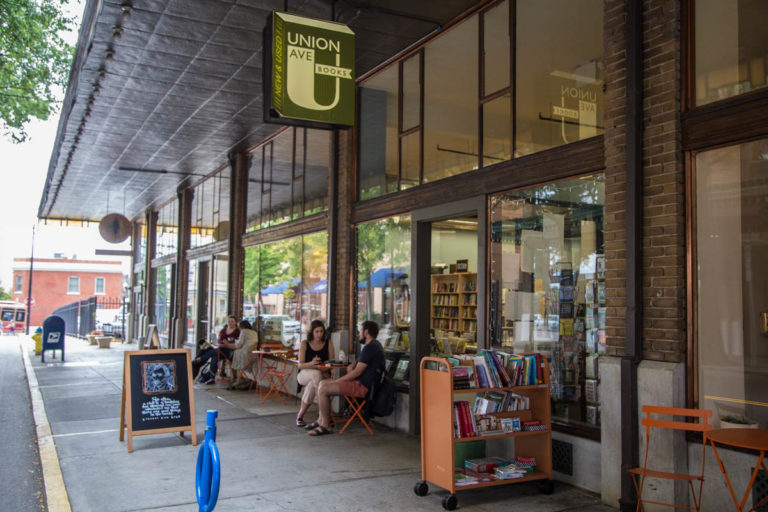 It was two months ago today that Union Avenue Books announced plans to expand their floor space by about fifty percent. The recently vacated storefront beside them offered the possibility of bumping up to around 2100 square feet. It was great news to learn that Knoxville has supported its independent book store enough to warrant expansion.

Now the plans have been realized and the change is wonderful though, oddly, it simply feels like it should have been this way from the beginning. An arch was built into the wall separating the two spaces, revealing that the two floors are not the same height, so there’s a little step down to watch.

The expansion allowed for multiple improvements and more may be yet to come. All interior books displays in the back half of the new side are portable, allowing them to be moved out of the way when special events such as author readings require space for a crowd. If you’ve been in the store during an event before the expansion, you’ll recall how crowded it was and how difficult to move around and to see.

Events now are much nicer, with plenty of space and a brand new set of folding chairs affording seating for significant numbers of patrons. It’s also a space available for book groups and others. This has allowed the book store to schedule more events than before and it will allow them to schedule authors who draw larger crowds.

Beyond the increased space for author events, the expansion has allowed room for the books to breathe. It’s simply a more pleasant experience to wander through the store with plenty of room to pass other patrons and easy access to the books. Additionally, some sections have been or will be expanded based on demand.

So, the already attractive little book store that could is just a little more attractive and a little less little. If you haven’t made it by there to check it out, please do so. It’s an important business in the heart of downtown. And while you are there, pick up a book, a gift, a calendar or something else and support our little (bigger) independent book store.