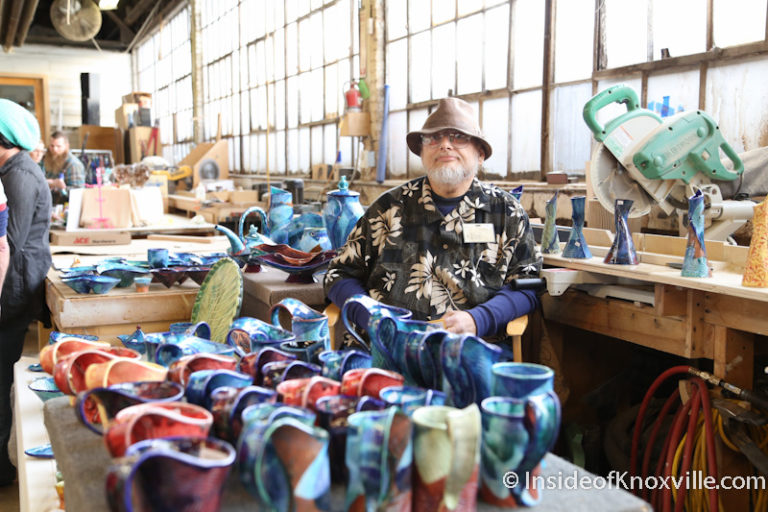 The artistic community in Knoxville, it can be argued, defines our uniqueness. Earlier this week I spotlighted a magical night with some of our finest musicians. Whether you explore local music, literary works, culinary arts, sculpture, painting or any other medium, you soon come to understand who we are just a bit more deeply. Name a small group like R.B. Morris, Cormac McCarthy, James Agee, Cynthia Markert, Beauford Delaney and Richard Jolley and consider how much Knoxville culture is embodied in that small list. A half dozen additional lists could be made, including many fine younger artists that make the same point.

When we lose one of these artists, we lose a piece of ourselves. We continue to grow, yes, but we’ll not be the same again when they are gone. It is with sadness that the Knoxville artistic community notes the passing of two important figures in that universe. One older who suffered through a fight with cancer and one younger who died unexpectedly. Bill Lee and Greg Tune will leave a void not only with their families and friends, but with our community.

Bill Lee dealt with challenges from childhood, but I don’t know if those challenges hindered him or gave him the very art which defined him. He had a mild form of autism which made early communication difficult and made the woods a much more comfortable place to be. A Virginia gentleman, he also spent time on the seashore and from that time on, he collected sea shells that. All of those forms of nature show up in his clay. He loved fishing and hiking all of his life especially with his son Jonathan. Bill could be fixated on the forms that he saw in a gurgling brook. Both of them were also sci-fi enthusiasts, loving otherworldly images.

Bill had a fine art degree from Virginia Tech in Blacksburg, VA, where he worked in sculpting, influenced by the work of Henry Moore and Constantin Brancusi. Bill had not yet thought about clay; he worked in stone and wood. He went for his Master’s degree at UT and that’s where he was introduced to clay.

Bill and his wife traveled to art shows and craft shows in many areas where he sold his clay and she sold her jewelry at retail. But in more recent years, Bill stocked several stores with his clay as travel became harder. You could have seen his clay at: Arrowcraft, or Cliffdwellers’ Gallery in Gatlinburg, Parkway Craft Center in Blowing Rock, NC, The Guild Gallery in Asheville, NC, Knoxville Soap and Candle in Knoxville, or his Etsy store online. Bill often did workshops where he taught his craft with stories and humor.

From autism to a story-teller! You came a long way Bill Lee Clay Artist! Bill left this earth on the first day of Autumn, Sept 22, 2018. We are having this fundraiser to benefit Bill’s family and keep his memory alive. Please take a piece of Bill’s clay to brighten your home and enjoy the work of Bill Lee Clay Artist.

I first met Bill in March 2014, appropriately, at a very cool event at Ironwood Studios. He was kind enough to let me take his photograph with his work. I became a fan of his beautiful pottery. A very special event will happen next week at Knoxville Soap Candle and Gifts. Starting Thursday, November 1 and running through Saturday, November 3. You’ll be able to select from probably the largest assemblage ever of his work, with the money going to his family, with twenty-six boxes of pottery sorted through for the sale. Money raised benefits the family, so come early for the complete selection, take a piece of Knoxville home and remember this Knoxville artist.

Death is rarely welcomed. For those who grow old, frail and sick, acceptance of the inevitable is, perhaps, attainable. For those who are young, vibrant, at the top of their career, giving to others and growing a family, death is a bitter ending to a seemingly unfairly abbreviated life. Such is the case with Greg Tune.

As you’ve wandered around the Rossini or Dogwood Arts Festival, you may have seen his quirky, whimsical art made from found metal pieces. Maybe you’ve encountered him through the classes he taught and the shop he operated at Knox Makers. He was an important part of that group. Perhaps you’ve seen the metal arch or other touches at Beaumont Elementary School. He was proud of that.

You may have read about him in my profile last July. I re-read that article after I heard he’d died. The article reported my interview ending somewhat abruptly as he said something – it was about helping others – and then turned back to his work. He had what he’d described as “a twitch in my eye,” while we’d talked looking at the work he’d left for our conversation. It was his love and it’s a damn shame to see it cut short.

There are two ways you can honor this Knoxville artist, gone too soon. Tonight a simple, non-religious memorial will be held at Knox Makers from 6:30 PM to 8:00 PM. You are welcome to attend. For those of us who didn’t know him as well, but would like to help his family, which includes his wife Hillary and three young children, a GoFundMe has been established with all the money going to the family. The goal is $15,000 to help them with expenses. This seems like too little to me. Please give generously and let’s honor his contribution to our community by giving his family a helping hand.

It’s a reminder to all of us to celebrate the life we have and to honor the artists among us, living and dead. They are an important part of who we are.