Crown and Goose to Close, Barley’s and Two Buildings Sold, and What Comes Next for the Old City 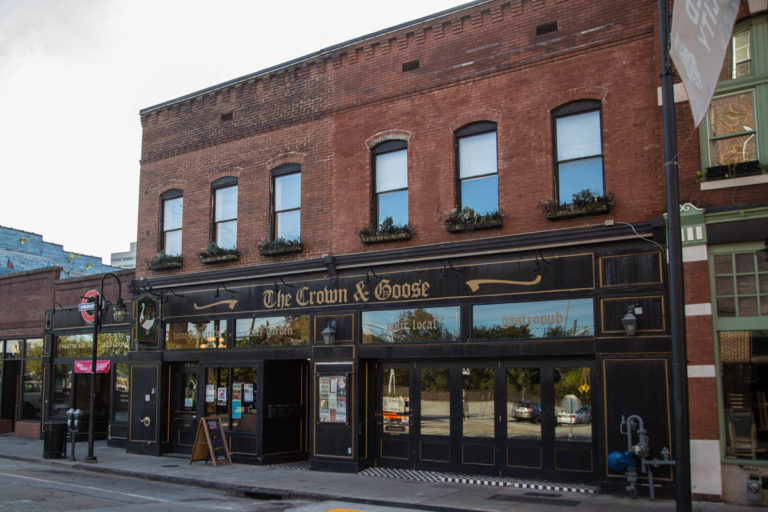 There are so many moving parts to this story it’s hard to get it all in a caption. Some parts of the above are connected, but not so other parts. It’s also part of a bigger move by Thomas and Harrison Boyd to expand their hospitality holdings.

The initial part of the story, the closing of the Crown and Goose has nothing to do with the rest of the story, with the exception that owner Randy Burleson, after making that decision, also decided to sell the building it inhabits. He bought it from Jeffrey Nash in January 2016. Perhaps not unrelated to the closing, popular chef Jeffrey DeAlejandro also left to start Oli Bea, leaving the restaurant without its original culinary vision.

While Crown and Goose has been an Old City anchor for many years, the same could also be said of Barley’s. It’s hard to imagine the music scene in the Old City without that anchor. Randy Burleson also owned Barley’s, which he opened in 2002, and kept open, it might be added, during some lean times in the Old City. With the closing of the Crown and Goose, he decided to sell both buildings and the Barley’s business to Thomas and Harrison Boyd.

Currently one or the other of the brothers owns all or part of Merchants of Beer, the building housing Good Golly Tamale, the building housing Corks Wine and Spirits, Old City Wine Bar and Rebel Kitchen and Old City Athletic Club. This acquisition expands that list to include Barley’s, potential new businesses in the Crown and Goose location and they have plans for an expansion at Merchants of Beer.

Of Barley’s, Thomas said, “Somehow I’ve avoided two things I love; pizza and music. I’ve always been interested in Barley’s. I love it and want it to stay as it is.” Like any new owner, he has ideas of ways the business may be improved “around the edges.”

The building housing Crown and Goose is another matter. It’s a large space and Thomas envisions the possibility of having it divided into more than one business. He’s already been in contact with parties who’ve expressed an interest.

The two are bullish on the prospects of the Old City, pointing out the pending completion of the Crozier, bringing more residents and retail just across Jackson from the Crown and Goose building. Rebel Kitchen opened recently and Kefi is set to open to the public next week, so the momentum seems to be there.

In a bonus, unrelated to the story, but related to the Boyd’s and Merchants of Beer, plans are underway for an outdoor area taking about 7,000 square feet of the parking lot. The business is co-owned with Bobby McCarter, while the property is owned by the Boyd’s. The outdoor space will include various games, seating and picnic tables.

They have also purchased a food truck you may have noticed sitting in the parking lot recently. It will be used for a pop-up dining experience, giving a rotating list of chefs a shot at trying out their concept behind Merchant’s of Beer. Thomas said they’ll be attuned to who does well and the possibility exists of collaborating with them for a brick and mortar venture.

In short, he said they want to help preserve the Old City while helping maintain the momentum it has accumulated in recent months and years. He hopes to have new tenants in the Crown and Goose space in the short term, while the outdoor space at Merchants of Beer may come a bit later.