Can Opera Be Funny? Can It Even Make Fun of Itself? Check Out These Performances! 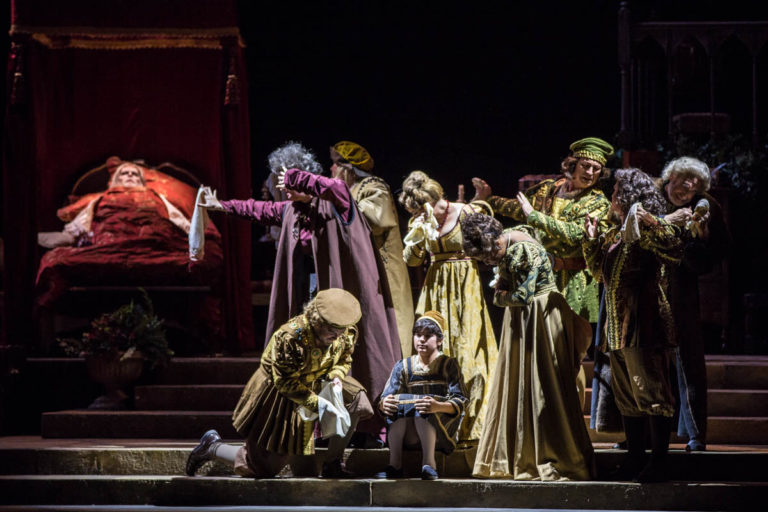 Knoxville Opera presents a double bill tonight and Sunday at the Tennessee Theatre and the fare is anything but stilted. If you haven’t experienced opera, this would be a good place to start. If you enjoy opera, but think it sometimes takes itself a bit too seriously, this is your night. The Impressario is presented along with Gianni Schicchi in a double-header with an intermission.

You might wonder who would have the nerve to poke fun at opera? Isn’t it sort of a sacred cow and isn’t making fun of it reserved for dullards who don’t “get it?” As it turns out, the person willing to take it on is one Wolfgang Amadeus Mozart. Written on command for a private luncheon for Holy Roman Emperor Joseph II, Mozart called it a “comedy with music.”

The Impressario is producing an opera and has an inflated sense of his own importance. The audition for the lead in the opera being produced turns into a vocal dual between two divas who sing ever higher notes. It also contains a couple of very beautiful arias.

The production includes a larger-than-usual amount of spoken dialogue, which is in English. Contemporary performances of the opera often include major re-writing to make the dialogue relate to contemporary culture. Such is the case in this production, in which much of the dialogue was written by Executive and Artistic Director Brian Salesky. It draws liberally on local references including UT and featuring cameos by well-known local guests.

In a clever twist, the re-writing of the dialogue in The Impressario, includes the audition for Puccini’s Gianni Schicchi, which just happens to be the opera that follows. The divas fighting in the first opera appear in the roles they won as they battled for the premier roles.

Referencing a small snippet of a story in Dante’s Inferno, and expanding it, a family is gathered around their dying patriarch. The setting is 1299 Florence and a vast fortune will soon be distributed. The family’s apparent mourning is soon exposed as greed as they search for a will.

The will, once found, leaves everything to charity. The greedy family consults an attorney who is from the common classes to help them circumvent the will. He agrees to pose as the, now dead, patriarch and dictate a will to unsuspecting officials. He helps the family, but helps himself more as he “leaves” large pieces of the family fortune to himself.

The two operas pair well together and with their slim running times offer a perfectly fun night at the opera. Leave your expectations at the door and have a good time. The music, as always is superb, from the Knoxville Symphony Orchestra to the individual performers. Brian Deedrick is stage director and major roles include Sean Anderson as the Impressario and other roles, Kirk Dougherty as Cristoforo Cannelloni and Rinuccio, Brandie Sutton as herself and Lauretta, Brittany Robinson as herself and Nella and Scott Bearden as Gianni Schicchi. You can see full performer listings and bios here.