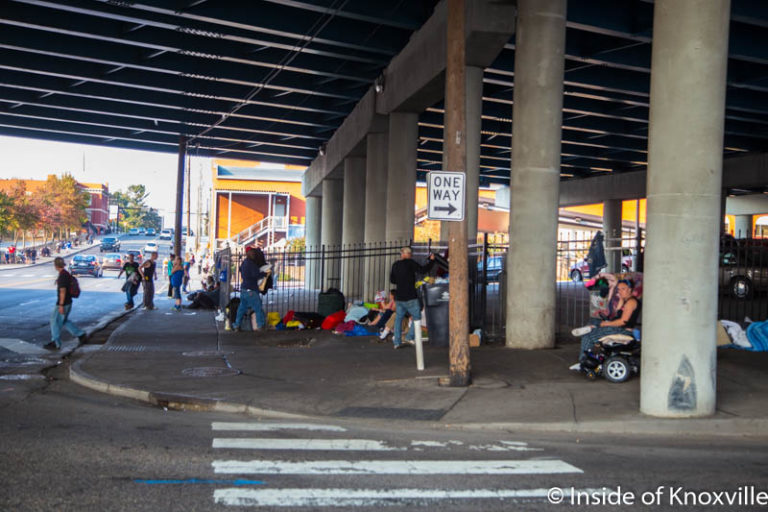 It’s one of the most talked about areas downtown: the gathering of the homeless population under the viaduct on Broadway. Some people are afraid to walk through the people sleeping or sitting on the sidewalk. The smell of human waste is strong. Often, sounds of angry screaming or cursing echo under the interstate.

Some are afraid to drive through the area – either because they fear the people collected there or because they fear inadvertently killing someone who mindlessly or intentionally walks into traffic. Any way you spin it, it’s an unhealthy situation for everyone involved.

While many are sympathetic for the plight of those who find themselves seeking shelter there during the day, the reality is that more than the homeless gather under that shelter. I spoke to Michael Dunthorn who echoed comments I’d heard previously from Chris Martin, former head of the Alliance for Better Non-Profits and from Bruce Spangler of Volunteer Ministries: Not everyone under the bridge is homeless. Some are simply there to victimize the homeless. It’s complicated.

So there are many problems which are interconnected and on display in this one small spot downtown: Safety, both for the homeless as well as for those passing through, sanitation and the need for shelter for people without permanent housing. And that is the problem at its root: housing. People need shelter to be their healthiest and some people are unable to maintain it without help.

It is into this multi-faceted breech that the city steps as it attempts to formalize and control a situation which has been informal and often out of control. It’s a daunting task for which the city has devised a multi-prong approach.

The first step, as you might have noticed, is to tell people they cannot obstruct the sidewalk and that they’ll need to be elsewhere during construction of a day space under the viaduct. The impact of the $500,000 the city has committed to the situation will be evident within the next few days. Paving of the area and construction of a fence around the area to the west of Broadway is set to begin this week.

Once the gravel is replaced with a smooth surface, picnic tables and other seating will be added, along with portable toilets which the city will maintain. With a sheltered place to rest and provision for sanitation, the city-hired security company will open the gates each morning and lock them each night. City Public Service crews will clean it each night, preventing the trash buildup we’ve become accustomed to in the area.

The city has coordinated with local service providers to inform those under the viaduct that they would be temporarily displaced and has worked to get them sheltered, should they agree. According to KARM, there are enough beds to house anyone who wants to come inside.

Perhaps more important than the physical changes under the viaduct, a large share of the money will go toward hiring two social workers who will be on site every day, along with security guards whose job it will be simply to keep order. The social workers, hired by Volunteer Ministries, will, “reach out to chronically homeless people who have been resistant to receiving services.” An additional social worker will focus completely on, “outreach to prostitutes, aiming to divert them from the streets by connecting them with social services and access to permanent housing.”

I spoke to Michael Dunthorn, the City of Knoxville Homeless Program Coordinator, who said, “Already, as a part of this process, a number have come inside at KARM and Volunteer Ministries and that’s really what we want.” He also said he expects the project to be completed in two-to-three weeks.

He and others with the city have repeatedly made the point that they have no interest in criminalizing homelessness. Of the sidewalk obstruction we’ve seen, he makes the point that if you want people off the sidewalk, you have to offer an alternative and that’s what the new area will be. Still, he was clear, “The objective is get people into more permanent housing.”

“We will be respectful and compassionate, but we want them to deal with the reasons for their homelessness. We’re hoping to change the dynamic. We are also separating people who are desperate and need help from those who want to victimize. We want to help people get off the street.”

Knoxville is filled with compassionate people who want to help with warm clothing, food and more and every city and agency representative to whom I have spoken has emphasized that the best way to help is to go through the agencies that have the greatest understanding of the problem, the dynamics and the population. Both KARM and Volunteer Ministries are great places to start.