The Regas Building: Its Past and What’s Happening There Today 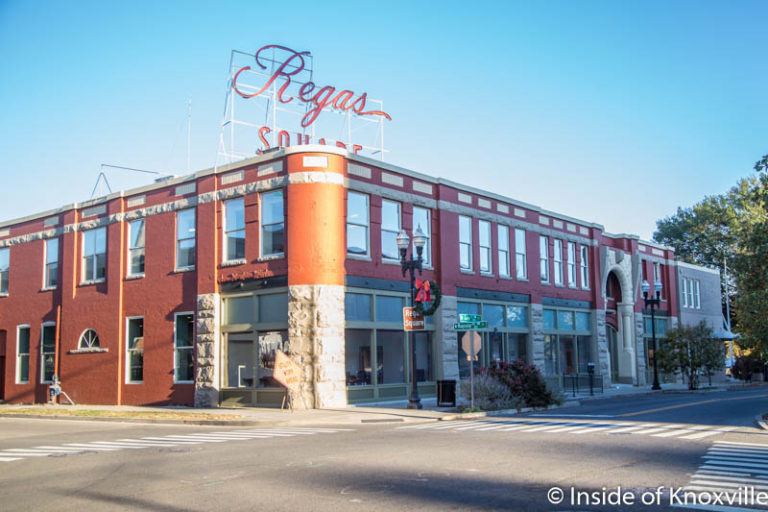 We call it the “Regas” building because it was Regas restaurant for as long as any of us remember, but it wasn’t always known by that name and it once looked quite different than it does today. Located at the corner of Gay and Magnolia, many of us remember celebrating occasions or taking guests to the city to the restaurant. A number among us remember the business lunches where decisions big and small were made about a range of happenings in the city.

The building currently has mounted historic photographs paired with narratives by Jack Neely detailing its history posted in the lower hallway. Built in 1891, the building was originally known as the Caswell Harris Building for the two men who appear to have been partners in its construction. Harris had his dental practice there in the 1890s. A number of businesses used the building before it became the Watauga Hotel in the early 1900s.

In 1919 the Regas brothers opened a restaurant on Gay which they moved to the hotel in 1922 where it changed names from the Ocean Cafe to the Astor Cafe and later to “Regas Brothers.” It evolved through the 1930s, eventually becoming the fine dining restaurant we remember, before closing in 2010. As you can see in the photograph, it lost a few stories along the way. The Regas family had those stories removed, feeling they were beyond use.

I sat down for a conversation with Chris Martin, President of both the K.L.F. and the Alliance for Better NonProfits which is also housed in the building. He told me they were looking for a home and wanted more space, but when he found the building and decided to purchase it, the idea of how it might be used was not fully formed, but has evolved. The moved into the downstairs in November 2015 and into the upstairs in May 2016.

Chris and his wife have lived and raised their children in the Mechanicsville neighborhood for the last thirty years. He started K.L.F. out of his garage with the simple idea of finding the greatest needs and connecting those needs to the resources required to meet them, starting with his own neighborhood.

That simple beginning grew into offices at the Fort Hill Building where they stayed for twenty years until the move to the Regas Building. They’ve launched twenty-three inititiatives over the last twenty years related to topics such as affordable housing, youth and chronic homelessness. The Mechanicsville Medical Clinic was an early effort which was subsequently taken over by Cherokee Health System. They developed and built both Minvilla and Flenniken for housing the chronically homeless and they still operate Flenniken.

Mr. Martin said the K.L.F. follows one of three approaches in their work: For some inititiatives, they will develop, run and continue to own it. They also collaborate with other organizations in a shared effort. Finally, they consult with organizations to help them do what they do, better. An outgrowth of the interest in helping other non-profits was the idea of forming a Center for Communities which is a growing national trend with many cities and non-profits forming Non-Profit Resource Centers of some sort. The Center for Communities became the Alliance for Better NonProfits which is a separate organization housed in the Regas Building. Chris is currently President of it, as well, but it will become completely independent of the K.L.F. He noted that, “while we are very rooted and connected to our faith, we believe we should work with all people of good intent.”

The Alliance for Better NonProfits is also different from the K.L.F. in coverage area, focusing on the entire east Tennessee area. The focus is, as the name would suggest, to help non-profits do their mission in a better way to make them stronger. They are one of a number of non-profits housed in the Regas Building, with the others representing the broad range of such organizations, from faith-based to secular, though most have an urban focus.

They’ve also opened a restaurant for breakfast and lunch, called The Gathering Place. A logical component, given the building’s history and the fact that it has a massive grease interceptor, they will likely look for someone to run it in the future. It offers a nice space for catered luncheons and is frequently used for that, for a single event or in support of conferences held in the facility.

The building includes roughly 26K square feet and has state-of-the art, various-sized, meeting rooms with the latest technology and flexible seating and tables. In addition to the roughly seventy people who work in the building, another twelve to fifteen hundred have been using it each month. From board meetings in rooms designed for a dozen to fourteen, to eighty people in the largest room, facility is quite flexible.

The building itself is also a testament to endurance and great craftsmanship. The arches, both on the facade of the building and internally were either predominantly or completely hidden and are now beautifully exposed. Even though the building lost its top three stories, it is more attractive now than it has been in many years. The heart pine in the beautiful tables shown above were constructed with heart pine harvested from the floor joists and built by John McGilvray.

Side Note: I hope each of you had a meaningful Thanksgiving. Couple of things about this weekend: If you are going to spend money, please spend some (or all) on local, small businesses. They need your support and this season could be the difference in having them to shop from next season – or not. Also, please join me at 10:00 AM Sunday morning on WUTK, 90.3 FM for another installment of Knoxcentric: Powered by Inside of Knoxville, when my guest will be Vance Thompson of the Knoxville Jazz Orchestra. You can hear the live stream here, and listen to the podcasts of previous shows here.