Bird on the Wire Studio: A Look Inside a True Maker Space 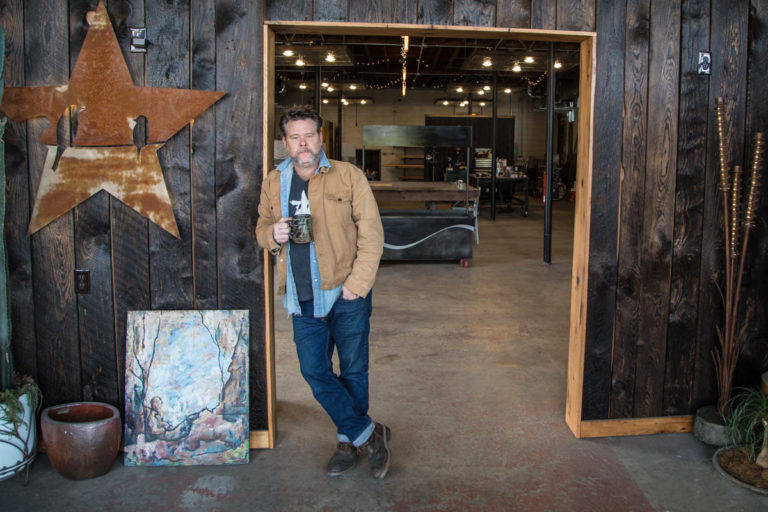 Derek White welcomed me into his Bird on the Wire studio at 1300 McCalla Avenue for our long-delayed conversation. He apologized for not having the work area in perfect shape, which came as a surprise to me, given that it was impeccable in every direction, giving very little indication that this is the spot where metal is pounded, welded and shaped to make many of the objects you’ve probably seen in businesses around town.

Derek is so integrated into Knoxville’s various Maker and artistic communities that I assumed he was either from here or had been around here a long time. It turns out, he’s from Demopolis, Alabama and grew up in Birmingham. His father, Tommy Joe White, was a chemistry professor who turned professional musician. His mother, Ellen Hitchcock and step-father Dr. Whitey Hitchcock live in Knoxville. Whitey is a former Anderson County Commissioner and you may know him as the “mushroom man,” at the farmers’ market.

Derek attended the Alabama School of Fine Arts and Homewood High School before following his father to New York City. While there he skipped eleventh grade, graduated from high school and hung around musicians like Steve Goodman, Larry Campbell and Kinky Friedman. After graduation, he moved back to Birmingham, had a son and got married for the first time.

He worked for five years with a geological consulting firm, all the while, loving reading, dance and writing. When the company closed, the president helped him set up an import/export business called Culture Importers, importing artisan products — and eventually silver jewelry — from Mexico. His mother-in-law was from central Mexico and he spent some time there as part of his work. NAFTA signaled the beginning of the end of the business.

He returned to Birmingham, divorced, remarried and had a daughter. He worked car sales while continuing to do art of various sorts, including everything from glassblowing and painting to ceramics, or “anything I could to be in a creative mode.” He also worked with natural materials he found in the woods, loving the idea that he made the art, but it would eventually deteriorate and disappear.

He became service manager at the dealership and enjoyed working with people there. Always harboring an entrepreneurial streak, he started a company called Safe Kids and sold it to a Texas Company. The model involved an 800 number where people could call to report teenagers who were driving poorly to their parents via the company. He said as often as not people called to report good behavior.

He worked designing logos and branding with a company called Branded before going out on his own to do similar work with Invision Enterprises. They did everything from Tshirts to billboards. They bought a silk screen business and opened a women’s clothing boutique. The company is still going, but he pulled out.

He left for California where he attended seminary. “As I gained knowledge, I became disenchanted.” Back in Birmigham, he worked as a youth pastor and once more took control of the clothing boutique, Gaddy’s. He grew it to four locations. He continued branding on the side, began designing and building water features, sold the boutiques and left the ministry.

In 2012 he moved to Knoxville, joining his family here. Their roots had grown deep in east Tennessee after moving here in the 80s. His mother is a well-respected therapist and his step-father was the conditioning coach under Pat Summit. He attended Pellissippi to study math, but was drawn to photography. He began selling hand-made soap at the Market Square Farmers’ Market.

He worked with Claude Hardy building sets at Pellissippi State. He got work building sets for the Black Lilies, the Biscuit Festival and Rhythm n Blooms and had an epiphany that he really wanted to be a full-time artists. He said he realized, “If that’s what I want to be, I have to call myself that and begin to work.”

He focused on metal work and began Bird on the Wire from his home. He sold metal work at the market and he counts it as a turning point when Sarah Brobst invited him to be the featured artist at Ijam’s Symphony in the Park. He says it “blew up” from there. He later did the work for their entry way.

He built the VIP arch entryway you may remember from Rhythm n Blooms and that led to work with Sugarlands Distilling Company. He larger sculptures and installations at Navitat and the mirrored sculptures on Hill Avenue.  He built the chandelier, fire pit and more at Elkmont Exchange. He said they showed him what they were doing and gave him freedom. He moved his shop to Depot Avenue and began working with the Maker’s Group.

“I began to get a heart for people like me, for teaching people how to make a living doing what you love.”He began calling the owner of the building which used to house Mighty Mud to see if he would sell. “I called him every two-to-three weeks for two years.” When Barron Hall moved Mighty Mud to their new location, the owner relented and in August of 2017, Derek came into possession of the building that is now his studio.

“I wanted to move into an area that had the potential to be great and help it become great.” He has continued to improve the building and most recently, that meant transforming the facade. The city awarded a facade grant, he designed it, had Forrest Kirkpatrick translate it into blueprint form and set out to make the exterior much more attractive.

He’s added new doors, landscaping and a lot more. He doesn’t believe in debt, so he’s growing the business organically, putting the profits back in until he gets it set up the way he wants it. He points out that he’s gotten great support from his competitors. “We have a community above competition. My competitors are my friends and we share ideas.” As an example he points out that on the day to move his studio, a dozen people showed up to help and ten of them were his competitors. He mentioned, particularly, the support he’s gotten from Preston Farabow.

The company name is after the Leonard Cohen song which Derek describes as being “about freedom, past mistakes, but self-redemption. It spoke volumes to me about being able to be an artist despite past mistakes. People have opened up for me to witness my own becoming.”

“I didn’t just want to be in business, but I wanted to be an artist. I truly believe it is because of Knoxville, the array of people, the lack of elitism, that I’ve been able to do that. They offered me a door and I stepped through my open door and was embraced. This is an incredible place.”

You can find him on Facebook and on the main webpage. Check out his excellent work.