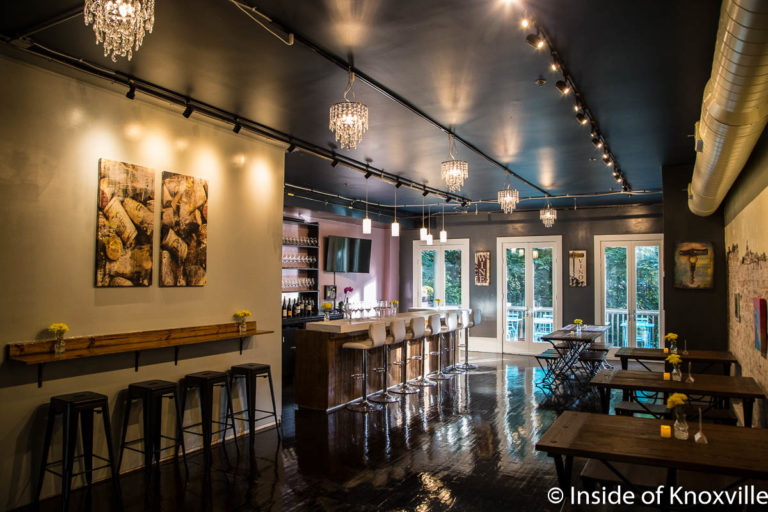 The Double S Wine Bar is on the verge of opening at 129 South Gay Street. The timing of a final permit will determine if the opening is this weekend or sometime next week. The space is beautiful, the wines will arrive as soon as the permit gives the green light and the 100 block of Gay Street will have an interesting new addition.

I spoke with Steven Sansone about his road to a wine bar on the 100 block. It started in Houston where he’s from, but his childhood was divided between his father in Texas and his mother in California. After high school, joined the Marines and served in both Afghanistan and Iraq. It was in Hawaii, however, that he fell for a woman who was very into wine. It was love at first sight – for the wine.

He began to study wines and he read magazines like Wine Specator. He attended seminars and learned under six master sommeliers in southern California. At the time, it was the only program in the U.S. backed by the Court of Master Sommeliers. He passed his level one and two exam.

He worked a harvest at Cakebread Cellars. It was an important experience, he says, as he was able to experience the entire process, from harvest to bottling. He traveled to New Zealand to do the same and to learn about the wine culture there.

Upon his return to the U.S., he began work at the Cosentino Winery in Napa Valley. He’d worked his way up to Tasting Room Manager by the time the winery was purchased. The new owners had him stay on as a manager, but when Mitch Cosentino left to start a new venture, Pure Cru Winery, he followed and became a manager there. It eventually opened a tasting room and wine bar, which he managed. It was rated, “Best Place to Taste Wine,” in downtown Napa by Napa Life Magazine.

I asked, given that evolution how he wound up here. Again, it involved a woman. While in California, he met a woman who decided to move to east Tennessee. He followed and they moved to Kingston, though he says they have plans to move to downtown Knoxville by the end of this year. He says he fell in love with the area and the warmth of the people here as soon as he got off the plane. He says Knoxville reminds him of Napa, but with a lot more going on.

They moved in December of last year and he arrived without a job. He started making plans to open a wine bar. He’d visited before and when he drove down south Gay, he fell in love with it. He felt an arts district would be the perfect place for a wine bar. As an aside, he noted that he loves to Tango. He traveled through Argentina wine tasting and perfecting his Tango and he hopes to bring some of that to the bar.

Once inside the beautiful space, pay attention to the details. He made most of them, doing the construction himself. He poured the concrete for the bar (which was harder than he expected) and built the bar and the back bar. He put up the doors, painted, lighted the wine racks and chipped the plaster off the walls to expose as much brick as possible (also harder than expected). All the interior design is also his.

The winery will focus on domestic wines from the west coast, including Napa and Sonoma. He’ll have wines from Washington and Oregon, as well as California. He wants to showcase boutique wineries and tell their stories. He feels west coast vintners are able to be more creative given the smaller government intrusion compared to a country like France where wines are very strongly regulated. The result is a wide range of treatments of the same varietals.

He’ll offer a small menu, as well, with cheese and charcuterie boards and desserts. Several desserts will be offered, including Mochi Ice Cream. In addition to a wide range of varietals of wine, he’ll have eight rotating craft beers including some from the west coast and some from Tennessee.

The focus, however will remain singular. He’s looking for value wines, great wines at reasonable prices. He’ll also offer some expensive wines by the glass so people who might not want to pay a hundred dollars or more for a bottle, might have a try for the cost of a glass. He allowed me a sample, for example, of a 2001 Consentino Estate Cabernet Sauvignon which will sell for around $25 a glass. (As much as my limited palate could appreciate it, it was delicious.)

Come check out the space. The floors and walls are beautiful, and we’ve got a few chandeliers to replace the ones we lost down the street. There is seating for around 40 and seating on a rear balcony which overlooks a small urban greenspace and a courtyard.

While there is one television, it will be muted and will likely be showing classic movies like Cassablanca or some from the Rat Pack. He hopes to host a range of events – including Tango – and he wants to include music. Acoustic music or soft jazz are the most likely candidates. He also has plans to host a party for downtown industry workers.

He signed the lease on the space in April, took two months to get the plans approved, started construction in June and hopes to open this weekend, though it may be next week. Initial hours will be 5:00 PM – 10:00 PM Tuesday through Thursday, 5:00 PM – Midnight Friday and Saturday and Noon to 7:00 PM on Sunday. They will be closed on Mondays. Give them a “like” on Facebook and follow their updates there.