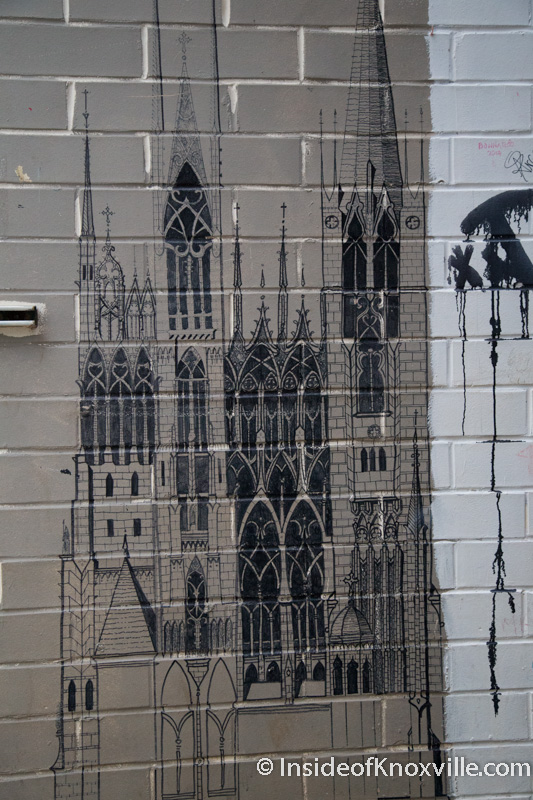 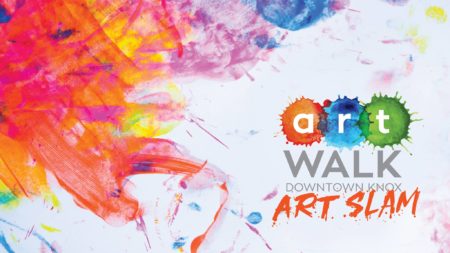 We’ve all experienced it, perhaps most often in an urban setting. Take a scruffy warehouse, add lights and art and suddenly, the space is “cool.” It’s a place people want to hang out. Same with an alley when art is added or a building with a colorful and interesting mural. Art is a game changer. Suddenly it becomes a point of reference, “You know, that place with the cool music mural . . .”

A couple of upcoming events will home in on the idea that places with art are places, indeed, and answer a human need. We want to gather and be near each other and art gives us reason and makes a gathering spot just that – a place where people like to gather.

The first of the two is Art Slam, which happens next week on First Friday. Dogwood Arts‘ Art in Public Places program is sponsoring the event in the spot most people would name if asked where to find alley art downtown: Strong Alley. It’s the alley between Market Square and Gay Street. It’s hard to believe it was so long ago a brave little group stepped forward to make this alley, which had served as a bathroom and worse, an attraction in the city. It was nearly six years ago I wrote about the first efforts.

In the time since those first efforts, it’s been refreshed periodically and rarely defaced, though many of us lamented the recent destruction of Brian Pittman’s last cathedral to have been drawn on an outside surface in the city. Much of the art remains in more-or-less its original form. Bistro lights were added and it’s hard to overstate the number of photographs taken there by wayward tourists, young lovers and camera enthusiasts. It was an alley, the art made it a “place.”

Bids will be accepted on each work and, “proceeds will benefit the restoration and production of outdoor murals in downtown Knoxville as part of an expansion of the Dogwood Arts Art in Public Places program.” Why is this happening in this place? Because artists before them made it a “place.” In case of bad weather, the event will be moved to Dogwood Arts at 123 W. Jackson Avenue. 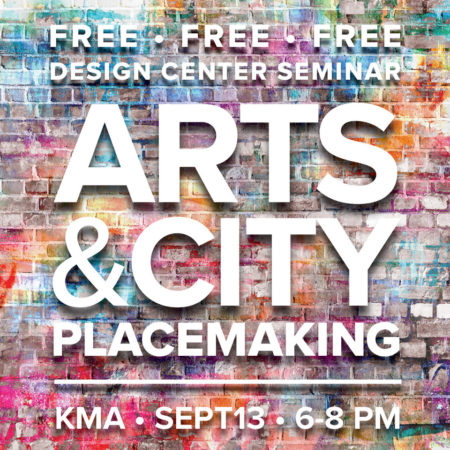 The second event deals directly with the ideas behind the connections between art and placemaking. Presented by the East Tennessee Community Design Center at the Knoxville Museum of Art, the Symposium on Arts and City Placemaking. It happens September 13, just a few days after the event mentioned above. It’s free and all the galleries in the museum will be open.

It’s a face-paced hour of tiny talks playing off the idea of arts and places. Our own Liza Zenni starts it off just after 6:00 PM addressing the topic, “Reimaging the City Through Culturally Significant Art and Murals.” She is followed by a couple of heavy-hitters from Chattanooga, Eric Asboe whose role with the DOT in Chattanooga focuses on public engagement will talk about the topic directly: “Creative Placemaking through Art.”

The final speaker is Josiah Golson, resident artist with the 800 Collective in Chattanooga and he’ll take on the sociological aspect, discussing, “Using Art and Placemaking to Raise Up a Neighborhood.” He’ll also lead an art activity during the reception that follows the talks, with a focus on emotional responses to place and art.

It’s good to focus consciously on why we are drawn to certain places and the role that art plays in that attraction. If we understand the kinds of spaces that people love and want to gather, we can encourage the development of more such spaces. We’re good. We can be even better. Check out these to events to experience that and to learn more.