2018 Asian Festival Bigger Than Ever 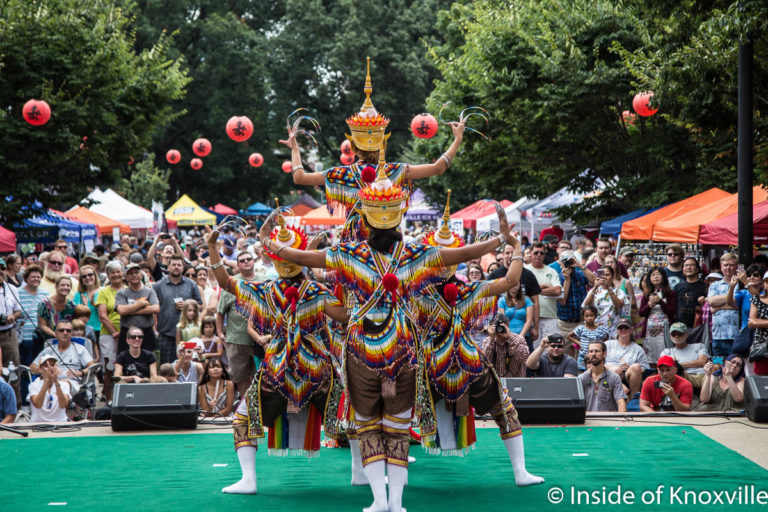 The organizers for the fifth annual Knoxville Asian Festival hoped and projected the festival might draw as many as 40,000 people to its expanded downtown footprint. This wasn’t simply a fantasy number. Last year the festival drew an estimated 30,000. If they missed 40,000, I’d be surprised. The new layout and the press of the crowd reminded me of the International Biscuit Festival. It was hot and it was crowded, even with the additional space.

Our current festival entourage includes two children, ages nine and three, plus three or four adults, depending. We are limited by the fact that I can’t get downtown before 11:30 or so from the radio show. Of course, we have the ace-in-the-hole of living downtown enabling us to come and go from the heat and crowds.

We were actually kind of lucky enough to have started the night before at Bistro at the Bijou. No, it wasn’t an official event, but we landed there for a late dinner and some early jazz and were soon joined by Mayor Takeshi Aoyama of Knoxville’s sister city, Muroran, and his entourage. The night got fun with dancing and a performance with a set of wood sticks I cannot identify. In the words of Bill Murray, “I want to party with you!”

The reality of arriving at 11:30 is that we’re hungry or near-hungry, so we watched the Thailand Dancers of Knoxville before breaking up to forage for food. Finding food isn’t hard, with nearly thirty food vendors representing a pretty broad range of nationalities and Asian cultures. We loaded up on noodles, rice, chicken and fried confections and retreated to the house for lunch.

After lunch we watched the Lion Dance by Wah Lum before scattering for a while to pursue our various interests and to cater to our various tolerance levels for heat and crowds. One thing that struck me as I walked around is how much cross-pollination has happened between various Asian cultures and western culture.

Western fashion and music has dramatically impacted Asia, which Asian pop-culture holds great fascination for a swath of American teens. To that end, witness the photograph of the American girls dressed as Anamae, an Okinawa-based blues band and a Japanese-American rocker. Even the government officials from Japan found their way to American Jazz.

As always, there were numerous activities for children of various ages and with various levels of interest in culture. I’ve never been able to convince Urban Girl to do the passports and take a serious turn at learning about the cultures, but she did pause to watch a full tea ceremony and she’s always about the henna – that perfect intersection of Asian and fashion – two of her big interests.

I watched some of the Taiko drumming, but the crowds around the Market Square stage were paced all day, so I never got a great vantage there. We talked about the crowds and tried to brain-storm solutions for a festival that seems to be destined to be overwhelmed by its own popularity. The World’s Fair Park? Additional footprint downtown? Gay Street? Two days? All of those possibilities contain obstacles.

In the end, this year, my favorite moments were the quiet ones: the tea ceremony and the bonsai trees. Like the festival that includes them, they are beautiful to see and to photograph. The images really tell the story, so I’ll let the ones here do the heavy lifting and leave it there until next year.