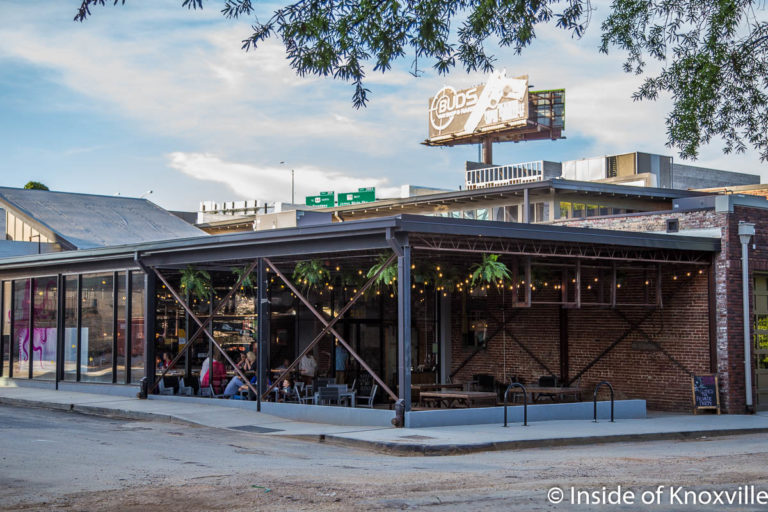 It hasn’t been that long since it was announced that chef Jesse Newmister planned to open a second restaurant after his Kaizen concept which has been so successful. It took just two months to open Tako Taco, and the results were displayed in a soft opening last night.

Located at 235 West Depot, the restaurant is currently in the shadows of the Regas Square condos construction project, at the corner of Depot and Williams. Just a short walk across the Gay Street viaduct from the 100 block of Gay Street, it is also adjacent to the Mill and Mine.

The restaurant features a beautiful sheltered outdoor eating area and an extremely attractive interior. Seating lines the bar which, though currently stocked with canned, bottled and draft beer, will soon feature wine and a full bar. One of Knoxville’s favorite bartenders, David Bowers. Seating also lines a counter facing the kitchen, allowing a view of the kitchen and a chance to interact with the chef.

The space itself features high ceilings, lots of windows and an industrial feel consistent with the Mill and Mine and with many of the projects completed by Dewhirst Properties. The seating is comfortable and the atmosphere casual. One of the startling little details that makes the place pop is actually beneath patrons’ feet. The floor was hand-stenciled by the crew from Robin Easter Design, with a pattern of tiny tacos. It’s the touch that you might not notice, but you’ll feel the impact.

The concept to offer tacos (all served on corn tortillas) with surprising ingredients, along with other small dishes has been developed to offer a great menu of light fare that is often vegan friendly and largely gluten free, while combining taste profiles like the culinary magician we’ve come to know through Kaizen.

As we do at these events, Urban Woman and I ordered as wide a range of dishes as we thought we could eat. We pushed the limit. The appetizer that we might not ordinarily order, but seemed so intriguing was the Nafta Fries, described on the menu as, “crinkle cuts, maple-mole gravy, cheddar curds, cotija cheese.” We enjoyed the dish and ate more than we should have before the meal arrived. It’s a perfect example of the manner in which Jesse combines surprising elements to make interesting food.

The tortillas were very good and we enjoyed everything in them (except I don’t like uncooked onions, so Urban Woman got a bonus). We’re from the gulf coast, so we’re picky about shrimp. These had good flavor and were nicely spiced. I liked the taste of the Tako Taco, but I’ve never been much for the chewy consistency of the meat, though these were maybe prepared to be less so. The mushroom taco was my favorite with a great combination of flavors.

We also ordered the chicken meatball, which isn’t so much a meatball as a strip of grilled chicken on a skewer (with mushroom tare). Each skewer order comes with two skewers and is perfect for sharing a light snack. That’s true with a number of the items on the menu: You can build a meal, but the items are perfectly suited to grabbing a quick bite while having a drink before a show or as a stop on a night out on the town.

The restaurant opens officially today and will initially be open Tuesday through Saturday, 5:00 PM – 10:00 PM each day. It will also be open for any Sunday or Monday night concerts with hours to accommodate concert goers.