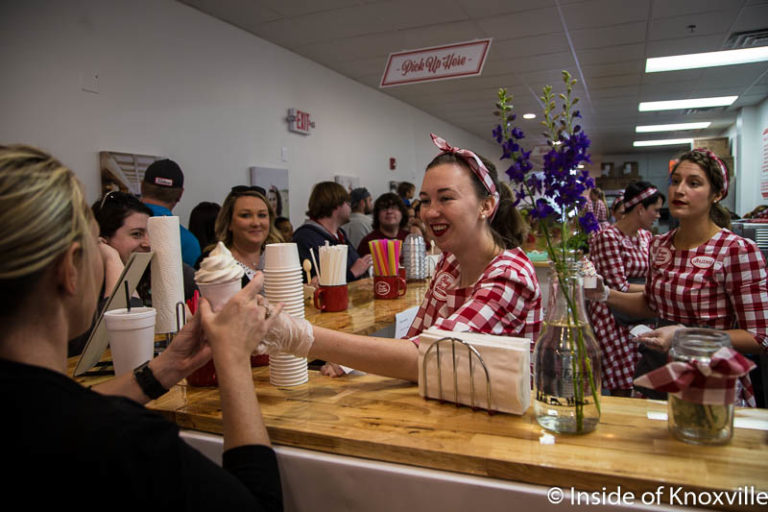 It’s been an increasingly open secret in recent weeks that something was up with Cruze Farm and a possible downtown location. Given the success of two pop up shops in downtown the last couple of years, anticipation of an announcement has been high. I recently spoke with Colleen Cruze Bhatti to get the details and now they are ready to announce their new location at 445 South Gay Street, Suite 3. It’s close to the corner of Union and Gay.

It’s a special spot historically in Knoxville, as the building was completed in 1905 as the home for Miller’s Department Store, a business it housed for almost seventy years. R. F. Graf designed the six story building which was one of the tallest buildings in downtown Knoxville at the time of its construction. It was stripped of it’s distinctive masonry and covered with reflective glass to “modernize it.” In 1998 the building was saved from demolition by KUB and restored to its original appearance by Duane Grieve. (Information thanks to Knox Heritage)

For Colleen, the building holds another historically significant designation: Her grandmother, Frances Louise Burkhart Cruze worked at the department store. Originally a teacher, she married the janitor, who also happened to be a farmer. She had to keep the marriage secret to keep her teaching job, ultimately giving it up to work on the farm. There she was known as a happy, loving woman who raised four children on a dairy farm, always working in her dress – a tradition continued by the Cruze family today in her honor.

She credits the current business successes to her partnership with her husband Manjit Bhatti. She says the two met at the Bistro at the B

ijou where, failing to get his attention, she paid $20 to another employee get his number. Now she says, “We are business partners, family and best friends. I don’t feel like this would be happening otherwise. I think it’s good to have a partner.”

She says both his parents are great cooks and he has the same talent. He’s taken over improving and developing recipes which has given her the opportunity to focus on the people who matter: customers and employees. “I think you really should treat people the way you want to be treated. You can’t just love food and cooking, you have to love people and build community through business. I love building a team and we don’t have high turnover.”

The above comment played out as I heard her ask an eighteen-year-old member of the team for her opinion on making the announcement of the new store. She pointed out they’ve been working on a permanent location for a Gay Street store for over a year. In the meantime, of course, they also opened the successful Cruze Farm Pizza Barn.

The new restaurant will have “fresh churned,” or soft serve ice cream. The mix for each flavor is made at the farm without the milk, which is added in store. Soft serve, she points out, has half the fat because it doesn’t need all the fat and sugar to achieve the consistency required for scooping.

Flavors out the gate will include sweet cream (their most popular), cookies and cream, coffee, chocolate and lavender honey. They’ll always have sorbet for people who are lactose intolerant or simply prefer it. They’ll also offer “churns” (think blizzard) and milkshakes, as well as floats. They’ll have affogatos, which involves pouring espresso over ice cream (I’m in!), as well as coffee, espresso and lattes.

You’ve probably already noticed the red awnings. There will be additional signage and the shop will feature a front area for ordering and prep, table seating and for Cruze Farm merchandise (including take-home ice cream and milk) while seating will be in a cozy area in the back with retro booths in bright colors. The walls will be decorated with chronological photographs featuring a day in the life of the farm. She wants people to know there is an actual farm – a question she gets often.

The store will have a main entrance on the street and handicapped accessibility through the atrium. The restaurant will employee thirty full and part-time workers, many of them UT students. Hours are projected to be Monday through Thursday, Noon to 11:00 PM, Friday and Saturday, Noon to Midnight and Sunday, Noon to 10:00 PM. The target date for opening is August 11.