Tako Taco: New Restaurant Announced for Downtown at the Mill and Mine 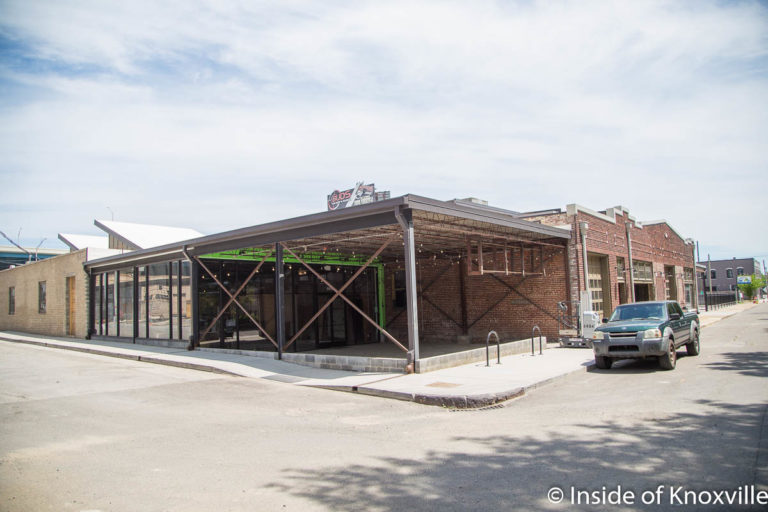 Chef Jesse Newmister announced the opening of his second restaurant in downtown Knoxville, as Tako Taco joins Kaizen, his original restaurant. While Kaizen has become one of the hottest restaurants in the city, Newmister is limited there by a small kitchen space and has wanted a larger kitchen in order to pursue his culinary vision to a fuller extent.

Mill and Mine General Manager Margaret Stolfi said the venue has waited for the perfect concept to present itself and they feel they have found it with the Latin and Asian fusion concept planned by Newmister. The Mill and Mine hosts both concerts and a range of other events. Over half the business consists of proms, weddings and various non-profit fundraisers and gatherings.

Newmister says the restaurant will initially offer a dinner menu, only adn he plans to be open Tuesday through Saturday, roughly the same hours as Kaizen, from 5:00 PM to 10:00 PM. Given the unique nature of the new location, he says he’ll likely open the restaurant on Sunday and Mondays if a concert is scheduled for the venue and may offer a smaller menu both prior to and after the concerts.

The restaurant is also likely to evolve as the neighborhood grows. It sits on the same street as both the Regas Square development and the Mews II development. The influx of new residents, certain to shape the neighborhood, could present the opportunity for expansion of hours. While he’s excited to offer dishes he is unable to offer from Kaizen’s small kitchen, he feels it is best to start simple and learn what works.

Jesse has been particularly pleased with his staff at Kaizen – it’s remained practically unchanged for the full two years they’ve been open – and he doesn’t want to negatively impact the team in place there. That said, there will likely be some overlap of staff and General Manager Matt Kilgore from Kaizen will play a significant role in the new restaurant. Jesse feels strongly that a positive work place is critical to the kind of restaurant he wants to run. He’s recently added health insurance as a benefit to his employees, for example, and he believes strongly in paying a living wage.

The cuisine in the new restaurant will be, “street food inspired,” and will focus on a Latin, southeast Asian and Chinese base. The word, “tako” is Japanese for “octopus,” which might give you a hint of what is to come. You’ll find tacos of a very non-traditional variety, including, yes, octopus tacos. He’ll offer some of the small plates he’d hoped to offer at Kaizen, but didn’t have the facilities to bring to fruition. He also promises a, “fun exploration of spices,” and points out that he’s already been trying out menu items, particularly via the catering he did at the Mill and Mine during Big Ears.

The restaurant will feature a full bar and one of the best and largest outdoor seating areas in the city, with a capacity for fifty people both inside and outside the restaurant. The patio faces the lovely, tree-lined Depot Avenue. Stolfi said, “We’re about to be a true neighborhood and our building is growing along with it.” She says it has sometimes been an adventure with two other major building projects, as well as their own, and tour buses coming and going. Sometimes cranes and buses have had to do a dance to make it all work.

She says the dual line kitchen allows for a new level of support for events in the venue. One type of event she’s excited about, which is now a possibility, is visiting chef events, such as when celebrity chefs are visiting the city on promotional tours. Newmister says servers and guests have to be sold on what you are doing and he intends to do just that.

R2R Studio, Robin Easter Design and Dewhirst Properties construction crews are bringing the new business to life, while Jesse has had large input in design of the kitchen. The hope is to have the business operational by August. In the meantime, follow them on Facebook, Instagram and Twitter – and watch for the cool fuschia octopus to make an appearance.