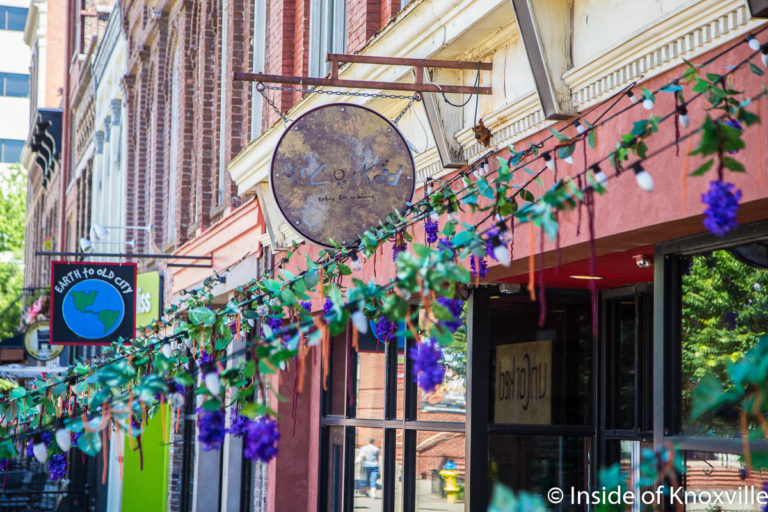 Downtown in this era is a constant re-working of a giant jigsaw puzzle of shifting shapes. At the vortex of much of that change has been the West family and their various enterprises. Their businesses on Market Square currently include Uncorked, Earth to Old City, Preservation Pub, Scruffy City Hall and Market House Cafe. Changes are coming to a couple of those even as they continue to prepare the debut their newest endeavor, Bernadette’s Crystal Barrooms.

Bernadette’s Crystal Barrooms will occupy 26 Market Square, the previous home of Rita’s Ice. The building was purchased by the West family and construction permits were issued about three weeks ago. The first, major, phase included digging out and expanding the basement. The building will include the basement, ground floor, second floor and a rooftop which will merge with the Preservation Pub rooftop, to create a rooftop like no other as it features the magic beer tree and promises to include additional major installations (crystal!) and four bars.

The bar itself promises to be like no other, with crystal bars, a crystal stairwell and a geodesic dome on its top. It should have an entirely different vibe from the adjacent watering holes, while continuing the fun atmosphere. Scott West says he’s hoping to have it at least partially open in August.

In the shorter-term, you’ll notice some other changes brewing among the various businesses. The kitchen in Uncorked will become the center for all things cooked and baked for all the businesses as Market House Cafe undergoes some changes and operations are moved from the underground kitchen at Preservation Pub. Market House may close temporarily, or may curtail operations during the changes.

One change that will be permanent is that Uncorked will become a full-day business, serving breakfast, lunch and dinner. Coffee, juices and baked goods like those enjoyed at Market House Cafe will be available, along with many of the breakfast and lunch menu items customers have enjoyed there. This also presents the opportunity of, not only coffee, but a Bloody Mary, Mimosa or other adult breakfast beverage any day of the week.

Baker Rosemary Le will lead the charge in the kitchen and all employees from Market House will have positions in the new operation. The Uncorked menu will be available for dinner, taking the location through the dinner hour and into the night with the bourbon bar and wine bar.

I asked Scott when he’s going to slow down and he said he already has – before launching into details of his other major projects currently underway. He’s considering forming a record label, for example, and his band is recording a new disc as a possible first release. And then there are the four books corresponding to walking tours in the city.

He says they are “pocket size, about a hundred and twenty pages,” and he suggests that the contents may be mostly true. He says, “There is truth in the entertainment, but I’m not fixated on facts and I’m less concerned with footnotes.” The idea of the books (and tours they each represent) is embodied on the back cover which states, “Great Cities are Built on Great Crimes.” He promises murder and mayhem, sordid and twisted stories and more.

The books will sell for $4.95 and he says the profits will be donated to the Knoxville History Project and the Downtown Merchants Association and perhaps other groups. He’s donating $1000 to the Knoxville History Project as a down payment on anticipated profits. You’ll be able to pick up copies at each of the West businesses, and perhaps other local merchants.

The books cover different areas of downtown and the group will be released simultaneously within the next couple of weeks. “The High Road,” will focus on Market Square and Gay Street, while, “The Low Road,” will focus on the Old City. “The River Road,” will tackle the river and south Knoxville and “The Highway to the Sun,” will take a trip through the World’s Fair Park and surrounding environs.

It’s not the kind of walking tour you might find officially promoted in a city, but it’s the kind of juicy details about the darker side of a city that many people enjoy. It’s all based on truth, but it’s intended for fun, not so much for scholarship. Watch for Lost Tales of Scruffy City very soon. And look for more business news coming from this re-shuffling in coming weeks.